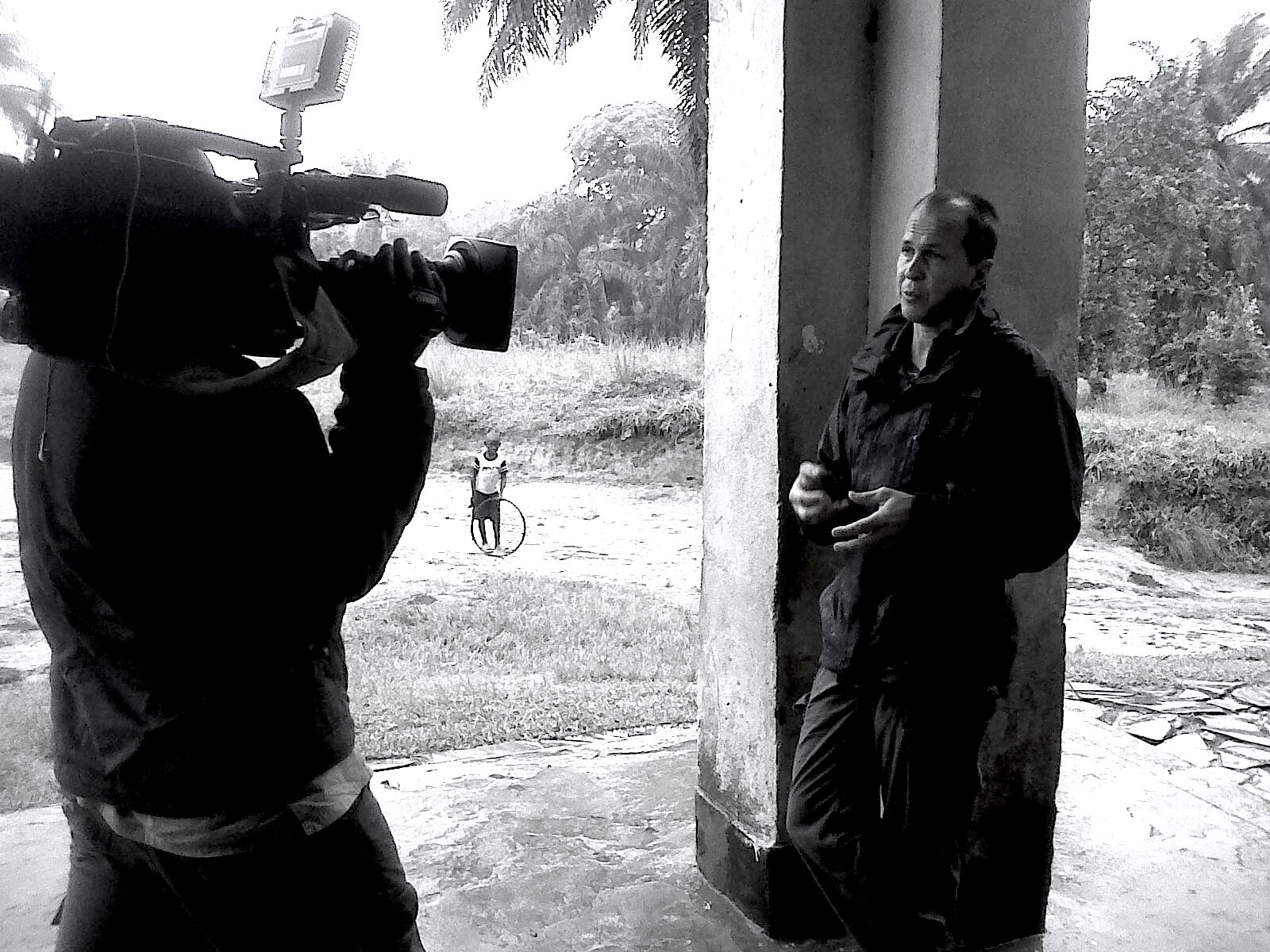 It was the sortÂ of rain that drenchedÂ your pants, an unrelenting soaking that moulds skin to cloth.

I was withÂ Al Jazeeraâ€™s correspondent Peter Greste, cameraman John Kinyua, and our fixer Jacob* inÂ a small town called Walikale, in the eastern Democratic Republic ofÂ Congo. We were in the middle of an old fashioned stakeout outside of a primary school, and the rain just wouldn’t end.

Somewhere inside the primary school, a “politician” (read: warlord) with an arrest warrant outstanding from theÂ International Criminal Court, was hidingÂ away from the prying eyes of UN peacekeepers, the police and the DRCÂ army.

We were in the eastern DRC to cover the presidential and parliamentary elections in November 2011, and Peter had gotten word that Ntabo Ntaberi ShekaÂ would be holding a rally in this district in the coming days. It was my first trip to the DRC, and I hadnâ€™t known much, if anything at all, about Sheka.

Even with the allegations ofÂ crimes against humanity attached to his name, he was not aÂ big fish as far as rebel leaders go. Sheka’s storyÂ was merely an anecdote in a greaterÂ story of democratic dysfunctionality in the DRC. Here was a relatively unknown man, wanted for war crimes, running openly for parliament -Â He was the very embodiment ofÂ impunity, injustice and the fallibility of the ballot, in the DRC.

With more than a dozen rebel groups, factions within factions within this resource-rich, and abundantly confusing nation, Peter understood that each story of pain and loss was aÂ footnote in anÂ addendum to the greater story at play. And he was prepared to chase them all.

But in the town of Walikale, surrounded by lushÂ rain forests, ShekaÂ was nowhere to be found.

We understood he was likely to be in one of the rooms, inside or behind the school. But there was no way into the school, not with throngs of rebels with RPGs resting on shoulders and semi-automatics affixed to their sweaty palms, millingÂ around the school. We had to wait it out, despite the pressures from editors to file. And when our Land Rover sunk deep into the sludge outside the school,Â we had no choice but to stick around.

Jacob, our fixer, aÂ hustler who translated and connected journalists with the localÂ community, and someone who sold “souvenirs” from the jungle (in this case heÂ offered me â€œliquid mercuryâ€ at a discounted price), swore heâ€™d get us an audience with Sheka. So we waited while he made his calls and we made ours.

He said he had gone to the same school as Sheka or Sheka’s spokesperson. And it was possible. Given the sparse number of homes and schools in theÂ area, they might’ve all even been related.

Regardless, as we waited, watching for any sign of movement, curious school children dressed in oversized but torn uniforms tiptoed nonchalantly between the armed fighters to catch a peek of us, theÂ anxious strangers. In the distance, with other classesÂ in session, hymns bounced off the classroom walls, out ofÂ broken windows, reaching us underÂ the soft, drenching rain.

And then we realised,Â Sheka, fugitive from the ICC was using these kids as humanÂ shields.

No one could venture into the school without it becoming aÂ bloodbath.

But Sheka did eventuallyÂ emerge.

With hundreds around him, he marched toward the town centre on the dirt-track-turned-mud-bath, dressed inÂ military fatigues,Â aviators and dark boots.

Villagers emergedÂ from their homes alongside the road, watched or joined the procession.

HisÂ political rally had begun. The UN and the police stood back, and watched.

Peter rushed to theÂ Land Rover,Â grabbed the tripod and went after Sheka.Â John unlocked the bags, and grabbed aÂ camera withÂ waterproofing already affixed. Jacob and I grabbed ourselves and gave chaseÂ as well.

We slipped and slid, as passerby’s watched, amused by our silly struggle with the sludge.

BesideÂ us, young men and boys marched with guns older than themselves. The platform, Shekaâ€™s pavilion, was a broken down,Â abandoned, open top, flatbed trailer, that was leftÂ right in the middle of the town.

Behind Sheka, a vendorÂ selling roasted dry fish, nuts and roasted baby monkeys, stopped to watch.Â To his left and right, others gathered on trucks and under leaking roofs of the surrounding buildings to witness the proceedings.

True to his word, Jacob had arranged the one-on-one with Sheka just moments before his rally was about to start.

In the mayhem and the rain,Â the squadrons of soldiers surrounding the flat deck, and screams and songs of well-wishers, I wonderedÂ what PeterÂ would ask Sheka. He would have little more than two minutes toÂ conduct an interview we had allÂ spent theÂ better part of two days,Â sitting between the trees, nibbling on boiled eggs, and over-ripe bananas, trying toÂ arrange.

There was no time for professional niceties, toÂ buddy up, so to speak, before dropping in a series of “hard” questions as any respectable journalist would, while in conversation with a low-level lawmaker in a provincial locality, like, say, Barnsley.

ThisÂ man was an indicted war criminal, leading a band of fighters, including child soldiers, and running forÂ elections. Where do you even begin?

But Peter had the stomach for this. He showedÂ no inclinationÂ toward stage fright. Surrounded by trigger-happy rebels, an impotent localÂ police, a nerdy UN peacekeeping force, and a crowd assembled either out of fear or devotion, Peter went straight for the jugular.

“How do you plead to the hundreds of charges of mass rape?”

AmidÂ the buzz of the crowd and the gentlyÂ soakingÂ rain, the world seemed to stop for an instant. Shekaâ€™s guards turned their backs to the crowd and peered at us expectantly. John picked his eye off the viewfinder for a second to catch a glimpse ofÂ Sheka. Jacob tiptoed to the edge of the flat back. I just watched.

The journey back to the Monastery, our place of rest, I can report, was a hurried affair.

Read the storyÂ and/or watch his report below:

*Name changed to protect his identity

Azad Essa is a journalist at Al Jazeera. He is also an Executive Editor at The Daily Vox

And what about Sheka? Three years later, he is still free, racketeering in theÂ jungles around Walikale. The UN says they are able to arrest him, but need political backing from Kinshasa, which has not been forthcoming.