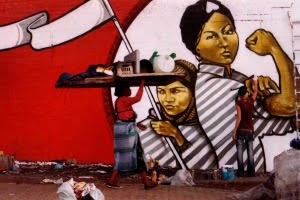 MADODA MKHOBENI spoke to MBALI ZWANE about documenting the everyday struggle of people who are trying to make a living in the city. Photography allows me to venture into various places and spaces in the city. Being able to document everyday life enables me to meet people and understand their stories and some of the obstacles that they’re faced with on a daily basis. When I was studying journalism at a college in Braamfontein, I met a vendor selling the Kitso newspaper, a youth publication that gave youngsters a platform to hone their media skills. I went to their offices while I was in the second year of my course and they offered me an opportunity to write stories for them, with a particular focus on Johannesburg CBD and townships. My major challenge was getting photographs for my stories. Sometimes the photographers in the office wouldn’t deliver photos so my stories were published without pictures. That’s when I decided to buy myself an analogue camera and started capturing photographs of wherever I was. Whether it was downtown Joburg, an event, or the township I live in. As a self-taught photographer, I began to realise technical things about my photographs that I didn’t like – for example, the exposure was awful. So I decided to enrol myself in a beginner’s course at the Market Photo Workshop in Newtown, concentrating on film and the technicalities of capturing photographs. In 2009, I completed the Photojournalism and Documentary Photography Programme, which really helped my career. Soon after that, I helped to established the Soweto Photo Album Collective and participated in numerous local and international group exhibitions and projects. Johannesburg is an elusive and complex place, where many things are happening. Through the years, things have shifted while other things, like poverty, remain constant. Vendors are still operating from dawn to sunset, the city outskirts are occupied by informal recyclers with their trolleys, and women still holding on tight to their bags when they walk the streets of the CBD. There’s different people here with different circumstances but they’re all battling for one thing, which is making a living. Spaces are the most important thing to me when I am taking photos, and on most days, these spaces aren’t comfortable. There’s a ton of stories to tell, especially the dark stories about the people living in the city. But it’s a bit difficult to get to the core of these stories because people question everything. They’ll ask me why I’m standing next to them, why I’m taking a photograph of this and why do I want to photograph them when there’s other people in the city. These actions make it difficult to tell their stories, the way they would like their stories to be told, Â or share insight into living conditions in the city and everyday challenges. I sometimes wish I could be invisible, because that way, I’d be able to capture things in the CBD without any interference. All photos by Madoda Mkhobeni.

Mkhobeni is currently a freelance photographer and has published photographs in various news and photography media including Camera Austria, Le Monde and South African newspapers and magazines.