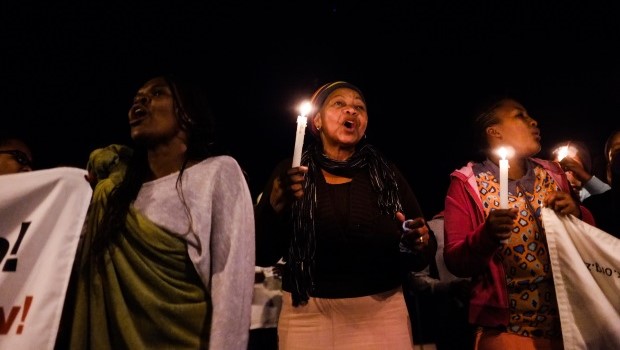 Tuesday, 16 August marked four years since the Marikana massacre, which was commemorated nationwide. In Cape Town, protestors from the social justice organisation Right2Know gathered outside the SABC’s Sea Point offices and held a candlelight vigil for the slain miners. As part of their ongoing protests against censorship at the SABC because it won’t screen Rehad Desai’s award-winning documentary, Miners Shot Down, they projected the documentary on the outside wall of the public broadcaster’s offices. BARRY CHRISTIANSON was there.Â Many protestors draped themselves in green blankets in memory of Mgcineni “Mambush” Noki, who came to be the face of the miners’ protests and was one of the 34 workers shot and killed by police. Young and old alike were represented at the vigil. Protestors gathered to watch the documentary on the walls of the SABC’s offices. Many still blame the ANC government for the massacre, as evident in the placards they carried. Barry is a street and documentary photographer living in Cape Town, interested in how people interact with various spaces around the city.