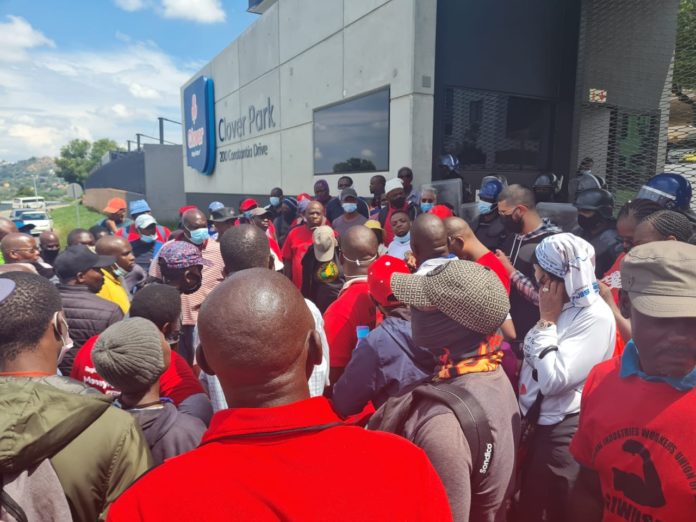 The campaign against MILCO/CBC, the Israeli consortium that owns Clover, has intensified in recent weeks. Workers have been on strike against the company since 22 November, protesting exploitative labour practices, unjust employment conditions, and Israeli imperialism. Events like these highlight the importance of solidarity and collective action to topple injustice. The plight of these striking workers and that of the Palestinian masses are sadistically entwined in the merciless arms of colonial occupiers. Now is the time to stand together by supporting the demands of striking workers and boycotting Clover.

When Clover was bought by MILCO in 2019, the Competition Tribunal imposed several conditions on the merger. Among these, the company was tasked with creating new jobs and not retrenching workers for at least three years. At the time, MILCO reported a worst-case scenario of 277 workers to be retrenched. However, after just two years, over 748 workers have lost their jobs due to the merger, with hundreds more under threat.

The tribunal’s report also makes mention of GIWUSA’s contention that the transaction should be prohibited because MILCO is owned by a consortium based in illegally occupied Palestine. Unfortunately, it dismissed this as a matter outside of its jurisdiction. We condemn such flagrant apathy shown by the Tribunal on a matter of significant moral concern. International economic measures were imperative to end Apartheid in South Africa. If our lawmakers acted with moral fortitude, such measures would be critical to ending Apartheid in Palestine as well.

Despite MILCO’s R4.8 Billion investment in the takeover, no one (except perhaps the Competition Tribunal) was under any illusion that labour conditions would improve. An Israeli conglomerate that violates international law with impunity would have scant regard for their workers in South Africa. Indeed, Clover workers are subject to gruelling working conditions. Many must spend hours in freezing refrigerators without protective clothing or equipment. They are separated from their families, working long shifts as lone drivers for up to seven days a week. They are regularly made to work overtime indiscriminately and without warning. On top of this, workers face salary reductions, job losses, and the forced imposition of public holiday work and twelve-hour shifts which are inhumane austerity measures that cannot be accepted.

This is not the first time Clover workers are striking against MILCO. Last year, workers were being paid housing allowances of R140. A decent room at the Winnie Mandela shack settlement near Clover’s Clayville factory, costs about R1500 per month. While striking against this and other abhorrent conditions, police opened fire at protestors. In the process of fleeing, one worker, Khilson Manaka, was killed in a hit-and-run. “Live in squalor, or fight back and be killed,” is a message that displaced Palestinians are all too familiar with. Last year, MILCO showed that they have no qualms with applying these same conditions to South Africans.

This year’s demands are not far removed from those of last year. Workers still demand an end to MILCO, an end to retrenchments and factory closures, dignified working conditions, salaries and benefits. The campaign is led by militant, revolutionary workers. It is not just a campaign for better workplace relations, but for a better society. Demands for better wages and working conditions are demands for families to have food on the table, spend quality time together, and dignified living conditions. Demands against factory closures are demands to restructure urban-peripheral relations in ways that do not leave former Bantustans as sites of surplus labour and extraction. The demand to nationalise MILCO is a demand for the South African government to step in to provide food security, employment, and dignity to a country with more than half its population below the poverty line and record levels of unemployment. It is a demand to kick Apartheid off its shores.