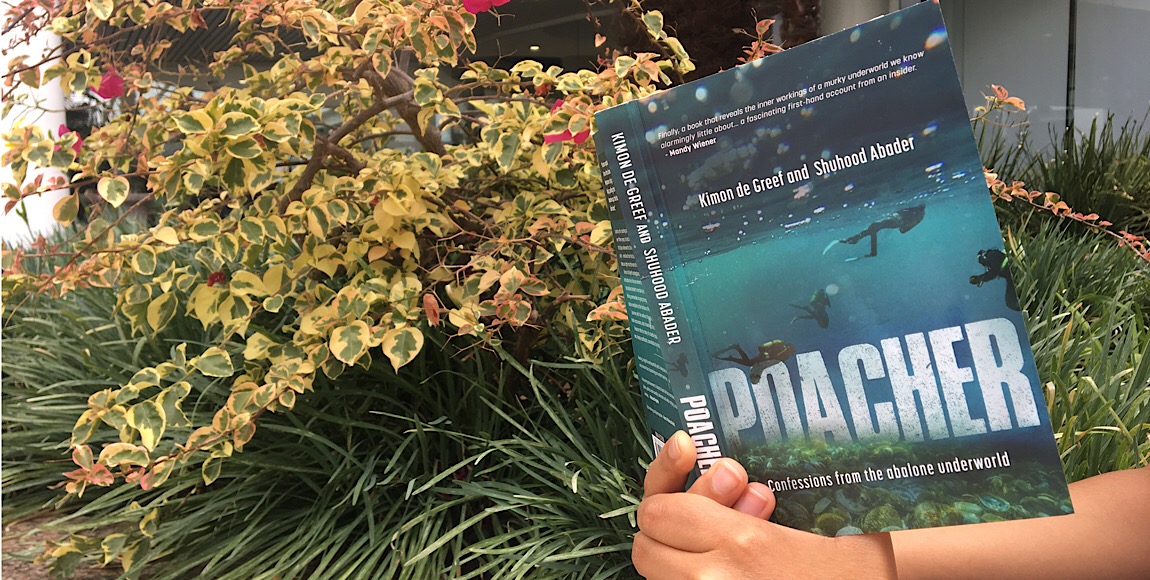 Co-authors of Poacher: Confession from the abalone underworld, Kimon de Greef and Shuhood Abader look visibly tired as we sit down for our interview about their book. They later tell me this is the fifth interview for the day. It’s easy to see why they are in such high demand. The book and the story it’s telling is an anomaly for the South African landscape.

Poacher is a book about Abader and his time as an abalone poacher. Poaching of the small maritime creature has become an extremely lucrative criminal business in South Africa. In high demand in China, tons of the creatures are poached and shipped east, forming an integral part of the black market. The poaching of abalone has caused much outrage in South Africa, especially with regards to the environmental impact the extinction of the creature might have. The book attempts to shift that narrative.

During his time in prison for poaching, Abader started writing his story using a typewriter with a limited access to paper. After several failed attempts to get the book picked up by publishers, he was told to get in touch with de Greef who had been working academically and journalistically on the issue. The two met in 2017, formed a partnership and begin writing the story even though most of the history of Abader’s poaching career had already been written. “I was not interested in standard poaching narratives which are very narrow and overplayed. We should be talking about the society that breeds poachers and where rule of law is a fantasy and not something to live,” says de Greef.

The story is told in a very unusual way. It focuses on Abader’s family history of apartheid displacement as much as on the actual poaching industry. The narrative of Abader’s life and how he got into poaching is interspersed with the facts about poaching. It is a very contextual heavy story about how abalone became a huge status symbol in Asia to how Abader made the decision to join the illicit trade. It makes the book an easy read, but makes the events less real at times. Abader brought his life story to the table, and de Greef brought his knowledge of the industry and together those were weaved together.

De Greef says this was a project unlike any other he had worked before with Abader being a partner rather than a source. “I tried to do something that hasn’t been done before with co-authored non-fiction. We need more of this approach to non-fiction – ultimately what we need in South Africa is more people writing their own stories,” says de Greef.

Abader says the process of writing and putting his experiences on paper was challenging especially with his limited resources. “I had limited paper and I would crumple it up and then smooth it,” he says. Initially Abader says he wanted to write the book to make money from it but “The motivation changed to telling people the story. Kimon actually wanted to make the reader have empathy towards poachers,” says Abader.

Many of the conversations around poaching in general in South Africa revolve around the morality of it – and what poaching means for the destruction of a species. De Greef says: “It would be pointless to talk about poaching without talking about the society in which poaching happens.” The book wants people to understand the unequal system which breeds poachers – while stripping away the morality and judgement. “To people who get outraged about poaching I say to them, let’s get outraged about the systems that created them.” says de Greef.

In the book, de Greef says Abader told him during their first meeting that he didn’t mention something important in his poaching stories: “It’s the whites that started all of this.” When asked about this, Abader laughs a little before answering. “White people started this long before any of us and before there were any laws about this. The sad part is that because black and coloured people have started with this it’s become a big problem. I’m not shy to say about this but a few white people have enriched themselves with it before the laws were put it in place.”

It is issues like this and other socio-economic ones that display the complexities of abalone poaching in South Africa.

The abalone poaching industry form part of the much greater illicit financial flows system. This is a system as de Greef says requires access to violence and is controlled by gangs with many connections. Abader wants to distance himself from that system in a way. “For someone who has been doing this for many years I’ll say I’m at the bottom of the chain as a diver. I don’t get paid by a drug dealer.” he says.

Moving forward beyond even the book, Abader hopes government steps forward to take accountability about the illegal system they helped create.

“The government should face some accountability for not creating quotas for poorer communities, and instead giving the quotas to only a few. Government should say they messed up with the abalone industry,” Abader says.

The book is available at all good bookstores and online.