Home Features What is the point of peacekeepers in the CAR if they are...
WhatsApp
Facebook
Twitter
Email
Print 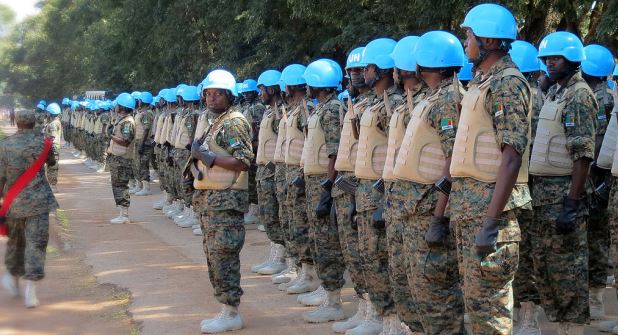 The United Nations has been urged to extricate itself from investigations into the conduct of its peacekeeping forces in the Central African Republic. According to Paula Donovan, co-director of the Code Blue Campaign to end impunity for sexual exploitation and abuse by UN peacekeepers, the United Nations is not in a position to investigate claims of sexual abuse committed by its own peacekeepers and must step aside to allow the law to take it course. DANA DA SILVA explains why.

“We are saying that the UN should recuse itself in the law enforcement in assessing the crimes and in determining who should hold responsibility and be accountable for those crimes,â€ Donovan told Al Jazeera.

Her comments come after Congolese peacekeepers accused of sexual offences in CAR appeared before a military tribunal in the DRC.

And allegations of abuse continue to ring out against the UN in CAR.

But as early as February this year, human rights organisations have criticised the punitive measures proposed by the UN against sexual offenders in its peacekeeping forces.

â€œIn a country where armed groups routinely prey on civilians, peacekeepers should be protectors, not predators,â€ Hillary Margolis, womenâ€™s rights researcher at Human Rights Watch, says. Â â€œSending peacekeepers back home is not enough. The UN needs to insist that troopsâ€™ home countries bring rapist and other abusers to justice, and that survivors get the support they need.â€

The CAR has been described as â€œan epicenter of sexual abuse allegations against United Nations peacekeepersâ€. And the litany of allegations of sexual offences come amid criticism of the capacity of the peacekeeping force. In a report released in February, Amnesty International said, people in the CAR are still at risk of violence and instability unless weaknesses in the peacekeeping mission are immediately addressed.

The report highlighted Amnestyâ€™s concerns that the Multidimensional Integrated Stabilization Mission in the Central African Republic (MINUSCA) is not properly equipped to deliver its mandate and its weaknesses must be addressed.

The CAR is one of the most challenging environments for peacekeepers, with different armed groups threatening the population and undermining the countryâ€™s stability. Stephen Cockburn, Amnestyâ€™s International Deputy Regional Director of West and Central Africa, said that the current condition of the peacekeeping force needs to be seen in this context.

â€œWorking in such a context requires a well-equipped and highly-skilled peacekeeping force able to do all the things that the UN Security Council has asked it to, including protecting civilians, ensuring justice and supporting the political transition,â€ said Cockburn. However, Amnestyâ€™s research shows that that they lack the adequate equipment and training as well as sufficient manpower to operate effectively.

MINUSCA was set up by the United Nations (UN) in September 2014. It was during this time that the country suffered through the most intense period of conflict, where over 5, 000 people were killed and almost one million were displaced.

Since then, the UN peacekeeping force has had its ups and downs, with Amnesty International now calling for a major review of what they call an â€œapparent failure to protect citizensâ€ during an outbreak of violence in September 2015. This includes MINUSCAâ€™s ability to carry out its mandate, which covers factors such as equipment, training, coordination and civilian personnel.

This failure, which the report speaks about, was uncovered during a three-day surge of violence which broke out in the capital city of Bangui. During the violence, 75 people died, 42, 000 were displaced, 500 detainees escaped from the cityâ€™s main prison and at least a dozen women were raped. All of which happened in one district, on the first day.
While MINUSCA has stepped up its game since then, Amnesty International says that without more measures to strengthen the force, new outbreaks of violence will continue to threaten the countryâ€™s stability and security. It doesnâ€™t help that by the end of the year the majority of the French forces, which have provided essential support, will be withdrawn.

â€œOperation Sangaris, which has 900 well-equipped personnel, has played an essential role in supporting MINUSCA to operate. If they leave by the end of the year, as announced by the French Minister of Defence, this would leave a major hole unless MINUSCA was sufficiently strengthened to compensate,â€ said Cockburn.

The publicâ€™s opinion of MINUSCA has also been mixed. â€œDissatisfaction has been growing because of a feeling among some communities that MINUSCA is not there to protect them, but just to patrol the main roads. Overcoming these perceptions will be critical to cooperating well with communities, and gathering the type of intelligence that will help anticipate and prevent violence,â€ said Cockburn.

MINUSCA, however, continues to play an important role in the CAR.

â€œWe continue to support their presence in CAR, but believe that they need to have the tools to do the job effectively,â€ said Cockburn.

But if the United Nations is indeed at a positive influence in stabilising the CAR, the organisations must review the forceâ€™s mandate and its capacity to perform. But importantly, any capacity issues cannot be divorced from the ability of peacekeepers to respect the human rights of the populations they are meant to serve.