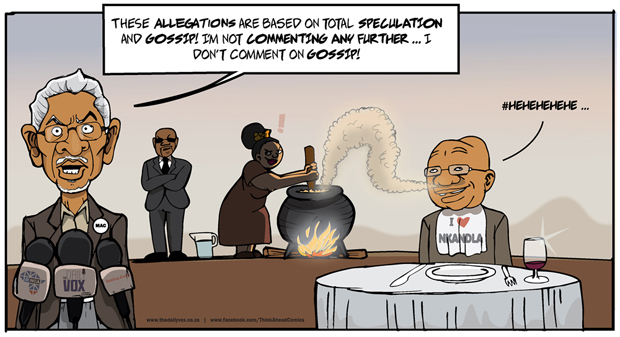 On the weekend The Sunday Times published sensational claims, relying on anonymous sources, alleging that President Jacob Zumaâ€™s second wife, Nompumelelo Ntuli-Zuma was involved in a â€œpoison plotâ€ against her husband. Weâ€™re kinda disappointed that thereâ€™s nothing about this in the Spy Cables.

This isnâ€™t the first time Ntuli-Zuma has been the subject of rumours about the state of her relationship with Zuma: speculation that she had an affair with her bodyguard continues to haunt her.

Meanwhile, with no hard evidence at hand, presidential spokesperson Mac Maharaj has dismissed the report as gossip and speculation. Ma Ntuli didnâ€™t do it. Nobody saw her do it. Canâ€™t prove anything.