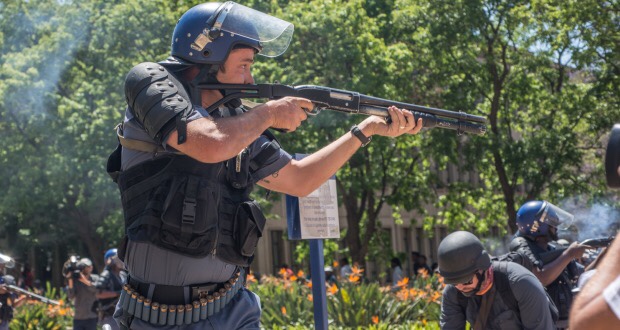 Over the past several weeks of student protests, members of the South African Police Services (SAPS) have been criticised for using undue force, including shooting rubber bullets at retreating students and firing stun grenades into crowds without warning, to disperse protesters on and off campuses. Incidents such as the shooting of Shaeera KallaÂ 13 times with rubber bullets and the shooting in the face of Father Graham Pugin come to mind.

Father Graham Pugin from the Holy Trinity Caholic church shot with a rubber bullet after blocking the entrance of the church. pic.twitter.com/jB8h0LTAiX

Despite the seemingly random use of force exercised by police in the protests, there are actually specific guidelines under which the SAPS can use such crowd control measures, but these have not always been followed. â€œWe have witnessed wanton brutality by certain police, which is completely out of their regulation,â€ said Murray Hunter of the Right2Know campaign.

The ministry of police has a policy document which guides the way that members of the SAPS ought to carry out their duties. Further, National Instruction 4 of 2014 provides explicit guidelines for police officers regarding the use of force.

The guidelines on policing public protests states that the policing approach must be consistent with:

Public order policing is carried out by crime combating units within the operational response service who are members of SAPS with dual duty of combating crime and managing crowds during protests and gatherings. â€œPublic Order Police commanders and members are specifically trained in crowd management and the use of minimum, proportional force to use to restore order in specific situations,â€ national police spokesperson Sally de Beer told The Daily Vox.

These officers differ from the ones doing routine police duties, and are provided with specialised equipment Â for crowd control, including body armour, helmets, shields, batons, water cannons, armoured vehicles, specified calibre firearms and ammunition, and communication and video equipment.

SAPS members must use discretion in dealing with different protest situations, but they are always required to use minimal force, even when it is necessary to prevent people from being injured or property from being destroyed.

Section 9(2) of the Regulation of Gatherings Act (RGA) requires members of SAPS to make every effort to manage the crowd at a protest or gathering so as to prevent confrontation and violence.

In the case of dispersing a crowd, for example, the policeâ€™s first resort should be engagement with leaders. According to the the RGA, â€œSAPS Commanders must have negotiation skills and be able to use these skills during gatherings. In the case of a planned gathering, the commanders must be able to negotiate with the organisers of the gathering, or the person nominated for this purpose, as and when required or necessary. In the event of an unplanned gathering, commanding officers must be able to identify key leaders from the group with whom they can negotiateâ€.

It is only if these measures fail when, according to the RGA, a police officer with at least the rank of warrant officer, who has reasonable grounds to believe that the demonstration poses a danger to persons or property may:

The UCT Law Faculty explained the process in a statement released after the 2015 #FeesMustFall protests, as follows:

â€œIt is only after these steps have been taken and those gathered have not dispersed that a member of the police may order members of the SAPS under his or her command to disperse the persons concerned. When dispersing those gathered the police are required to use minimum force and are prohibited from using weapons likely to cause serious bodily injury or death. The degree of force which may be used may not be greater than is necessary for dispersing the persons gathered and must be proportionate to the circumstances of the case.â€

As weâ€™ve seen, many times over, during these protests, this is not always been the case.

Police use stun grenades and open fire on group of peaceful demonstrators, continue to fire at injured students. #Wits pic.twitter.com/1VqXmrpTCL

The use of specialised equipment for dispersing protesting crowds is governed by specific rules set out in National Instruction 4, which regulates the types of weapons and ammunition that may be used by the police during public gatherings or protests. This includes the following:

1. Pepper spray
Pepper spray is part of the standard arsenal of weapons issued to operational police for their everyday duties. Pepper spray is a chemical compound used to irritate the eyes, and is capable of inducing temporary blindness. It is prohibited, unless the relevant commander has issued a specific instruction for use. Pepper spray may not be used in confined spaces or in stadia, where it could lead to a stampede.

2. Stun grenades
Stun grenades are explosive devices which are used to temporarily disorient crowds, suspending vision and hearing. They are part of standard crowd control equipment, and may be used after verbal attempts to control crowds fail to work. Police training manuals state this must never be thrown directly at protesters, and must be rolled to avoid injury.

3. Teargas
Although there is no explicit mention of teargas in police policy documents, it can be considered a means of â€œmechanical forceâ€. Mechanical force involves the use of some device or substance, other than a firearm, to overcome a subjectâ€™s resistance to the exertion of the law enforcement officerâ€™s authority. Teargas may be used only by trained police officers on the command of the operational commander in situations that allow for its use. Teargas may not be used in confined spaces or in stadia where it could lead to a stampede.

4. Rubber bullets
National Instruction 4 restricts the use of rubber bullets, which may only be used to disperse a crowd in extreme circumstances, if less forceful methods prove to be ineffective.

The Right2Know campaign has greater detail on the specific instances under which police can use force against protestors, which you can read here.

So are the police justified in their actions?

â€œThere has been a context in which violence occurred, yes, but also unlawful behaviour from police is a big driver of conflict,â€ said Hunter. He also cautions against viewing violence on either side of the conflict as unquestionably excusable. â€œThere are two narratives out there: one, that the police are completely justified in their use of violence, and two, that all tactics that students are operating in are above question.I donâ€™t think that either are true.â€

â€œThe regulations are clear that police may only use force when it is absolutely necessary to prevent injury or death or property destruction, and that force must be proportional to the situation. We’ve seen many situations where police use of force has been completely unproportional and where violence has been used as a force of punishment. When someone gets shot in the back 13 times, that is violence as punishment,â€ said Hunter.

Editor’s note: An earlier version of this piece incorrectly stated that National Instruction 4 bans the use of rubber bullets. This has been corrected.Â