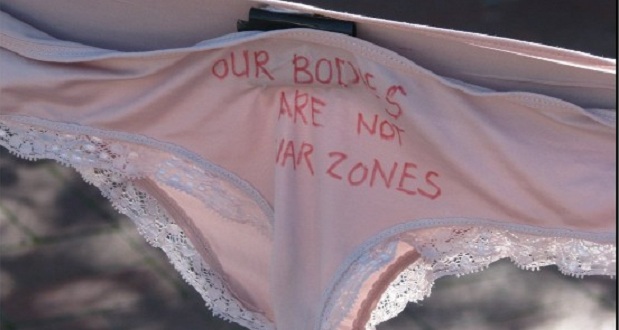 Trigger warning: This article contains an account of rape

A womanâ€™s body should be a sacred space but we live in a society that continually disregards it. 16 Days of Activism are not enough; we need to speak out and destroy the silence surrounding rape. We need to remove the sense of shame and stigma that surrounds rape. The Daily Vox spoke to a rape survivor about her experience of rape and why it is important to speak out.

It happened on the 30th of October 2013. I was doing my first year at the University of North West, Mafikeng Campus. Me and my friend were walking back from campus. As I was coming back from her place to my place, I met these two guys on the road. It was around 7ish, it was not even that dark. While we were walking they greeted me.

I was five minutes away from my place. When we were walking, a third guy came from behind. I canâ€™t tell you where he came from. He greeted me as well. Within two seconds, I had a huge knife on my neck. He said, â€œIf you scream, Iâ€™m going to stab you.â€ A lot of things are going through my mind. I donâ€™t know what to do. I canâ€™t even scream. I canâ€™t even say anything.

They pushed me into a passage near some flats. It looked like people didnâ€™t really use that passage. Everything was dark. There were three guys, this other one pulled my leg so that I fell on my butt. This other one immediately took off my pants, I was wearing jean capri shorts. The first one who raped me was the one with the knife; the other two were keeping guard. As it was happening, there was a car driving directly towards us. So I kept waving, hoping that the driver would see me but they didnâ€™t see me. I couldnâ€™t scream because I was scared I would get stabbed. After he [the guy with the knife] was done the other two guys took turns.

After that, the two other guys wanted to leave and I started begging them and crying, â€œPlease donâ€™t leave me with this guy because heâ€™s going to stab me.â€ The two guys walked away, saying â€œI promise, heâ€™s not going to do anything to you.â€ I was panicking, I was shaking, I was crying, I just realised what had happened. As I was sitting there, the guy with the knife took another turn [raping me]. They didnâ€™t even use condoms, all of them. He finished and started running. I couldnâ€™t stand up immediately to check which direction he went. I put on my pants and went straight into the road where I met some guys that I know. I was crying, I was traumatised, I told them what happened. They stopped some other guyâ€™s car on the road and he took us to the police station.

When I went there, they asked for my name and my surname but they kept calling me Case *123. The person on my case asked me questions, at least she was a woman, but while she was doing that people kept coming in and out [of the room]. There was no privacy. People kept coming in and asking, â€œOh! This is Case 123?â€ Rape itself is very embarrassing so people coming in and out, reading the things that you said, but still calling you Case 123 is very heartbreaking.

After that, they immediately took me to the hospital where I got some counselling. They took some tests, I bathed and all of those things. I had to go back [home] because the next day, I was writing. On that day, they gave me ARVs [antiretrovirals]. I woke up very sick. I was vomiting throughout my exams. I didnâ€™t even finish my exams.

Immediately after my first exam, some investigators picked me up. We went to the scene. I never heard from them until 2014. They told me that the case had been dropped; there are no leads. The last thing they told me was that if I see those guys, I must tell them. How the hell am I supposed to see those guys? Originally, Iâ€™m from Klerksdorp, I study in Mafikeng. I donâ€™t know those guys, I never saw them. Thatâ€™s the last I heard of the case.

I feel that police are not doing enough. People from my campus are not doing enough for students. Residences donâ€™t fit all of us so we have to find accommodation in Mafikeng and itâ€™s very dangerous but then they donâ€™t take rape cases off campus seriously.

The following year after the rape, I started failing. I couldnâ€™t cope. There was that emotional thing that I cannot explain. Everything just changes around you. I always wanted to be home. I didnâ€™t even mind missing my exams, I didnâ€™t care anymore. So voicing this might really help people who might go through this, even at my campus.

I believe that it [my story] will help other to be able to freely voice out what happened to them because bottling everything up really eats you. After everything, I came home, I couldnâ€™t even face my mother or my sister to tell them the reason why I am not going to be able to write my exams. I went through all of that alone. I was even scared to tell other people because it was embarrassing. Some people that I told were like, â€œWhere were you going at night?â€ I was not partying, I was walking home. Even if I was, I was minding my own business.

After that [the rape], I had an extra year [of study]. In 2014 I was going through all the emotional trauma and I failed. After that I couldnâ€™t get a bursary to study for 2015. So it affected everything: my relationship around people, my studies, my bursary, all of that. Iâ€™m praying and hoping next year I can go back.

Editor’s note: the police case number has been changed to protect the survivor’s identity