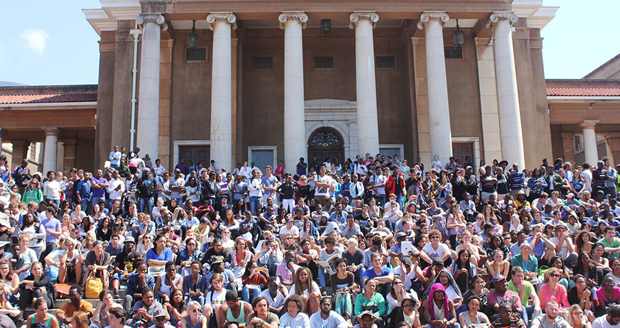 Political parties have rushed to weigh in on the question of what to do with UCTâ€™s statue of colonialist Cecil John Rhodes. The reaction has been annoyingly predictable. The EFF supported radical action against colonial oppressors; the ANC said the EFF was being opportunistic, but made sure everyone knew that it too supported the students; and the DA said we should slow down, remember Madiba and value everyoneâ€™s humanity because colonialists are people too. (Kidding. We added that last bit.)

The EFF appear to have been the first political party to weigh in on the issue, with a statement released on Tuesday, saying that it was fully behind the protests.

â€œDespite the many fake accolades Rhodes has been given, he remains a Murderer who championed the colonisation of Africa and racial segregation in a system which forced indigenous Africans to hard, low-paying jobs in order to buttress the emerging capitalist system,â€ it said in a statement.

The party called on all South Africans living â€œunder shadows of colonial oppressionâ€ to destroy â€œsymbols of white supremacy and as statues erected to celebrate racists and racism [sic]â€.

The EFF raised the matter in Parliament on Tuesday but its motion was swiftly shot down by the ruling party.

Later, the ANC defended its objection to the motion, saying the processes the EFF had tried to use had not followed procedure.

The ruling party slammed the EFFâ€™s ad hoc call for in Parliament for support of the movement â€œconvolutedâ€ and â€œpolitically opportunistâ€, but went on to voice its solidarity with the protestors.

In a statement released on Thursday, ANC chief whip Moloto Mothapo expressed support for the campaign and efforts to transform the institution, saying: â€œWe align ourselves, as the Majority Party in Parliament, with the bold call by the students for the immediate removal of the statue of Cecil John Rhodes. Rhodesâ€™s name is synonymous with the darkest era of our countryâ€™s history, in which Black people were subjected to a murderous, unjust, inhumane, criminal and oppressive system on the basis of the colour of their skin.â€

Mothapo added that the party would table a proper parliamentary motion on this matter â€œat an appropriate timeâ€.

The DA, meanwhile,Â took a different tack, invoking the spirit of Nelson Mandela and calling for â€œan inclusive visionâ€. The party suggested that the university rededicate the statue and create new monuments to â€œactively make the greatest university in Africa a home for allâ€.

â€œMandela did not support the tearing down of monuments. They must remain to remind us of when history takes a wrong turn, as we, as fallible human beings, will make wrong turns too.

â€œWhy not build a statue of another figure that engages Rhodes in perpetual conversation? This would symbolise the dialogue and reflection that must happen in each generation, not in the absence of the past, but precisely because of it,â€ it said in a newsletter published on Thursday.

WeÂ donâ€™t know about you but all we heard was â€œBlah, blah, students are important, blah blah, remember us when you vote.â€

Do you think the views of these political parties will have any standing when it comes to decisions about what to do with the statue? Tell us in the comments section.