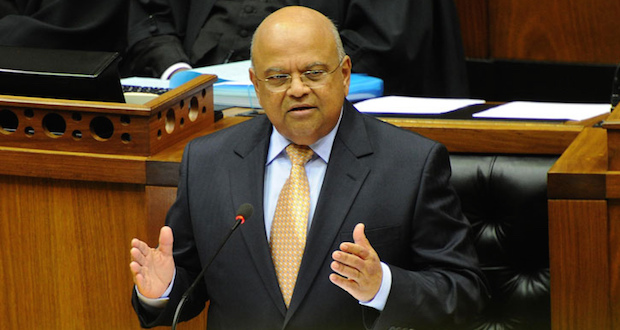 Public enterprises minister Pravin Gordhan is a man whose name is rarely out of the news these days. There’s his trouble with the Public Protector (PP) for decisions made as commissioner of the South African Revenue Services (SARS). And then having his academic credentials questioned by the Economic Freedom Fighters (EFF), Gordhan’s been having an interesting time. The Daily Vox takes a further look at what’s happening with Gordhan.

On July 8, the University of KwaZulu Natal (UKZN) confirmed that the public enterprises’ minister graduated from the institution in 1973. Additionally, the statement went to say that he received an honorary doctorate in 2003 and a Convocation award in 2013.

Gordhan’s qualifications have been questioned by many people, especially those sceptical of politicians’ academics claims. There was a resurgence of questions about his qualifications with the revelations that former SARS deputy commissioner Ivan Pillay only had a matric certificate. This is likely what prompted UKZN to release the statement. The strongest voice questioning the Gordhan’s credentials is the second biggest opposition party, the EFF.

There is not a single EFF press conference where leader Julius Malema does not fail to mention Gordhan. During his latest press conference, Malema questioned why the president treats Gordhan “as a god”.

Regardless of the actual content of the press conference, Malema always brings up Gordhan in some context of the other. The origins of this antagonistic relationship between Malema and Gordhan is not something new. It can be traced back to many years ago when Malema was expelled from the ruling party’s Youth League and Gordhan was part of Sars.

Gordhan served as the Sars Commissioner from 1999 to 2009. That’s also why he’s in trouble with the Public Protector (PP) at the moment. (More on that below). It was during that 2007 Malema first encountered the tax-man when he was given a R16 million tax bill. Malema has maintained that he has paid his tax bill. He also faced charges of money laundering and fraud at the time related to his Ratang Family Trust and controversial deals with the Limpopo government.

Malema has a questionably close relationship with confessed smuggler and tax dodger Adriano Mazzotti, who’s had his own problems with SARS.

It was in 2016 that questions were first raised about a so-called “rogue unit” within SARS. This unit is alleged to have engaged in illegal intelligence-gathering operations against certain individuals.

Just before the 2016 Budget Speech questions were sent from the Hawks to Gordhan around the rogue unit at Sars. Gordhan maintained that all actions taken while he was the commissioner was above board and had met with ministerial approval.

Gordhan at the time said: “Once again, the Hawks and those who instruct them, have no regard for the economic and social welfare of millions.”

In a separate case from the rogue unit Gordhan was also accused of fraud with regards to former Sars senior official Ivan Pillay. Gordhan was accused of granting Pillay a full early retirement with full benefits and then hiring him back as a consultant.

The EFF said the PP’s report confirmed the party’s view that Gordhan illegally engaged in espionage through a rogue unit within Sars.

The PP Busisiwe Mkhebwane released her report on July 6 that “the setting up of the unit‚ approved by Gordhan‚ was in violation of the constitution.” She found that only the president has the power to form such a unit. She has ordered Ramaphosa to take disciplinary action against Gordhan within 30 days for violating Section 209 of the Constitution.

The PP said Pillay, then deputy SARS commissioner established the unit without the involvement of the National Intelligence Agency. Pillay reported to Gordhan directly.

Constitutional law expert Pierre de Vos has questioned the PP’s rationale in finding that the unit was an “intelligence service” constituted outside the proper authority, as per the constitutional and legal requirement.

The alleged rogue unit story first emerged in 2014 and has “been at the heart of an intense factional battle against Gordhan within the ANC.” After the initial story was published by the Sunday Times, the paper then apologised and withdrew the story. Later, however, it was revealed in an internal report by former president Jacob Zuma’s lawyer, advocate Muzi Sikhakhane a judicial inquiry into the matter was recommended.

The Nugent commission of inquiry in SARS found the establishment of the unit was lawful. Judge Robert Nugent, the inquiry’s chair did acknowledge certain individuals in the unity may have conducted themselves unlawfully.

Speaking to The Daily Vox, political analyst Ralph Mathekga said “It is difficult to see the EFF’s position on Gordhan separate from the personal tax issues involving Malema. Malema would have to be superhuman not to be influenced by that personal encounter whenever an issue of Pravin comes out.”

Mathekga adds that the “idea that Gordhan is influenced by special interest is a political statement difficult to prove.” He says that “No one can prove those, and they should remain at the political level where they are.”