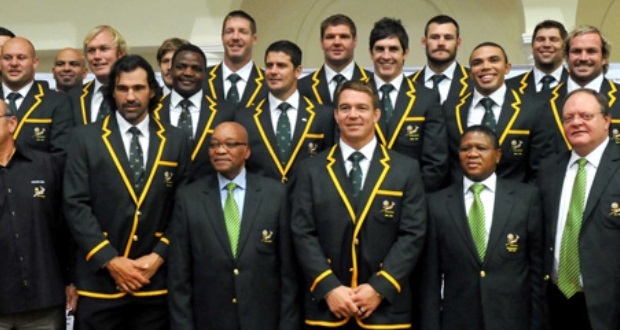 Stephen Grootes assures us in todayâ€™s edition of The Daily MaverickÂ that he is indeed proud to be South African, and we have the Springboks to thank for that. But it’s not that easy if you’re not white. AZAD ESSA tells usÂ why.

In what can only be described as an episode of privileged nostalgia, Grootes relates the tale of how the Springboks’ 1995 World Cup victory assured him of his place in a fledgling South Africa. Grootes’ piece reads like intellectual debauchery: his assumption that anyone cares about “how” a privileged white South African male became comfy in a country burning with an ambition for real change, isÂ simply, telling.Â Here are five embarrassing passages from Grootes’ piece.

1. “Once, on a family trip to the UK, I was overheard explaining to the teenage son of our hosts, how crap South Africa was, how it was just shit. I was rebuked, more for the message than the word choice.”

Weâ€™re not sure what exactly was shit for you, but weâ€™ll take your word for it. At the time, blacks were living in Bantustans, their movements regulated by a dompas.Â It might evenÂ have been during the time a state of emergency had been declared. It really was shit. We appreciate you standing up for us, in the UK, on holiday. You may declare these struggle credentials on a tender application.

2. “It seemed as if all of the people I knew (and yes, they were almost all white, this was still a segregated society) were excited, there was passion and discussion, and talk of tactics, and of how Naas Botha would really show them he was still the best kicker in the world, how Uli Schmidt was the best hooker (and he’s a medical doctor too, you know!), and of a man I’d never heard of called Danie Gerber (who I think I mixed up with Craven once).”

Aah yes, Dr Schmidt, he of, â€œBlacks must stick to football because they are no good for rugbyâ€, cited by no less than the apartheid Parliament of 1988.

But anyway, thanks for reminding us that in 1992Â racial segregation was still a thing. Today, every white has black friends, every black has white friends. And now the power has clearly shifted. White people liveÂ in townships and black people live in suburbs and Indians take off from Waterkloof. The country is truly a free for all.

4. “But Nelson Mandela came out and said it was okay, he was the person who said these young men represented the entire nation. That made all the difference.”

Many of us were caught up in the pleasantriesÂ of the 1995 World Cup victory. We soaked it up and enjoyed the momentary distraction. It might have ‘changed’ your life but for the rest of us? Well, we sort-of looked at Mandela in his green jersey, smiled a beatific smile andÂ then we wanted to know when we’d get our land back. And we still want to know.

5. “It was a moment that said so much, meant so much, it meant it was okay to be a white South African.”

Azad Essa is the exec editor at The Daily Vox. Tweet him @azadessa