Home Fees Must Fall When we prioritise books over people, we only create new symbols of...
WhatsApp
Facebook
Twitter
Email
Print 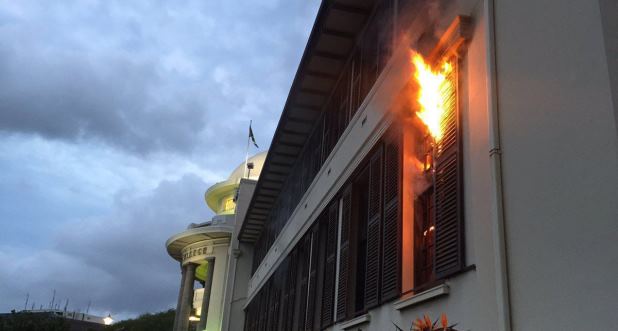 A library went up in flames, and itâ€™s all some of us can think about. For thoseÂ who attended UKZN, like myself, it’s personal. These are our libraries. Itâ€™s where we learned to read and write in the language of privilege, to argue and fight. It was our respite during exams, our hideaway from the clamour outside.

It is only natural to be stirred violently by the developments at UKZN. To be sick to the gut, to be upset, to feel claustrophobic and to cough in the smoke.

Asking why this is happening is a start.

But asking “Why are students resorting to such heinous acts?” is too easy.

Because usually the answer is easy too.

Look for instance at how Prof Jonathan Jensen describes it: “This is what tinpot dictators and the Taliban do.”

I am not part of the Jonathan Jansen haters club but why such ignorance from someone who has reportedly benefited from these very books? The Taliban? Tinpot dictators? Really? But since heâ€™s asked, can the professor also comment on how violent reactions to systemic racism and privatisation of education espoused by so many so-called democracies are better than the tinpot democracies, or the Taliban? Do they both not mock education in one form or another? Or is theÂ destruction through the lexicon of prose what distinguishesÂ civilisation fromÂ destruction through matchsticks ?

Why are libraries at the top of the agenda when there are real people being abused by security, police and university management?

Letâ€™s be clear here, the student protest at UKZN didn’t start yesterday. Students have been protesting at UKZN since mid-August.

The students want their right to education to be secured without the impediments of fee increases, with adequate and safe housing, and to be involved in decision-making processes at the university.

Nothing has been resolved. In fact, their concerns have barely even been acknowledged. Why are we surprised that we are now here, at this impasse?

Besides updating the public about opening and closing the academic calendar, the number of arrests and “millions of rands in damage”, UKZN management has been silent on the wave of discontent gripping its campuses. By failing to engage with students and to provide a space for students to air their dissent, they are complicit in the burning of these centres.

During the height of tensions of the #FeesMustFall protests last year, and despite criticisms from various quarters, the vice chancellors of Wits and the University of Cape Town at least attempted to meet with students and hear their qualms. UKZN vice chancellor Albert Van Jaarsveld has been noticeably absent from the scene.

Are we so immersed in this terror narrative, like Jansen, that we don’t see how systems of oppression create monsters?

I am not going to throw in a perfunctory disclaimer to lament the burning of the Howard College library, or any other centre of learning or destruction to public property, because, really, who wants a library to burn?

Libraries are the stories of our past and future. But what are they in the face of an abusive present? If libraries are sacred ground, the sustainer of that which is good and powerful, then why do they burn so easily? Is knowledge not meant to be a living, breathing thing, created to make the world a better place and not ensconced in ivory towers?

When we revere libraries more than we do people, we only create new symbols of oppression.