Home Bollywood Priyanka Chopra reminds us to #StayWoke, and six other things from the...
WhatsApp
Facebook
Twitter
Email
Print 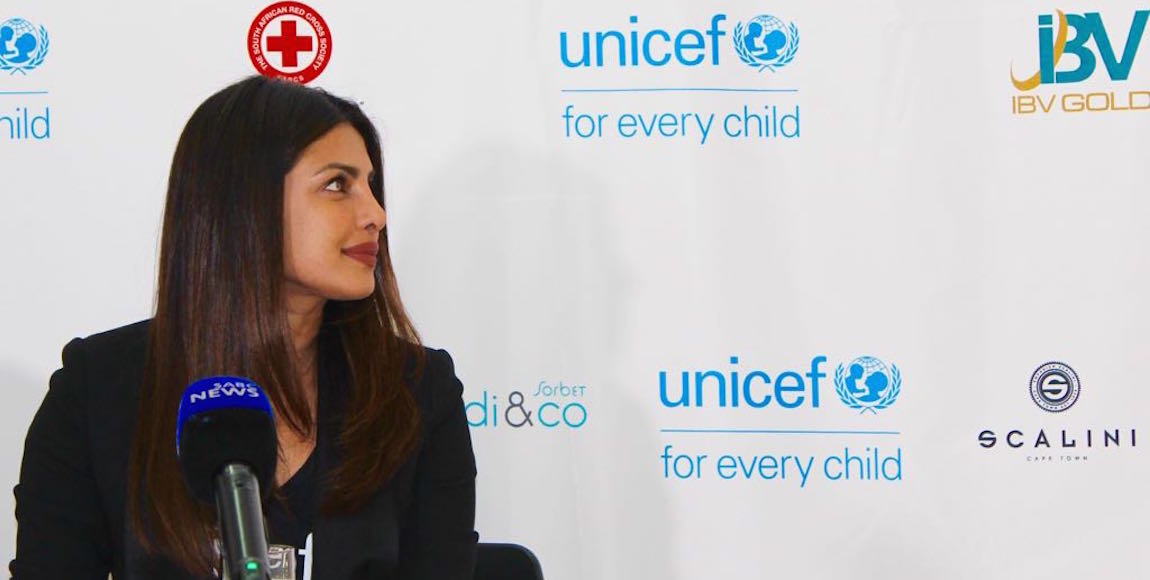 Indiaâ€™s most famous export, Priyanka Chopra was in South Africa and Zimbabwe last week to spend time with child survivors of sexual violence. Chopra spoke about her work as a Unicef Goodwill Ambassador at a press conference in Johannesburg on Sunday afternoon. The Daily Vox is skeptical of â€˜humanitainmentâ€™ (the way celebrity humanitarianism is used as entertainment), but itâ€™s hard not to stan Priyanka Chopra because clearly she is perfection personified. Hereâ€™s our pick of the best takeaways from the conference.

At a press conference where @priyankachopra is speaking. #UNICEFZA pic.twitter.com/NeC6WmIdGk

1. Both celebrities and the media have a role to play in highlighting the plight of the oppressed

Chopra is under no illusions of the power she holds as an celebrity. She said celebrities who do philanthropic work are a means to an end – to highlight worthy causes. Chopra said even though her tripping on the dress she wore to the Met Gala would get more clicks than the work she does in third world countries, this is the type of society we live in.

Chopra said the media plays an important role reporting on the work celebrities do in the interest of bringing social ills to public attention. â€œYou put what we do on the map,â€ she said. She urged the media to use her fame to champion the cause she is fighting for. â€œTake my words to the consumers,â€ she said.

2. Chopra is a raging feminist

The Daily Vox asked Chopra if she identifies as a feminist. â€œI am an extremely proud feminist,â€ she said.

I think feminism has got a bad name, because people think feminism is berating men, hating men, or standing up and saying women are better, that’s not what it is. The definition of feminism, according to me, means that as women, give us the opportunity to make our own decisions without judging us, the same freedom that men have had and enjoyed for centuries. That’s all it means. Let us take our own decisions, and pat us on the back for it. Feminism needs men. It needs men to support females and say we are proud of the women in our lives and the women around us who are an equal part of making the world a better place. – Priyanka Chopra

3. We all need to check our privilege

Chopra said we need to use our privilege for good. She said that as a society, we have a social responsibility to the vulnerable and that it is imperative for us to give back, whether itâ€™s in money or time or compassion.

â€œConsciousness and awareness, that’s what will change the world,â€ she said.

4. Chopra was raised in a home that taught her to be socially conscious – especially of oppression against women – and she has a charity for women

Chopra painted a picture of her childhood in India where she was raised by parents who were doctors. She spoke of visiting villages with her parents as an eight-year-old, when they travelled to treat women patients.

Chopra has her own self-funded charity in India called The Priyanka Chopra Foundation for Health and EducationÂ which funds education and medical procedures for girls and women who are unable to afford it.

5. Chopra draws inspiration from both Madiba and Mahatma

Chopra said that India and South Africa are linked by the work that Nelson Mandela and Mohandas Gandhi did during apartheid. Both stood up for the rights of children and she is inspired by that. Chopra said that through these two men, we have access to examples of greatness and can try to follow in their footsteps.

(Fun fact: Chopraâ€™s birthday is on the same day as Madibaâ€™s.)

6. We need to create safe spaces for victims of sexual assault

Chopra acknowledged that sexual violence – especially perpetrated against women and children – is steeped in stigma and plagued by victim blaming.

Chopra said we need to remove the stigma that isolates victims of sexual assault, and leads them to believe their lives are not worth living. She said society needs to provide them with psychosocial support in the form of counselling.

7. Cinema does not necessarily have to serve as a platform for social responsibility

You can watch the full feed of the press conference here.