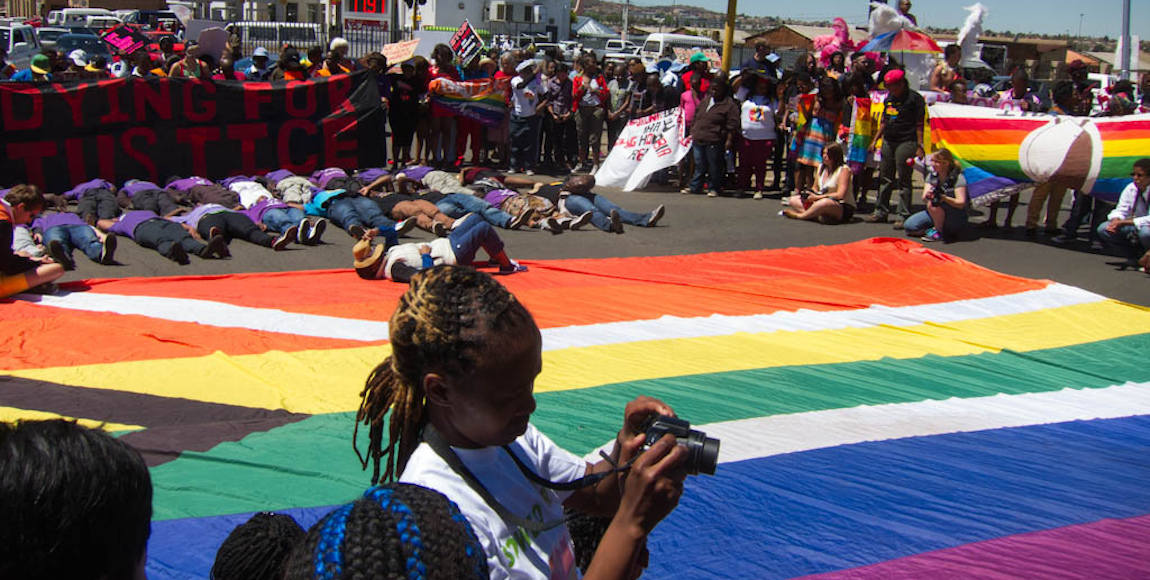 While May 17 marked the International Day against Homophobia, Transphobia and Biphobia, and June is Pride month, queer activists around the country are calling bluff on the so-called “progress” made to protect the human dignity and safety of queer people. JODI WILLIAMS says we need more than change on paper.

A Daily Vox article titled “Our Progressive Constitution is not enough to protect LGBTQIA+ people” finely outlines the disjuncture between protective legislation and the lived reality of queers, stating that despite the major strides made in protecting the LGBTQIA+ community on paper, this susceptible group still remains subject to structural violence, discrimination, sexual violence, and social and economic exclusion. It is this disjuncture that calls into question how South Africa (and its Constitution) continues to be heralded as a progressive beacon of human rights in that it protects vulnerable members of society. In reality, this is far from the truth. In a context where theory and practice are often at conflict, every day we wake up to news of sexual violence and brutal murders, often involving members of the queer community.

In light of this, I aim to unpack the systemic failures of government, institutions and civil society in addressing the sexual violence epidemic in South Africa while attempting to offer solutions that speak to intersectionality and justice.

In South Africa, rape culture has become normalised and deeply entrenched in our societal makeup, with sexual violence rates being comparable to those in conflict-ridden countries. We have inherited and continue to nurture a culture that normalises violence in such a way that we barely bat an eye when vulnerable members of society are subjected to structural, physical and/or sexual violence and stripped of their dignity. It’s even more concerning that the discussion around combating sexual violence often centers on cisgender heterosexual perspectives in a way that is void of intersectionality and ignorant to the compounded understandings of violence experienced by the LGBTQIA+ community (at large).

Queer experiences are often left outside the dominant narratives; compounded as they are with further intersections of race, class, disability and more. For example, race continues to play an instrumental role in the compounded experiences of queers. Matthew Clayton, a researcher at the Triangle Project, maintains that poor Black queers living in informal settlements and marginalised communities experience violence (both physical and systemic) in such a way that makes them more vulnerable than their white counterparts in more affluent areas. These compounded experiences stress that violence, therefore, cannot be seen as a one-time rupture but rather a continuous state of dehumanisation.

While many have referred to the recent incidents of sexual violence as a “rise in sexual violence” or “new-found femicide”, it is imperative to note that these occurrences are not anomalies or new; they are a part of a patriarchal societal make-up that goes far beyond recent incidents. South Africa’s pervasive rape culture is further reinforced and upheld by victim-blamers like that of Minister of Women in the Presidency, Susan Shabangu, who described Karabo Mokoena, a 27-year-old womxn who was allegedly burned to death by her abusive boyfriend, as being “too weak” which is why she “became a victim of abuse”. It is this very attitude, among actors like that of the police and political leaders that shift the blame onto survivors by warning them “to take the necessary precautions to protect themselves.” And it is this very sentiment that then shifts the responsibility away from perpetrators and members of society who are complicit in violence towards those who are most vulnerable.

These everyday injustices leave us asking: what is the significance of protective legislation, several ministries and government institutions like the Department of Women or the Commission for Gender Equality? In their current manifestations they are mere examples of window-dressing.

Studies suggest that around 86% of Black lesbian *womxn in the Western Cape live in fear of sexual assault and that 41% of Black queer South Africans know of people who have been murdered because of their queer identity. Systemic failures, like that of the justice system for one, compounded with a lax response from this country’s leadership has resulted in the near erosion of this so-called “progressive democratic culture” and the institutions that uphold it since the birth of democracy in 1994. These very institutions mean little to queers, womxn and children who live in a perpetual state of fear.

It is the failure of these institutions that has contributed to the rise of social movements aimed at combating pervasive social issues with the underlying notion that justice ought to be taken into the hands of the people that the system continues to fail. Like the vigilante-type groups seeking gender justice in countries like India and Egypt, many activists here at home have grappled with the idea of recourse to combat sexual violence and ensure punitive justice for its perpetrators. Punitive justice and so-called vigilante methods of fighting back seem to be becoming more and more plausible every day – especially to those of us who have lost hope.

The normalisation of violence in South African society is a social ill that requires deliberate, bold and intersectional action on all levels of society. Awareness-raising, preventative measures and punitive justice are but a few ways in which this epidemic can be tackled. The sloppy response by our leaders is one that is rather telling of the political agenda (the protection of power and privilege) that takes centre stage, and the status quo that seemingly aims to be upheld. It is this response (or lack thereof) that is deeply terrifying for the future of this country and more specifically, the future of the most vulnerable members of society.

No longer can we simply quote pieces of “progressive” legislation that speak to these injustices without considering the lived reality that is in stark contrast to them. No longer can we continue to raise and socialise children who are complicit in and perpetrators of violence – be it discriminatory, physical and/or sexual.

Intervention ought to take place at multiple levels of society and across all sectors. There is no easy fix for this epidemic. But our leaders – political, religious and at local level – tasked with fighting social ills and creating a society that speaks to the restoration of human dignity, must wake up to this very responsibility and take action fast. Because as South Africa continues to spiral towards a deeply conflict-ridden society, it is the vulnerable, such as the queer community, for whom we fear the most.

*Womxn: a spelling of “women” that is a more inclusive and aims at shedding light on the prejudice, discrimination, and institutional barriers womxn face. This spelling is often used to show that womxn are not the extension of men but their own free and separate entities.

Jodi Williams is a project officer for communications and advocacy at The Institute for Justice and Reconciliation. The views expressed in this article are the author’s own and do not necessarily reflect The Daily Vox’s editorial policy.