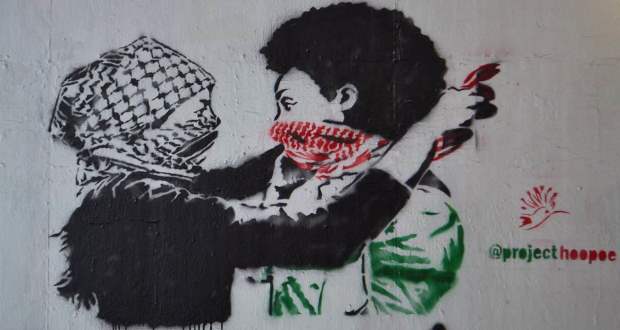 If you’ve taken a walk through the tunnel between East and West Campus at Wits University, you’ve likely seen graffiti by anonymous artistic collective, PROJECT HOOPOE. They spoke to The Daily Vox and explained what they’re all about.Â

We are Project Hoopoe. We are an anonymous artistic collective birthed in August 2015, the anniversary month of massacres such as Hiroshima, Marikana and the 2014 Gaza War. Our aim is to eradicate the excuses of the uninformed on issues that should affect everyone by conveying messages through Afrocentric art and action. We are here to amplify the truth when all the lies are the same. We are here to incite revolution through art. The primary reason of our creation is the extreme apathy and ignorance that pervades the tinder of revolution â€“ the youth. The majority of privileged Wits students seem to be absorbed in the mundanity of their lives, with nary a care greater than which ledge they will occupy at lunch and whether they will dine at Zesty Lemonz or Olives and Plates that day. How can this status quo remain when black students are excluded for simply being too poor to study, when miners have been shot for crying out for a living wage and children are being shredded to smithereens by an apartheid state? There is too little anger amongst the elite and those aspiring to join them about the plight of people.

But we are understanding. We make the excuse for the ignorant of â€œjust not knowingâ€ and we are optimistic that their being uninformed is one simply of circumstance and not intention. That is why the purpose of our art is to be so glaringly obvious and creatively in-your-face that â€œjust not knowingâ€ no longer becomes an excuse to inaction â€“ the paradigm shifts to â€œjust not caring.â€ We are the spark to the tinder. We are unaligned with any political party on or off Wits campus. The themes behind our pieces range from commentary on current events to awareness being raised about deep-rooted historical injustices. All of our pieces are related to some form of Black Consciousness discourse, whether we are advocating for the struggle of workers, commemorating Biko, Lumumba and Sankara or revealing the prevalence of whiteness in our spaces as well as on a global scale. Whilst our primary form of protest is through street art, as an artistic collective we are also delving into other forms of artistic expression. Watch this space. The poignant beauty of street art and graffiti is its impermanence â€“ whereas other forms of art such as paintings and sculptures are created with the intention of lasting eons, the nature of street art is temporary. Itâ€™s the message that it engraves onto the audience that matters. Our Suspended Evolution piece depicting Adam Habib turning away a Wits Student within the chain of evolution in the tunnel was removed within a day. The message of the piece, however, was distributed extremely widely over social media as well as physically on campus. Whilst our art may be here today and gone tomorrow, we are here to stay. All images supplied by Project Hoopoe