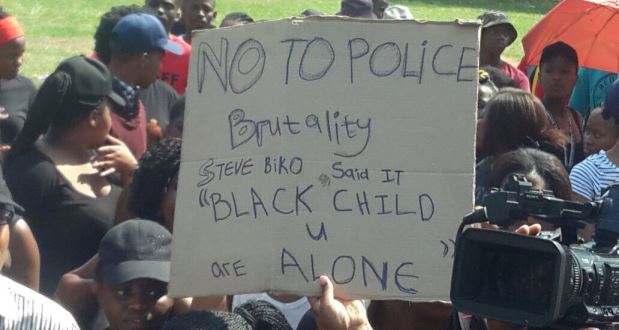 Student protesters have spilled out into the streets, and a number of protesters have also been arrested following protests at the UKZN Pietermaritzburg campus on Thursday morning. Police shot rubber bullets and released teargas on protesting students at the Malherbe residence on campus.

A student from UKZN PMB told The Daily Vox that students are currently disrupting classes and clashing with police on the main campus with the police and MI7 (a private security firm contracted to UKZN).

So far, one injury has been reported.

â€œAn innocent girl who was going to write a test was shot by the police with a bullet. She asked if it was possible for her to be taken to the hospital,â€ the student said.

A Pmb student has been shot with a rubber bullet. #FeesMustFall #Fees2017 #UKZN @IOL @TheMercurySA pic.twitter.com/ptqs4JJsiS

The student was later taken to a hospital by paramedics.

#UKZN – medics treat the injured student. She looks to have a broken arm and a wound #Fees2017 @News24 pic.twitter.com/DKHcTC23WR

Students had blockaded the entrance to the residence with furniture to prevent people from attending class, while several fires were also set around the William O’Brien residences. Students also tried to prevent firefighters from extinguishing fires by throwing stones at them. The residence was then put on lockdown with an exchange between police and students with students throwing stones at people and police firing rubber bullets and teargas at the students. Students also stoned cars that were passing on King Edward Avenue in Pietermaritzburg.

#UKZN we appear to have a liquor cabinet blockade at the Malherbe Res in PMB #FeesMustFall #Fees2017 @News24 pic.twitter.com/forZH5gXVN

Earlier, a reporter for The Witness tweeted that some students left the Malherbe residence with their hands up on their way to write exams.

Some students coming out of Malherbe with hands up. Looks like their going to write exams #UKZN #Fees2017 #FeesMustFall @IOL @TheMercurySA pic.twitter.com/lI2xJrcBmB

Students at most of the UKZN campuses have been protesting since the middle of August over the cost of tuition, safety on campuses and alleged corruption related to NSFAS.

One of the students watching the showdown says police are the problem. #UKZN pic.twitter.com/t1OsPjvJeU

Students have also reportedly been arrested on the streets surrounding the campus. In an email addressed to students, Vice Chancellor Albert Van Jaarsveld suspended academic activity on the PMB campus for Thursday.