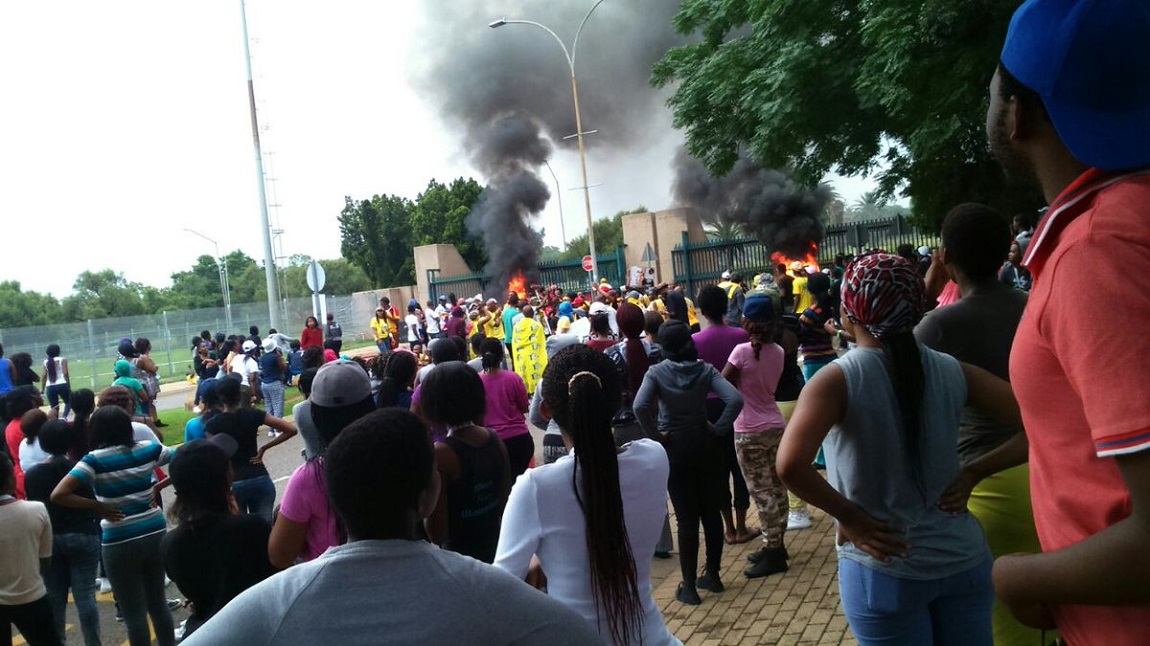 As the 2017 academic year begins, things haven’t exactly gone smoothly. Protests broke out at Walter Sisulu University last week, and that at the Tshwane University of Technology this week. The Daily Vox rounds up what’s been going on in Pretoria and Mthatha.

Academic activity at TUTwas set to resume academic activities on Thursday after a shutdown had been instituted earlier in the week at the Pretoria campus, following a series of fires. The fires were reportedly set in reaction to students having issues with securing accommodation.

However, the latest reports coming out of the Pretoria campus is that classes have been suspended as a result of earlier disruptions.

Protests broke out on Tuesday night and continued into Wednesday, when students barricaded the main campus with burning tyres. The students were protesting against the problems with accommodation, and are also calling for an investigation into the departments that are responsible for student residences and catering services.

Scenes outside #TUT main campus gates. The institution has been closed for the day due to protests. pic.twitter.com/502qjySOq0

#TUT students are protesting over accommodation and what they call substandard facilities. They say they don’t want class disruptions.

Students also handed over a memorandum of demands to management.

Students are handing over a memorandum of demands to #TUT VC. pic.twitter.com/oLTCzGXfWZ

A student at the university who did not wish to be named said Sasco members called all the residences for a meeting on Tuesday night to address the issue about a waiting list for residences, with a lot of students not having accommodation. They also wanted TUT to increase the residence capacity. They were also unhappy that the NSFAS payments for students who couldnâ€™t afford fees would only be made in March.

The student said on Wednesday that the SASCO members came to the residences at about 5am and requested that all the students come outside. They said students threatened to come and fetch students from their rooms personally. SASCO members then began burning dustbins and damaging property. They then moved to main gate where they began throwing stones and pouring dustbins onto the main road of the campus. Students threatened to shut down the main gate and began burning tyres. The SASCO members then said they would give their memorandum to management.

In a statement released by the university on Wednesday, it said that there have been ongoing talks with the transitional TUT Student Representative Council and members of the Soshanguve SRC to resolve issues pertaining to campus facilities, residence accommodation and the availability of financial assistance for students in need.

The statement also said the issue arose because of the availability of funding. In total, TUT annually receives between R420 million to R450 million from various funding bodies, which enables it to provide financial assistance to some 16, 000 students. At present approximately 1, 800 students are in need of financial assistance however, the university will only be able to accommodate 720 of these. In view of this, part of the agreement between management and the student leadership was to approach the Department of Higher Education and Training to source additional funding.

Speaking to EWN, student leader, Nkadimeng Mapheto, says the entire higher education department should be overhauled. â€œWe are calling for the immediate suspicion of that department with regards to financial audits.â€

A meeting is scheduled to take place between management and members of the institutional and local SRCs to discuss issues brought to managementâ€™s attention yesterday. According to the university, disruptions were experienced at the Pretoria and Arcadia campuses this morning and lectures had to be suspended after protesters interrupted classes at these campuses.

Activities at the Pretoria, Arcadia and Arts campuses have also been suspended for 17 February, except for essential services. All activities for students and staff members at these campuses will resume on Monday, 20 February.

#TUTProtest students dispersing after meeting. They have been asked to remain disciplined while negotiations take place @The_New_Age pic.twitter.com/Y3YJD6LaSS

Yonela Tukwayo, spokesperson for the university, said the agreement has been signed. However, the parties have agreed not to disclose the details. She said: â€œRegistration is continuing at two of the campuses that were on strike.â€

Sibongile Mani, a student at WSU told The Daily Vox that registrations has continued at the university as of 14 February after the resolutions were satisfactory. â€œStudents are allowed to register for free and people who donâ€™t meet the requirements and not not affected by NSFAS will be sitting on a special committee.â€

Mani says the Tuesday agreement that was signed will allow students to register for free (initially, students had to pay 20% of their fees upfront), regardless of whether they have debt. A number of NSFAS-funded students had problems registering, so a special committee has also been formed, which has premium funding that will assist them to register. A series of demands that were outlined by the SRC to the university management included these and other issues.