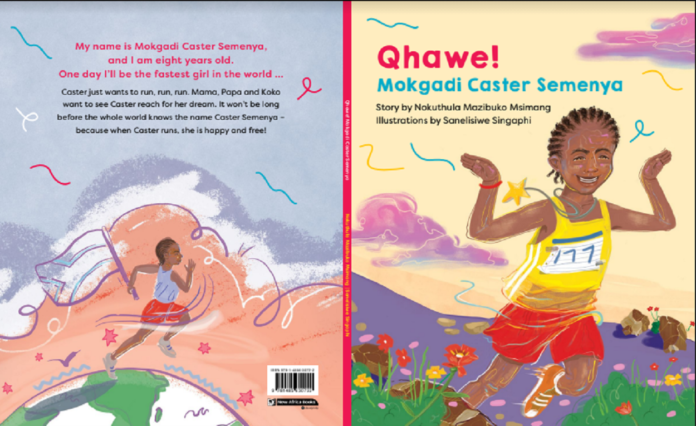 Mokgadi Caster Semenya Is Our Woman Crush Every Day

As the head of the South African Broadcasting Corporation (SABC) Children between 2013-2019, Mazibuko Msimang championed indigenous languages in early childhood development . “Part of our strategy for Children at the SABC was to encourage children to do sport. Sports stars were one of the favourite things to cover. There would often be live crossovers to some of Caster’s races on Hectic 99,” Mazibuko Msimang says.

“It was all aligned for me to write about Caster, after writing children’s books for 25 years,” Mazibuko Msimang tells us.

Becky Motumo, who is a good friend of Mazibuko Msimang, manages Semenya. Motumo shared the idea of a children’s picture book with Semenya who was immediately on board. Semenya was very excited to be able to tell her story.

“It was important for me to capture Caster’s spirit and her world. With each draft I would call her and read it to her. She was over the moon. The little things about her childhood are all in the book – all those experiences she had and lived,” said Mazibuko Msimang

Caster’s life story is a superhero story, Mazibuko Msimang explained. “This is the feel you get immediately from the opening lines of the book. The hero song sets the tone for the extraordinary life Caster Semenya is leading,” she said.

“We all know that Caster is extraordinary. She is poetry in motion and absolutely magical to watch. I have always admired her as a national treasure. Someone who is making us all smile, and she is winning gold. We love all of our sporting heroes,” said Mazibuko Msimang.

Caster, you remind us that we all have a place in this mad world

In the book, we read about Semenya’s training, and where her will to run came from. The anecdotes about her family’s support and her love for sweets are relatable and heartwarming. The references are deeply personal and give us a glimpse into her upbringing. The book is aimed at young readers, but the message transcends age.

“She is not at the Olympics to defend her 800 metre title. They may want to celebrate mediocrity there, and fence out the champions. She is not the only one. You can find rules to keep out the best but we are going to celebrate her. You can’t rewrite history. We know the truth,” Mazibuko Msimang says.

Semenya was not able to defend her 800m gold medal in Tokyo. Track governing body has imposed a testosterone limit on female athletes competing in distances between 400 meters and 1500 meters. Semenya’s testosterone levels reportedly exceed those limits.

“Excellence is too much for some people. Someone like Caster capsizes the narrative that you cannot be a champion and a Black woman at the same time. It disturbs the status quo,” said Mazibuko Msimang.

Dr Mazibuko Msimang is excited to do upcoming live readings on Instagram. The book can be purchased here, and is available in all 11 official South African languages.