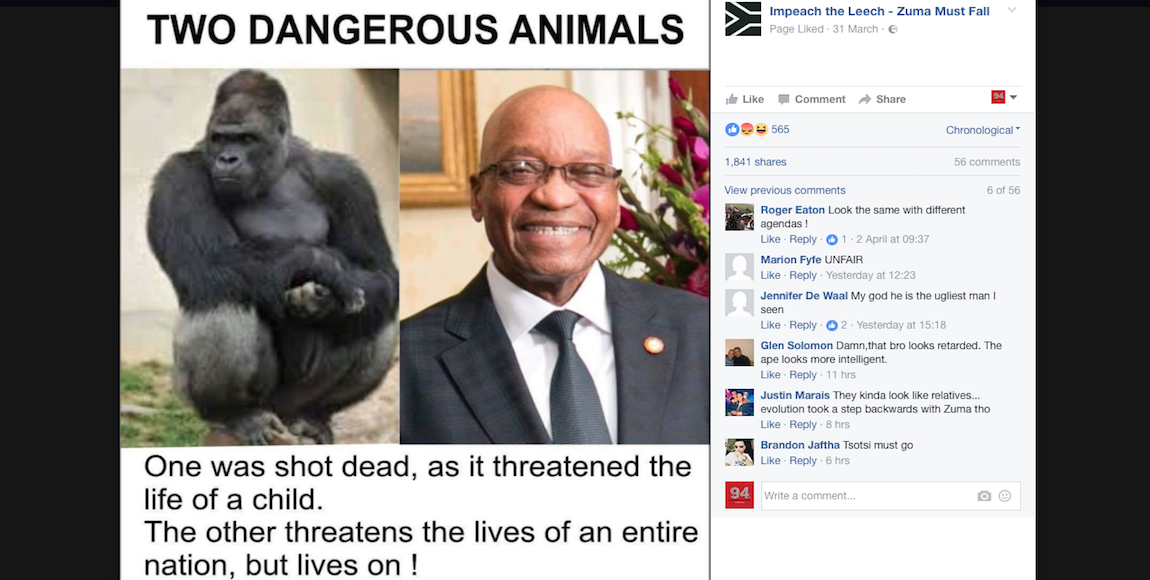 A Facebook page called â€œImpeach the leech – Zuma Must Fallâ€ is calling for South Africans â€œto come together and help us get rid of our corrupt president and his captured friendsâ€. The page has over 49 000 likes and the predominantly white South Africans who follow the page have been venting their frustrations with Zuma in an uninhibited, derogatory and racist manner.

One of the many images posted by the page features President Zuma in traditional Zulu attire and is utilised as a point of ridicule. Allen Schmidt, a commenter, writes, â€œGet back to the bush where you belongâ€. Besides incriminating posts, the page updates its audience with information on upcoming rallies and protests against President Zuma with a distinct partisan leaning. The marches and protests it shares are almost exclusively Democratic Alliance events.Â While the DA boasts a pledge against racism, the party has a track record ofÂ attracting racists. The most recent call to action from the page is to support the DAâ€™s march on Friday 7th April and for a national shutdown which is to take place on the same day.

“[I]f it’s gonna be ‘civil society’ – an acutely raced and classed project, and one that bends, relentlessly, towards constituted power – it’ll be another farce,” he wrote on Facebook.

The astounding number of page likes makes the existence of this online community difficult to ignore – an image comparing President Zuma to a gorilla was shared over 1 800 times. This is indicative of how pervasive racist sentiment is in South Africa.

It also highlights the difficulty in calling for unity in a country that remains socially divided in terms of racial inequality. Many South Africans, particularly the black and working class, refuse to join together with people who, among other things, do not truly see others as equals – and who are otherwise socially apathetic when a crisis does not directly affect their privileged lives.

We must all unite and march when the privileged are now directly affected? ðŸ˜#blackmonday

Many South Africans are asking how they can unite and mobilise against an immediate threat. If there is ever to be any real unity against unilateral actions from the president that do not have the country’s best interests at heart, it should be led by the people who continue to bear the brunt of South Africa’s apathy, and who stand to lose the most – South Africaâ€™s black working class themselves.