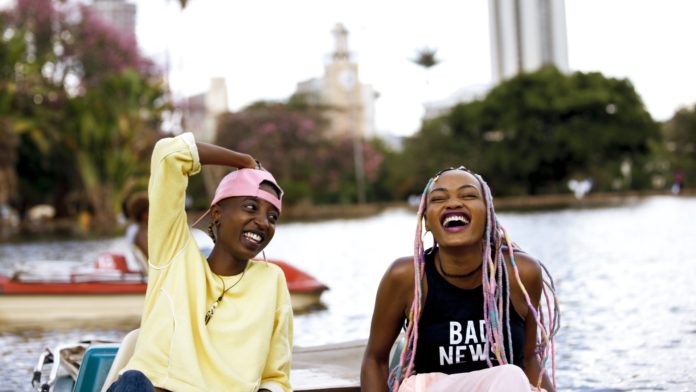 Living in a pandemic has given us the opportunity to travel and explore the world through watching films. Queer people will tell you how they have to choose between safety and happiness daily. These are rare commodities when you are queer. Rafiki is a love story set in Kenya about these very choices. It is a manifesto about true love, and the many ways happiness presents itself.

“Good Kenyan girls become good Kenyan wives,” but Kena (Samantha Mugatsia) and Ziki (Sheila Munyiva) yearn for more. They fall in love and it sets off a rollercoaster of events that test the limits that society places on queer love. This love story between two teenage girls is based in Kenya, where gay sex is against the law. It was banned from being screened in Kenya, while also becoming the first Kenyan film to be screened at the Cannes film festival. It was directed by Wanuri Kahiu and released in September 2018. While it courted so much unnecessary drama, the film itself was light and happy, save for the few very realistic portrayals of homophobia toward the end.

Africa Day: 6 African Women Who Are Shaking Things Up

Being Lesbian In Nigeria: ‘Under The Rainbow’ Doccie Tells The Human Story

Kena and Ziki have a star-crossed lovers theme about them. Their fathers are both running for local political office. Kena’s father has remarried someone younger and is expecting a baby boy with his new wife. Kena’s mother is a staunch Christian who is often seen quoting Bible scripture, and attending church. Ziki  is fun and always dancing in the street with her two friends. They have a love at first sight moment early on. The courtship between the two girls is so romantic that they make you feel part of their love and wonderment with each other. The relationship is such a paradox to the strained relationships that surround them. The love between Kena and Ziki is easy and organic.

The disconnect between parents and children is another theme which is explored. There is a telling scene where Kena’s mom laments “all we need now is a nice rich doctor, then all my prayers will be answered” – after seeing Kena in a dress. In the meantime Ziki has convinced Kena to apply to medical school which she gets into. I will advise on a trigger warning when the community finds out about the two lovers. It is violent and no person deserves violence. But these are the realities queer people face. Ziki and Kena part ways after this, but their love remains strong.

The movie was named Outstanding Film – Limited Release at the 2020 GLAAD Media Awards. These awards recognise and honour media for their fair, accurate and inclusive representations of the LGBTQ community and the issues that affect their lives. Rafiki beat out the likes of Pedro Almodóvar’s Pain and Glory and Portrait of A Lady On Fire.

I have viewed the other nominees, they are excellent- but they hold no candle to Rafiki. The movieis much more relatable because it is representative of Black Queer love and joy; something lacking in mainstream cinema. The word rafiki is Swahili for a friend. Ziki and Kena embody platonic and romantic queer love. It is in all those private moments they share that affirm how pure their love is for each other.

One day, we can hope for a bigot free world. One where a queer person isn’t immediately being sexualised by a cisgendered homophobic society. A kind of society that holds a safe space to be queer and love in peace. Kena and Ziki’s love story is profound because it is rooted in such purity and love. Everyone around them are just chaotic messes who have no idea what real love means. Rafiki gives us hope in a world that is safe, and where personal love is the stepping stone to a world that affirms queer love and not just tolerates it.

Rafiki is streaming on Showmax now