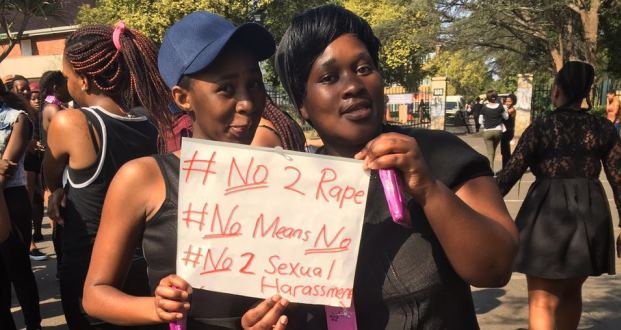 How did this all begin?

On Monday the 5th of September, a UKZN student reported that she was raped by an officer of the South African Police Services. She told Pumelela Nqelenga, a drama lecturer at UKZNâ€™s Pietermaritzburg Campus, while waiting for an ambulance outside the Risk Management Services (RMS) offices. Nqelenga said the student was sexually assaulted when officials forcefully removed her from the residence before being raped at a later stage.

News spread on social media that a student was raped by a SAPS officer while he was on duty â€œto maintain public order and stabilityâ€.

How did the university respond?

University management released a statement on Tuesday which only acknowledged an incident of sexual assault.

â€œA student on the Pietermaritzburg campus has reported a case of sexual assault by a SAPS officer. The alleged incident is reported to have happened off campus. The incident is under investigation,â€ said UKZN spokesperson, Lesiba Seshoka.

The reports of the alleged rape incident were subsequently rejected by Seshoka on Wednesday when he spoke to the media. â€œThat is totally not true, we know for a fact,â€ he told eNCA.

And what about the rest of the student community?

The students ignored Seshokaâ€™s comments and stood in support of the victim. They marched to the Alexandra Road police station to demand answers on how the officials were going to address the issue. â€œWe want the officials of Alexandra police station to report to us as to how they are going to be moving forward with the fact that one of their officers is a rapist,â€ said Siphelele Nguse, SRC President of the Pietermaritzburg campus .

Then, what did the university say?

In a press statement on Friday morning, Seshoka insisted the public was misinformed by media houses and on social media. He said there were no reports of rape on campus at UKZN.

â€œThe university condemns all types of violence against women,â€ he said, before rebuking students for making â€œdefamatory commentsâ€.

On Friday afternoon, in a press briefing, Seshoka told the media that the victim deviated from her original story and that the university is uncertain whether there was an actual rape.

“The university cannot say that the student was raped because no case of such nature was opened and the student has changed her story. Now they are saying there was no penetration but it was a sexual assault so it is hard at this point to give enough information on this matter,” said Seshoka.

So what does the law say here?

Rape is described as the intentional and unlawful sexual penetration of another person without their consent. Sexual assault occurs where there is an unlawful and intentional sexual violation on the victimâ€™s body or when the victim made to believe that he or she will be sexually violated or raped.

Let us be clear, the legal technicalities are simply distinguished by the act of penetration. The intention to violate another person sexually is common in both rape and sexual assault cases. It is not for the management of UKZN to deem which sexual offence is less â€œdefamatoryâ€ than the other.

While the law might say one thing on penetrative rape, academia reasons in the alternative. Professor Pumla Dineo Gqola, the author of Rape: A South African Nightmare, says rape is actually the performance of violence on a person’s body without their consent that isn’t necessarily penetrative.

â€œRape is not about sex but a language of violent masculinity. The legal definition is quite problematic because it serves a certain system that doesn’t always work in favour of rape survivors.They are forced to prove their lived trauma while being made to feel ashamed of it,â€ she said.

Surely, the university has processes in place to deal with sexual violence?

Earlier this year, UKZN students overheard a senior official of RMS at Pietermaritzburg campus say that a woman who behaves outside a certain norm must be physically abused.

â€œIf a woman wants to act like a man then she must get a hiding like one,â€ the official Â told students.

Gqola points out that the culture that surrounds rape normalises comments made about access to peopleâ€™s bodies, which can create an expectancy to be raped. At the end of the day, a woman was violated again at a South African institution of higher learning while the university insists on playing a game of semantics with the media.

Three UKZN academicsÂ put it frankly when they said that not taking decisive action â€œentrenches rape culture and dismisses the gravity of the incident and the lasting impact of sexual violence on women.â€

The real questionÂ is whether the right facilities are available to rape survivors and victims of sexual assault on the university campus. A student at UKZN told the Daily Vox that there are no organisations on campus where students can report rape incidents. These are reported to campus security, RMS.

â€œThere is a hotline number but all the lines lead you to that one RMS building. There is no quick response to incidents when bad things happen at UKZN. The RMS officers are apathetic when it comes to womenâ€™s rights and violence against women,â€ she said.

The brutality we have seen from the police and the way this â€œsexual assaultâ€ case has been handled is testament to the mess at UKZN. What liability do the police have when engaging in acts of political repression on university campuses? Can the university protect its students when SAPS officials become offenders themselves?