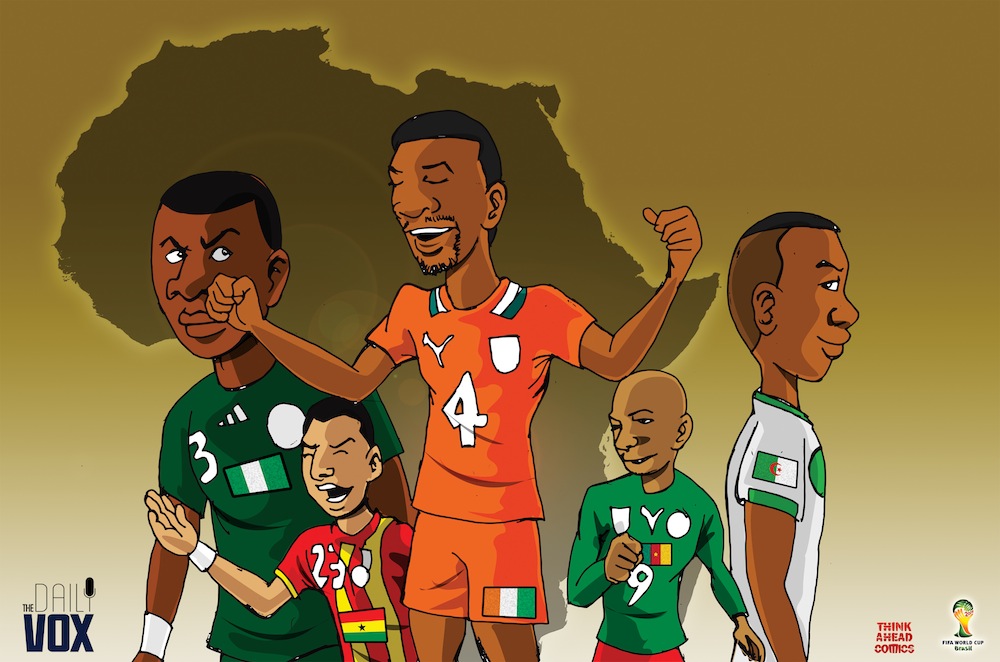 Lacklustre, disappointing, mediocre and yet with the odd moment of wonder and delight… YASSER ALLY sums up the African teams’ opening performances at the end of week one at the FIFA World Cup.

Cameroon lost 1-0 to Mexico in the opening game. They didnâ€™t seem to have a plan A or B. It seems the players were still in two minds over theÂ bonus scandalÂ that preceded the tournament. Money. Money. Money.

Cameroon are in a tough group and this was the game they had to win. Despite their cool kit, this is Cameroon’s fifthÂ straight loss at a World Cup and number six is on the cards when they meet Croatia, a skillful European team out for blood after losing their opening game, thanks in part to some shocking refereeing decisions.

To add injury to insult, captain and alleged chief instigator in the bonus scandal, striker Samuel Etoâ€™o, has been ruled out for the rest of the competition due to a knee injury.

Step up, or step aside, we say.

Like Cameroon, Ghana are in an incredible difficult group which includes Germany and Portugal. And like Cameroon, this meant they had to win their opening game against the USA.

Having beaten the USA in the previous two World Cups, confidence was high, but in a shocking start Ghana conceded a goal after just 29 seconds, the fifth fastest World Cup goal ever. GhanaÂ pushed back and managed to maintain the majority of the possession but only equalised in the 82ndÂ minute. The men in white should have secured a draw but a lapse at the back left substitute John Brookes unmarked. He headed home the winner with four minutes remaining. USA 2, Ghana 1. Could this be the end for the Black Stars?

The Super Eagles played out their first game to a dull 0 â€“ 0 draw with Iran. One would have expected the current African champions to have played with flair and confidence, and, having played in last yearâ€™s Confederations Cup in Brazil, their experience of the conditions should have given them the edge over Iran. But it was not meant to be. Although they managed to retain much of the possession their finishing was not up to par. What should have been an easy three point win became a one point draw, leaving fans frustrated.

Thank the Lord for Cote d’Ivoire! Team managerÂ SabriÂ LamouchiÂ took a huge chance when he decided to keep striker Didier Drogba on the bench. Without Drogba, Ivory Coast were not frightening up front. Though stars such as Gervinho, Wilfred Bony and Yaya Toure were on the park, they simply couldn’t string together a good passage of play and soon found themselves 1-0 down to Japan following a wonder strike from Keisuke Honda.

When Drogba was introduced in the second half, the game changed. The Elephants played with more purpose and equalised within minutes through Wilfred Bony. In a thrilling comeback, Gervinho caught out the Japanese goalkeeper at his near post and the turnaround was complete. 2-0 Ghana.

Don’t be surprised if these giants top their group.

No one gave Algeria much of a chance coming into the competition. They hadnâ€™t scored a World Cup goal in the last five games. Their players are among the cheapest in the Fantasy League competition. Up first was Belgium, a team many are branding the dark horses in the competition.

Algeria werenâ€™t given much hope to start off with but to the astonishment of many, they held off the Belgians for the first half and broke their goal scoring drought after Sofiane Feghouli put away a penalty kick midway through the half.

Could the Fennec Foxes sneak a victory? It was not to be. Belgium made three quick substitutions early in the second half and scored goals in the 70thÂ and 80thÂ minute, leaving Algerians feeling like it had all been a mirage in the desert.

Our verdict
For too long now African fans have just seen it as an achievement to just qualify for the World Cup. But the African teams this year are capable of much better. Many players are based at European clubs and have experience in playing at the highest level.Â We should not settle for mediocrity. No more excuses Africa – make it count.