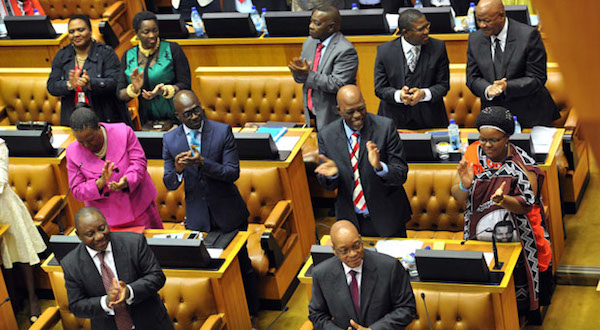 Only the constitution, the rules of Parliament, and someone with the necessary public mandate have the authority to govern MPsâ€™ behaviour. So why was Ray McCauley trying to play peacemaker between the ANC and EFF in parliament? asks EBRAHIM FAKIR.Â

â€œUnless McCauley divines a miracle, this song wonâ€™t end in harmonyâ€ ended a piece by Greg NicholsonÂ on the Daily Maverick.

This was in reference to the public hype about Ray McCauleyâ€™s efforts to broker a peace deal between the ANC and the EFF in Parliament and to stymie the EFFâ€™s anticipated disruption to the State of the Nation Address. This itself happened on the back of efforts by Cyril Ramaphosa late last year, to broker a deal amongst opposition parties, primarily the EFF, to halt further disruptions to Parliament and to broker a deal around disciplinary proceedings against EFF MPs’ disruption of Parliament. That is appropriate. Ramaphosa is an elected leader, deputy president of the governing party, deputy president of the country and leader of government business.

But who is Pastor Ray McCauley? A private citizen with respect to the proceedings of Parliament, notwithstanding his popularity amongst reborn right wingers on both sides of ANC/EFF divide, and he has no business in this symphony.Â Â
Â Â Â Â Â Â Â Â Â Â
I was frankly surprised at the public prominence given to McCauley and the absurdity of his having been invited, or having invited himself, to this â€œroleâ€. Iâ€™m not surprised that this kind of dealmaking did not work. McCauley was not elected. He has no authority and mandate to either negotiate this deal or enforce it. What stops anyone from not sticking to its terms? It is only the constitution and the rules of Parliament and its conventions, or agreements brokered by people with the requisite authority who can regulate the behaviour of MPâ€™s or the proceedings of Parliament.Â McCauley, or any other private citizen for that matter, has no business meddling with two sides of a divide who appear intently contemptuous of Parliament and its rules.
Â
Besides, what grand negotiation is required here? Itâ€™s not as if we are negotiating a grand societal transition from apartheid and oppression to freedom and democracy. We are essentially talking about a 6% party and a 60% party, both collectively a bunch of miscreants who refuse to be answerable to a set of rules that commonly under-gird their behaviour and which the society has consensually accepted as the rules and orders that govern the institution of Parliament.

Yet here, one person (the president) wishes to be insulated from any kind of public probity accompanied by a bunch who wish to insulate him from it, and another who donâ€™t, it appears, recognise any set of rules, other than the ones they wish to make up as they go along. But it is these miscreants who people elected to go to this place and itâ€™s the rules of this place that must determine the force of public probity against the one, and reign in the anarchic enthusiasm of the other.Â
Â
Of course it is a problem that the people involved are contemptuous of Parliament. But it is these disdainful and insolent MPs (and president) who have been elected to Parliament and it is they, who must sort out their business â€“ however well, or badly behaved they are. And they must do this in the constitutionally defined forum meant for the public deliberation, discussion and arbitration of issues. After all, they are the people who derived a public mandate and public authority to do so. That public forum canâ€™t be replaced by private governance. This is not the private realm. It is the realm of public authority â€“ where people who derive a mandate from other people, must formally go about their business. Informal deals about issues of public probity, authority and government canâ€™t be arbitrated informally.Â You can have an informal economy. You cannot have informal government.Â Â Â Â Â Â
Â
To be sure, the meaning of democratic government is contested. This is because democracyâ€™s meaning is both contestable and unstable. Therefore propositions regarding the role and function of democratic public institutions, like Parliament, in the architecture of democratic governance will equally, be contested. But democratic government defines and designs the relationship between those who govern and those who are governed precisely and unambiguously, as it defines the roles, functions and limits of institutions and the rights and responsibilities of the citizens that they relate to.

It is also trite to say that vibrant democracy requires citizens that have rights and the agency to exercise these rights. It is equally trite to suggest that substantive democracies require public institutions with designated powers and functions, bound by a set of rules defining their roles and responsibilities, and the modes through which public institutions exercise their mandates.

A democratic culture, on the other hand is a product of the complex interplay between the (democratic) cultural norms and (openness) values of the society, with the institutional and systemic processes and procedural rules that govern it. Citizens without rights are merely subjects. The exercise of rights without limitation is a recipe for anarchy, and institutions unbounded by rules are a route to the abuse of power.

But the rules that bind institutions have be defined and agreed upon as the constitution and the rules of parliament do. It is these rules – not the whimsical fancies of deals struck in private – that must guide, contain and, where necessary, deal with a breach of the rules when someone does not play by them.
Â
Let the EFF test the limits of what is possible within the rules of Parliament. Let the speaker enforce them. And if the speaker enforces them extraordinarily or outside of her mandate and authority, let the courts decide what is proper and what is improper, not a set of private actors who wish to impose themselves on public institutions. That is, unless we want greater informal government, to add to our growing informal economy.
Â Ebrahim Fakir was Ruth First Fellow for 2014 at the University of the Witwatersrand and is Head of Governance at the Electoral Institute for Sustainable Democracy in Africa.