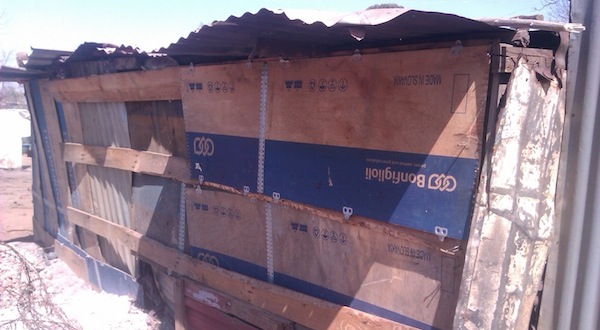 The much debated realignment – or re-blocking – of shacks in the Protea South Informal Settlement is now underway butÂ many residents are still unhappy aboutÂ the exercise. BHEKI SIMELANE spoke to residents about the process.Â Solomon Ntibane, 55, unemployed
I cannot complain much with the process itself because we were promised that when the realigning exercise comes to an end theyâ€™d furnish our shacks with electricity and be in a position to provide us with basic services. My only problem is the way the whole exercise is being carried out. My shack was moved a mere five meters from where it originally was. At the new location I noticed that there was a farrow that would Channel rain water straight into my shack. They told me theyâ€™d clear the area but three months after I was moved nothing has happened. I fear for my grandchildren for rain is imminent and this whole place will be flooded. David Lubisi, 49, electrician
I never even received the two bags of cement, the only assistance they provide besides the reckless guys they hired to build our shacks. I do not understand the logic of moving a shack to a different location but erecting another one on the same spot. It doesnâ€™t make sense to me and points to people who are not really sure what they are doing but who, for some reason, feel it has to go on. The only benefit Iâ€™ve had is electricity, which has been provided to only a few of us at the moment. Anna Tshabalala, 32, unemployed
I really did not have a problem when I heard my shack would finally be moved because I had long wanted for that to happen as I always thought that our shack had not been properly built. It always looked like it would fall on us and our three kids at any time so I was happy that it would be re-erected and probably a lot better. My shack was moved five meters from where it originally was. A few days later I asked my kids to climb up the shack and fill some holes that let in rainwater. The roof caved in but luckily none of the children were seriously injured. This is when I realized that the whole realignment exercise presented problems. Sibongiseni Hlongwane, 33, unemployed
My shack was moved about five meters from where it was. I do not really have a problem with the realignment, Iâ€™m fine with it. We have been promised electricity when the exercise comes to an end. I have never had electricity and am excited at the prospect of experiencing the efficiency of cooking on an electric stove. Iâ€™m really looking forward to the day when my shack will be bright with electric light as opposed to candlelight. Matsidiso Mafere, 55, unemployed
My one room shack where I live with my 19 year old daughter and three year old nieceÂ  was moved a distance of about 15 meters. I was happy to move because I had no space in the old yard but as soon as my shack was [moved], I started to realize the loopholes in this whole exercise. [I] cannot be expected to do the finishing touches on the shack because I do not have extra materials. Another thing that is troubling me is the unavailability of toilets. How are we going to manage without a toilet? Previously I shared with an understanding neighbor. They have not said anything about the provision of toilets.