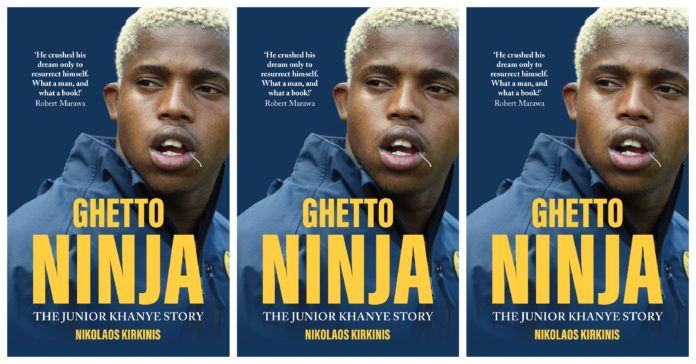 Ghetto Ninja: The Junior Khanye Story is a book which tells of the making of a soccer sensation. Junior shares his experience of poverty, the death of his brother, soccer stardom, alcoholism, the murder of his father, and raising children, with great honesty. Much more than a sports biography, Ghetto Ninja is Junior Khanye’s tragic, yet triumphant story. It is impossible to put down.

Next door, something dark is cooking. Ntombi and her family have watched from the broken window of their shack as the Khanyes gradually replaced their corrugated iron sheets with bricks and concrete. They watched new tiles being fitted to the roof, the driveway being paved, and lights being installed. They watched with a deep sense of bitterness. And now that bitterness has grown into a tree with a poisonous fruit. One of Ntombi’s sons is a boy named Mduduzi. He is in a gang that one hopes to never come across on a quiet street in the middle of the night. They have a thirst for drugs, liquor and violence. In the early hours of 15 June 2011, Mduduzi sits in a circle with three of his friends inside his family mkhukhu. They spend a few hours using various drugs and sipping on several bottles. When the dark hour of 3 am arrives, the four boys stand up from their circle and leave the mkhukhu. They stand on the road outside the Khanye’s house and take their time to survey the street. It is very quiet, and that is just what they are wanting. The four boys enter the Khanye’s house through the empty space where the security roller doors were supposed to have been installed.

Junior and his father sleep in the two rooms next to one another. Both of their bedroom doors are locked. Junior wakes up when he hears the sound of the door next to his room being kicked viciously. He hears his father’s door smash open. Junior springs to his feet but something stops him from going outside. He can faintly hear his father shout something, and then his voice is cut short with a sickening thud. The sound of iron on flesh. Then he hears a deep and painful groan, followed by a heavy thud, like a boulder landing on the floor. The next sound he hears is one that will haunt him for a long time to come. Drip, drip, drip. Just like a tap that has not been closed properly. Drip, drip, drip.

The footsteps leave the room next door, shuffle closer to Junior’s door and then stop outside. Bang! One of the boys sends his boot into Junior’s bedroom door, hoping to kick it open. Miraculously, it stays firm. Bang! The door bulges but it does not open. Then another kick sends splinters flying. Junior needs to think quickly. He does not have enough space to escape, and he does not have the fists to fight. He decides to pretend to be on the phone:

‘Hello, hello?’ He makes his voice deep and loud, ‘Yes officer, they are here, they think there is no one else in the house, come around the back and you will catch them. Yes,

yes. They are here now.’

There is silence on the other side of the door while Junior pretends to be on the phone with the police. And then there is the sound of panicked footsteps. The boys head out towards the front exit of the Khanye house and escape into the street. Inside their house is very dark, but Surgent, using his electrician skills, had recently installed lights around the outside of the house. When Junior hears the footsteps leaving his house, he runs to his window and looks outside. He sees the boys running along the outside of the house and towards the street. By the time Junior gets to the window to look outside he can only get a glimpse of one of the boys. The boy wears a light-green hoodie and cream trousers, and as he runs he turns his face slightly to the side – and Junior recognises him. A few years ago when Junior used to coach a local youth team, this boy was one of his midfielders. He was fifteen years old then and went

by his given name of Amos. However, in that same year, Amos killed his first man and began building a fearsome reputation. He soon became known as Mavio. And now here he is, running from Junior’s house and vanishing into the night.

Junior springs into action and runs out into the street, not even waiting to pull on some clothes. He does not know where he is running to, all he knows is that he is running

for his life. He keeps sprinting until he reaches the house of his friend Mzamo and begins banging on the door. Slowly, grudgingly, an old man opens the door. Mzamo’s father is a well-known member of the ZCC church. He is known as Bab’ Hlabangwane, a caring soul. He looks at the soccer player in shock: ‘Junior? What is going on? Why are you naked, boy?’

The shock in Junior’s body freezes his words, he is unable to fully explain the situation, he does not even fully understand what has happened himself. However, he does

manage to ask to borrow a pair of trousers and a weapon of some kind. Junior’s friend goes back into the house and fetches him a pair of black tracksuit pants and a knobkerrie. He pulls on the pants, grips the weapon and runs back in the direction of his house. When he reaches his house, everything is quiet at the front entrance. When he runs around to the back entrance, the first thing he notices is his television sitting on the road outside. Then he sees two boys, both wearing black hoodies, bending down and trying to lift the television.

‘Hey voetsek!’ he yells, then charges towards the two boys in the hoodies. They immediately release the TV and begin walking away. Not running, just walking. As Junior approaches them he notices how casually they are walking and not running away from him. There is no fear in their steps. Junior lowers his knobkerrie and slows down his steps. Only someone with a gun can walk with such little haste away from danger. Junior stands still and watches the two men slowly make their way towards the main road, cross it and disappear into the maze of houses and mkhukhus on the other side. As Junior watches them disappear, he breathes heavy mist into the cold winter’s evening air. He has a moment to try and wrap his head around the confusing events of this night and realizes that he still has not seen his father since the commotion started. He begins to sob uncontrollably.

Junior walks back to the entrance of his house but he stops just outside. Something deep within him prevents him from going inside. He strains his ears to listen if he can hear any sign of his father moving around the house. He waits to hear that familiar, deep, seasoned voice, calling out his name. But the harder he listens the more he just hears the dripping sound. With shock he begins to realise this is not water that is dripping – it is blood.