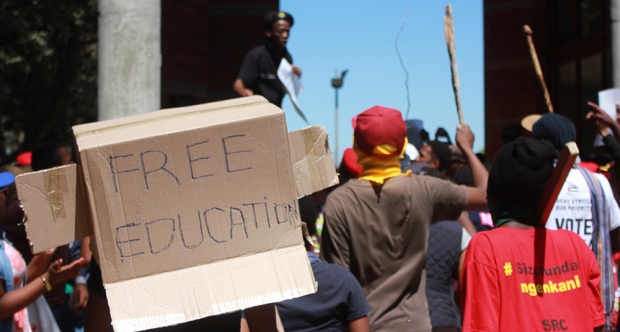 The Department of Higher Education has called on students to allow registration continue. Speaking to EWN, Deputy Director General Dr Diane Parker said, â€œIt seems that they are continuing to protest regardless of what has been put on the table and this is of great concern to us; particularly because there are large numbers of students who are wanting to register now, and are very interested in coming back to university in order to complete their qualification.â€

Students however say the impediments to wider access to higher education must be lifted.

At Wits University, students have vowed to persist with the disruption to registration.

The registration process was meant to kick off with incoming first year health sciences students, but this was shut down by 10am. There were snaking lines at the enrolment centre and fees offices at Senate (Solomon) House, with many students queuing up to submit outstanding documentation and finalise their places for the new academic year. Thabisile Magwala, 18, told The Daily Vox, “I’ve been accepted by Wits to do teaching. My funding isn’t secure yet though – NSFAS still want documents from me, so I’ve brought them today to submit them. Without NSFAS, I don’t have any options. My mother is a security guard, and my father stays in the Eastern Cape. Without this, I’ll have to get a job or stay at home.”

Meanwhile, the SRC released a statement outlining their four demands of management – debt clearance, free registration, a commitment to the realisation of free education, and the implementation of all commitments made in 2015 regarding student and worker issues. Jessie Twala, 45, a parent accompanying her daughter as she attempted to register for medicine today told The Daily Vox, “My daughter was accepted for medicine, but now they say there’s a protest. It is frustrating, but I understand the reasons for it. R10 000 upfront is a lot. I’m a single mother and I’m not working.”

The SRC tweeted late on Monday that all registering students and their parents who were without accommodation for Monday night should seek the assistance of the SRC.

At the University of Johannesburg, Daily Vox reporter Mbali Zwane says a group of students protested against the universityâ€™s system of online registration for its implicit exclusion of potential students without Internet access, were prevented from entering the campus.

At the University of Pretoria meanwhile a group of 300 students occupied the Client Services Centre, effectively shutting down registration, in a protest against outsourcing.

The University of South Africaâ€™s Sunnyside campus also saw protests against outsourcing on Monday . Here, students unable to register online had travelled to the campus to register in person, but were prevented from doing so.