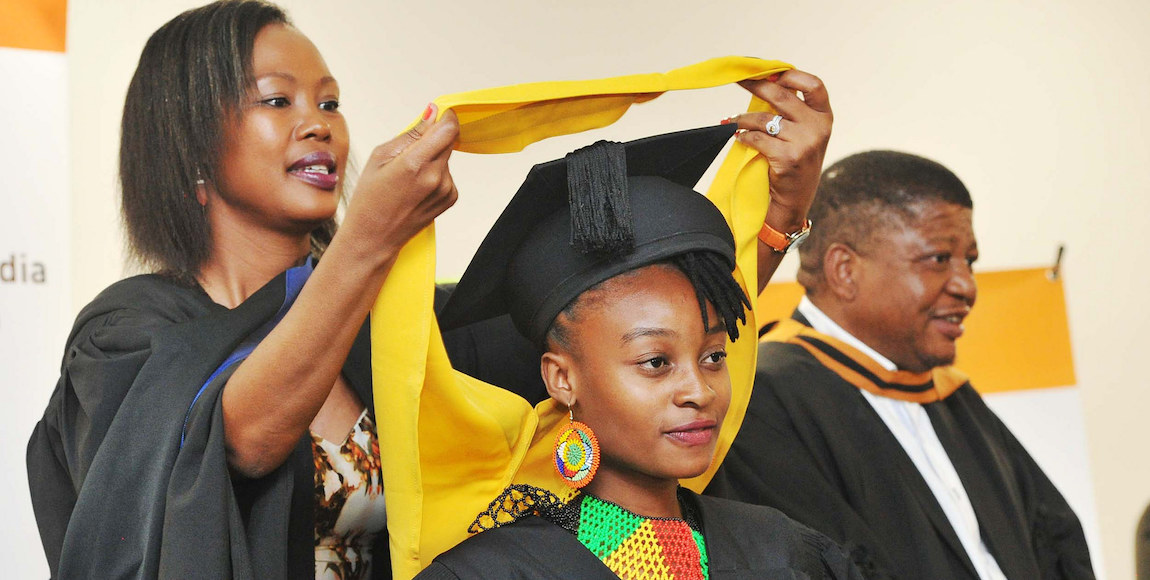 Graduation ceremonies are meant to mark the start of a new chapter where degrees equal opportunities. But entrenched structures of privilege mean that graduates often take very different paths after they step off the stage. Sumaya Hendricks reflects on the impact social capital has on one’s ability to make plans.

It is graduation day at the University of Cape Town. Mpho and Samantha make their way to Jameson Hall flanked by their families.

As Mpho’s name is called and she makes her way to the stage to be capped, her mother and grandmother ululate. Their voices reverberate with love, hope, anticipation and relief. Mpho is the eldest of three children and the first in her family to obtain a degree. Mpho’s mother sends pictures to everyone. She wants them to all know that her daughter now has a degree.

As Mpho goes to bed that night, the elation of the day subsides and she begins to reflect on the weeks to come. She has yet to secure employment and while she had hoped that her humanities degree would hold her in good stead, she is fearful that it is not sufficient to enable her to financially elevate her life and that of her family.

As Samantha’s name is called and she makes her way to the stage to be capped, her parents and younger brother look on with admiration. Their claps reverberate with love and hope. That night they go out for dinner and Samantha’s parents serenade her with affection. As the night progresses, Samantha’s parents meet acquaintances who are also out celebrating their children’s graduation. They meet Erik and Jessica, both of whom are doctors, and their son who just qualified as a doctor.

While Erik and Jessica lavish praise on their son and his choice of pursuing medicine, the families bump into John and Amy, who are known to both families. While the families speak of their children and their plans for the future, Amy advises the newly qualified doctor to consider applying for a PhD at the University of Oxford and John tells Samantha about various NGOs she could apply to once she completes her honours degree the following year. John gives Samantha his card and says to contact him if she wants to be put in touch with any of the organisations he mentioned.

As Samantha goes to bed that night, she reflects on the excitement of the day and on the weeks to come. As she recalls the NGOs that John had suggested, she maps out the next few years in her mind. She thinks about where she wants to work and study as well as the list of places she wants to travel to. She feels content with having pursued a humanities degree as it has allowed her to determine what her interests are and has broadened her postgraduate options.

While fictitious, the story of Mpho and Samantha encapsulates the very different lives that black and white South Africans live. Not only are there glaring differences in financial welfare – with impending penury being a legitimate fear for Mpho – what is also at play are the networks of privilege that young people like Samantha operate in, which perpetuate the status quo. This phenomenon can be described as social capital. It speaks to the ability of individuals to derive benefits from a social network or social structure to which they belong, and may be informal or formal in nature. A manifestation of these social relations is goodwill, which is generally considered a valuable resource. One of the products of this goodwill – as illustrated by John and Amy’s exchanges – is information.

The concept of social capital has gained some currency, and is deployed both directly and indirectly in mainstream South African discourse. For instance, academic Nomalanga Mkhize speaks of how there are those whom she teaches, who regardless of their academic performance at university have their lives “already taken care off”, not because they necessarily come from wealthy families but because they have the kind of networks and social capital which gives them privileged access to business and professional opportunities.

An example of an indirect reference is when Julius Malema in the EFF’s 2016 manifesto launch spoke of young people having skills but not having the networks to exploit those skills, and about the need for young people to be supported so that they are able to use their talents.

These views echo some of what has been written about social capital in academia. According to researcher Kim Baldry, the effects of apartheid continue to have an impact on the lives of the previously disadvantaged who, despite their a higher education qualifications, have weak connections to the labour market compared to their white counterparts.

Those who were advantaged under apartheid have the kind of social networks which make transitioning from work to employment easier. A 2013 Cape Higher Education Consortium (CHEC) study found the number of white graduates who benefited from having a job “through referrals from family and friends or through being asked to apply for the post” was three-times higher compared to black graduates. In the absence of these networks, black graduates resort to less effective job search methods and so are more likely to be unemployed compared to their white counterparts.

The Samantha and Mpho narrative illustrates this cognitive social capital. Samantha, over the course of her life, has had the opportunity to engage with her parents – friends and colleagues. These friends and colleagues would, to varying degrees, include people who are educated, accomplished and wealthy and consequently, for Samantha, it is less intimidating to engage with people who have a similar profile. This is likely to have a positive effect on her level of confidence and her ability to express herself in situations such as a job interview or in an academic setting, which requires engagement with a demographic of people similar in profile to what she is accustomed.

Additionally, seeing that Samantha operates within a network which forms part of the dominant culture. Her norms mirror the norms of that grouping of society which yields social and economic influence. In other words, Samantha does not need to alter her behaviour to fit in as her social capital has afforded her the opportunity to develop in a way that is in accordance with the dominant culture. One often hears of black people – even those who have attained some degree of success – feeling like a charlatan, worried that they will be discovered to not be as good as their counterparts. This can be partially explained using social capital.

Individuals who have the kind of social capital from which benefits can be derived are not necessarily the richest in society. For instance, sometimes people who belong to a particular ethnic group are able to develop an “ethnic niche” whereby they are able to dominate a particular employment sector. Individuals within these different sectors who benefit from these ethnic niches may not be the most educated or the richest in society but they are able to accrue benefits owing to their membership of these groupings which outsiders are not able to amass.

It is hoped that by better understanding the extent to which privilege reinforces itself in South Africa, those who are in a position to help others will be moved do so. We can help others succeed by sharing not just what we know, but who we know.

Sumaya holds a MSc in Social Business and Microfinance from Glasgow Caledonian University (GCU) in Scotland and is currently completing a Doctor of Philosophy (Education) at the University of Witwatersrand. She is the former Coordinator of the ASRI Future Leaders Fellowship Programme and served on the 2009/2010 SRC at UCT in the position of Chair of Academics. Follow her on Instagram and Twitter, or visit her website.