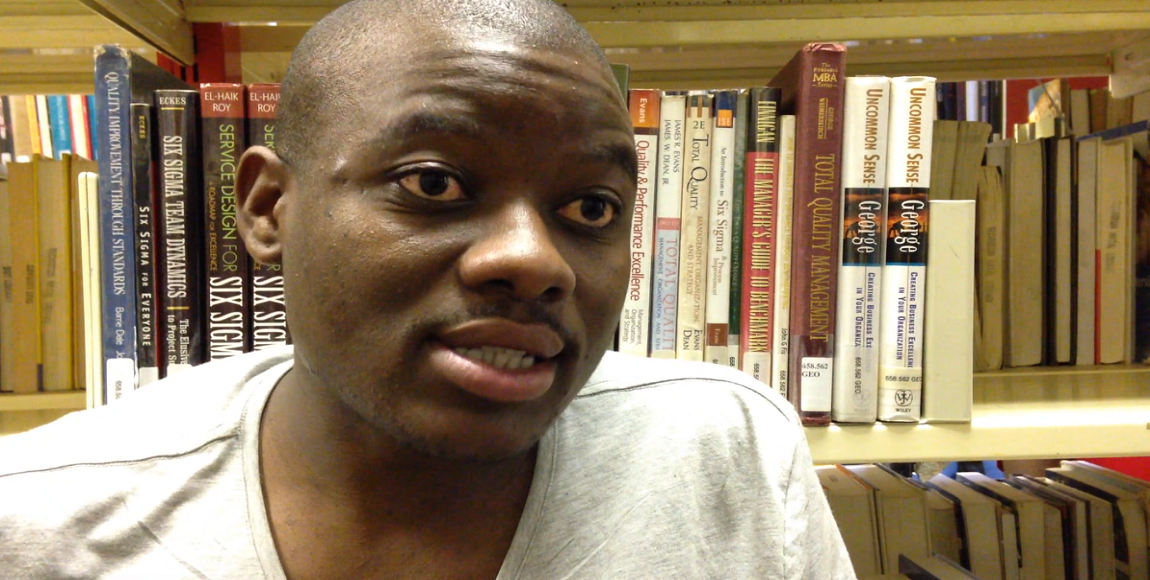 Fees Must Fall activist Bonginkosi Khanyile was finally granted bail on 1 March following a five-month stint in prison. Khanyile was arrested in 2016, along with with 28 others, on various charges related to the #FeesMustFall protests. He was granted conditional bail, but was arrested again during another protest. Khanyileâ€™s bail was denied many times before being taken to the Constitutional Court.

The Daily Vox spoke to Khanyile about his time in prison and the movement.

What was your time in prison like? You said you read a lot of revolutionary history. How did that arm you in the fight for free, decolonised education?

It armed me because normally when you are in prison, you are bound to have some feelings of loneliness. Others even suffered from depression but when you have something to keep your revolutionary morale high – thatâ€™s when you are able to survive.

What I did was to get revolutionary books â€¦ They teach you that the revolution will never come on a silver plate. The oppressor will never surrender his privileges. The oppressed must fight for their own liberation. Us, as people who are in need of free decolonial education, are not going to be given it by government. We must fight for it.

I have learned that during difficult times, your strength is tested. If you are able to survive difficult times, that’s when you can conclude that indeed you are a tried and tested cadre. When the time of difficulty was approaching I had to replay such thinking in my head and keep moving.

How were you treated in prison?

Initially, there were prison warders who were very problematic. They were questioning: why are you still striking when we are in a free country? Some did not believe we would achieve free, decolonial education. However, as the time went by, I was able to conscientise at least 90% of them. They agreed with me, started to sympathise with the cause, and even pledged solidarity.

I was in the process of making a class – if I never got bail … Prisoners who were interested in revolutionary theory could be allowed to meet so that we could run political classes. Everyone who is prison – most of them – is because the system that is outside is failing them.

In 2016, would you say the movement lost support?

Yes, but not that much – just a few individuals. I think we were able to win them back. There was a popular narrative that we had taken a path of violent protest – which, in the movement we hadnâ€™t adopted. But also, one should understand that during the revolution, it is the oppressor that defines the nature of struggle.

As we move forward, we cannot say we will never adopt violent measures towards the state. So far we havenâ€™t, but obviously if they continue to suppress, to militarise campuses, call police officers, arrest us unnecessarily, there will be times when we must adopt violent means to respond to violence.

How do you feel about the current state of #FeesMustFall?

Thereâ€™s a different feeling now that I have been released from prison. [When I was in prison] I thought that many fallists had reached a state of fear and a state of paralysis to their activism. However, when I came out [I found that] people are ready on the ground.

Do political parties have a space in #FeesMustFall or should it be a movement for students, by students?

The #FeesMustFall struggle is not an apolitical struggle. Thereâ€™s nothing apolitical in a society. Thatâ€™s how the capitalists and the oppressors dribble us. When you want to change the system they say you are being too political, yet they are political with everything. You know oppressors, they are even political about soccer. So free, decolonial education is a political call. So yes, we must lead our own struggle as students. It cannot be led by someone else who is not a student because it is us as students who understand our own problems and it is us who can provide our own solutions.

#FeesMustFall2016 was met with heavy-handedness from the state and by police. How did you feel about the state’s tactics, interdicts and militarisation of campuses?

We are traumatised to say that the black government can respond just like [they did in] the apartheid era. We thought that whites, by virtue of being white, it is inherent for them to be oppressive to us because whites have oppressed almost all nations. But now if itâ€™s a black man, a former liberator is todayâ€™s oppressor, it becomes very sad. But itâ€™s fine, we canâ€™t be crybabies.

Khanyile is awaiting his trial, which will be held later in March.