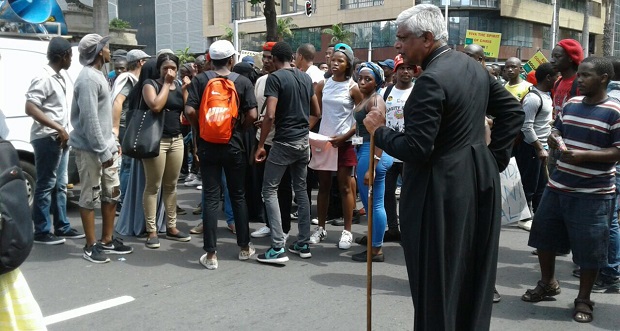 On Tuesday, students from various universities, including the Durban University of Technology and University of Kwazulu-Natal, marched to Durban’s City Hall to hand over a memorandum calling for free education to the mayor. The studentsÂ had the support of various religious leaders as they marched. Kwazi Dlamini spoke to some of the members of the clergy who were there.

Reverend Alvin Sigamoney, Anglican Church, Diocese of NatalÂ
[dropcap]â€œ[/dropcap]Weâ€™re supporting the students and the Fees Must Fall movement for free education and weâ€™re calling on the government to take this issue seriously. Itâ€™s a critical issue. And government needs to come to the party. They must stop all their corruption, Zuma must fall, so must the government of gravy trains. Itâ€™s not the government of the ANC, itâ€™s the government of gravy train, they’re all on a gravy train. The students are justified. Thereâ€™s so much corruption and money is being used aimlessly. Only the politicians are the ones having the nice houses, nice cars and all that. And whatâ€™s the future of the students? Even if they do their degree, where are they going to get a job? So, we are supporting the students and our children are all part of it. So the church is also calling for this [free education]. We donâ€™t know how itâ€™s going to work out,but at least they need to negotiate. The government is not coming to the party to negotiate. Their priorities are all wrong. Itâ€™s a serious matter, because these are future leaders. Zuma and the government, weâ€™ll all die one day. So we need to leave them with some good legacy. We need to be people of integrity, leaders of integrity, in this country and in this world.“ Bishop Mike Vorster, Methodist Church of Southern Africa
[dropcap]â€œ[/dropcap]The reason I am here is that many of the students are members of our congregation and I also believe that the Fees Must Fall campaign has again highlighted the economic disparities that we have in our country and I think that certainly as a church we are always concerned with those of the least amongst us and the poorest amongst us. So in a way, itâ€™s an act of solidarity and also a way of encouraging peaceful ways of protest.

Free education, I think is possible. Itâ€™s just about economic will and political will.Â There are economic formulas that we can use to source funding, that can create free education from early childhood development all the way to tertiary education. I think itâ€™s just a case of pointing people in that direction, for them to investigate, research and we actually do have the resources. For instance, we seem to be able to find trillions for nuclear power but we can find much better, cheaper sources for energy and we can use those trillions of rands and pump it into education. Our concern is that we have heard the government narrative and weâ€™ve heard the management narrative and I think today we have heard very clearly the student narrative which is often lost in all the other narratives. I think students have been portrayed as unruly and undisciplined but here the vast majority are disciplined and they want peaceful protest. There might be some other sources that create the havoc and chaos but, by and large, I think most students here want change and they want to do it peacefully. That for me is the clear narrative that needs to be painted out there. These are intelligent students, theyâ€™re not anarchists, theyâ€™re organised and they are disciplined.â€

#KZNFMF: Police spox telling students that they will not be shot if they go home and thanked them for keeping it peaceful so far. pic.twitter.com/lu0NajIEgN

Reverend Vernon Hammond, Anglican Church, Diocese of Natal, and student
[dropcap]â€œ[/dropcap]We are here to say that the church supports peaceful protest, peaceful demonstration, peaceful marches and we are here to tell society at large: the students are not violent. As you can see from todayâ€™s march, not even one incident of violence. If they are given space to express themselves freely without being provoked, they will be able to maintain their discipline and march and say what they want to say peacefully. All we are trying to do as a church now is we are going to try and provide a platform for them to speak.â€