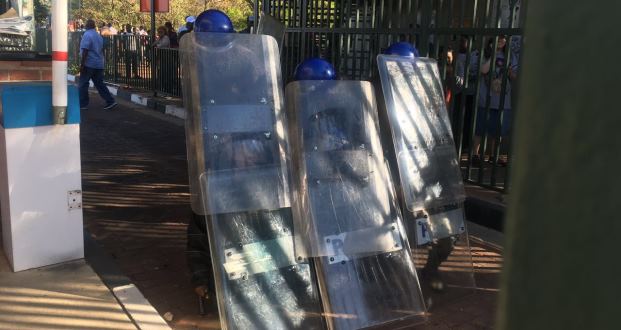 After a peaceful two-hour march from UJ Kingsway campus to Doornfontein, students attempted to enter their campus to hold a mass meeting. Yet as they attempted to push the gate open, they were met with the force of dozens of UJâ€™s private security -known to students as â€œbouncersâ€ – who stormed the gate and hurled rocks back to students, also beating students and journalists.

I was present at the frontline for this and recorded the incident.

Private security attack students and police. Pepper sprayed me in the eyes for recording them #UJ campus pic.twitter.com/pjwEgESa8H

The bouncers were the same group who were present at Kingsway campus earlier that day – where students also had had altercations with security. Reporters also confirmed that they were threatened by the same security for recording footage of what had taken place.

These guys need to go. They threatened to pepper spray me and threatened to hit some of my colleagues at #UJ earlier today. https://t.co/NS2r95iXr0

So there was bad blood and, in my opinion, a definite vendetta on the part of private security.

As the bouncers attacked students, the police – whoâ€™d peacefully escorted students across half of Joburg without incident – attempted to mediate. They tried to stop bouncers from attacking the protesters. Being trained in crowd control, they no doubt understood the risks involved in having the situation escalate violently. Yet the police officer who pulled me beside him, saying I would be safer from the bouncers there, was also attacked by UJâ€™s protectors – for getting in the way of their assault.

As the police attempted to calm the situation, the same bouncer told me to throw away my cell phone. I told him I was with the media – at which point he pulled out pepper spray and directed it into my eyes. As I scrambled away blindly, students assisted me with water and their own clothing, to wipe away the chemicals. Soon after, another journalist was hit, pepper sprayed and had to fend off having his camera taken by private security.

The police later persuaded the bouncers to return to the UJ premises and began speaking to students who congregated in front of the campus entrance. Students then began putting up barricades using traffic signs and election campaign posters.

However, at some point, a number of police gathered in front of the students and started walking towards the private security, guns in hand. At this point, students seem to have suspected bad faith – a pre-emptive strike – and ran.

Things descended into chaos from here. Students broke bricks and began throwing a barrage of rocks onto the private security and police cornered at the entrance to the campus. Teargas was released and a fire was started next to the road above the campus entrance – which would come to form their base for attack. It was a proper siege.

Although students rallied and had the authorities on the backfoot for some time, police reinforcements eventually arrived and sandwiched protesters from both sides of the road. Police quickly dispersed the crowd with streams of rubber bullets and machine-launched stun grenades. The now-free bouncers then ascended the hill backed by police. Masses fled over the other side of the road as gunfire rained over them – journalists too.

During the chaos, some bouncers caught one group of journalists who immediately identified themselves as media with their hands up. Yet the bouncers forced them to kneel on the ground and proceeded to hit some of them with batons. One of these journalists, a black woman, was struck across the face and suffered considerable facial bruising. The journalists were then all pepper sprayed before the bouncers left them. It was later reported that a student was beaten by these same bouncers to the point of being unable to move – he was later taken off in an ambulance.

They attacked us. Private security attacked journalists who identified themselves as media. Told us to sit down and pepper sprayed #UJ

Later into the night, students burned tyres and attempted to retaliate but were eventually driven off by the police with rubber bullets and stun grenades.

Students at UJ have been complaining about the unwarranted brutality of private security since campus commenced on Monday – yet without media coverage, this issue is given little attention.

And the UJ vice chancellor himself admitted that private security have been overstepping the bounds.

â€œWeâ€™ve had two occasions now where private security has simply gone outside of the responsibilities that we have agreed to with them,â€ he said to journalists on Thursday.

He blames private security, who in turn, say they are only acting on the instructions of their client, UJ.

The fact, then, that journalists are now being targeted by private security, should be deeply concerning. Amid claims of private security sexually assaulting students, stealing from them and assaulting them without provocation – one must wonder what vice chancellors are more invested in protecting.