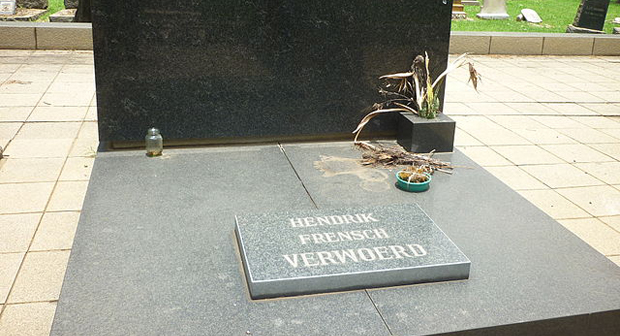 Itâ€™s not easyÂ to upstageÂ a newly elected leader simply due to a few misplaced words. But Allister Sparks did just that at the Democratic Allianceâ€™s elective congress on the weekend when he labelled Hendrik Verwoed, the â€œarchitect of apartheidâ€, as â€œsmartâ€. MUHAMMED ISMAIL BULBULIAÂ summarises the good, the bad, and the over-cautious responses to Sparksâ€™ speech.

So what did veteran journalist Allister Sparks actually say in his address to the DA congress? In his own words: â€œIâ€™ve encountered some really smart politicians â€“ Harry Lawrenceâ€¦ Margaret Ballinger, Helen Suzman, Zach de Beer, Frederik van Zyl Slabbert, Marais Steyn, Japie Basson, and, yes, Hendrik Verwoerd. But, after all those years, I have to say, objectively viewed (and) setting aside my personal friendship, I rate Helen Zille as the smartest political tactician of all.â€

Of course, being lauded as one of the smartest politicians alongside Hendrik Verwoerd requires some form of complimentary backscratching, which is why former DA leader Zille stepped up to defend Sparksâ€™ comments to the surprise of absolutely no one.

Zille said that critics were â€œtaking a part out of the speech and completely distorting itâ€ and that â€œthis is totally wrong in the context of the speech.â€ Yes, because saying Verwoerd was a smart politician can be contextualised, but saying Hitler can be admired for his â€œcharisma and organisational skillsâ€ is just plain offensive. Watch out, Wits University â€“ it seems as if Sparks has his eye on the SRC presidential vacancy.

The natural response to any form of praise directed atÂ the man responsible for formulating criticalÂ apartheidÂ policiesÂ is a) outrage or b) gently pointing the apartheid admirer in the general direction of Orania. Columnist Eusebius McKaiser chose the first option and Â spearheaded the wrath of Twitter by comparing Sparks to Dlamini and asking whether they were â€œon nyaope.â€ McKaiser expressed disgust at the silence and hypocrisy following Sparksâ€™ comments, saying that “the remarks by both are equally morally indefensible” and challenging Sparks to a public debate to â€œassess the moral weightâ€ of his comments.

Allister Sparks thinks like Mcebo Dlamini: Verwoerd and Hitler had good qualities. Are you guys on nyaope? #DACongress

Sparks, obviously not realising the gravity of his words, further fanned the flames by blaming the criticism of his comments on McKaiser, calling it a â€œmanufactured outrageâ€. McKaiser seized on the underlying message of Sparksâ€™ attempted deflection and responded that it is â€œabsurd that he can think that black people or progressive white people who were watching what he said, could not be outraged without my mediation.â€

The final course of action that one could choose to take in the advent of such ridiculous rhetoric is to write a column on the issue that doesnâ€™t address it at all. In aÂ column published on Monday morning, Business Day editor Songezo Zibi listed several issues that he wished to explore and analyse in further detail â€“ one of them being Sparksâ€™ comments â€“ and then abruptly ended his piece having analysed none of them.

Race relations are â€œat a low ebbâ€, writes Zibi, and South Africans are â€œangry about everything all the timeâ€. But instead of addressing any of the issues heâ€™s mentioned or offering a perspective on Sparksâ€™ comments, Zibi spends more thanÂ 800 words essentially being the girl that doesnâ€™t even go there from Mean Girls.

South Africans are angry and Zibi needs time to make up his own mind about Sparksâ€™ comments. Weâ€™re not specifically saying that this is because Sparks is a Business Day columnist (okay, maybe we are saying that), but still, maybe he has a point.

You can watch extracts of Sparksâ€™ comments in an eNCA video here.