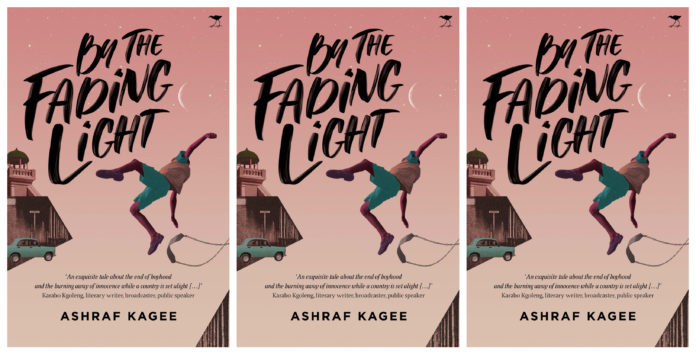 Childhood trauma has a way of changing people for the rest of their lives. But what happens when childhood trauma meets childhood neglect?  It is that question that Ashraf Kagee asks in his latest, By The Fading Light.

The book is set in Salt River, Cape Town in 1960. It follows three friends as they navigate childhood, the loss of innocence and the importance of friendship. The book is a quick read but packs a lot into its 191 pages. The principal characters of the book are 11-year-old Ainey, Cassius and Haroun. The characters who don’t occupy as much of the page who truly bring the story together like Sis Ghava, Amin and Norman.

The story starts with a bang and ends with one as well.

But reading through the middle of the story felt like reading a book based on the movie, The Sandlot. It’s just about these three boys who spend their days playing pranks, going to the cinema to watch the double-feature, and listening to the dramas on Springbok Radio. It seems like a funny childhood story but that’s definitely not the whole picture.

All of the boys have miserable home lives. Their parents don’t pay any attention to them. They are not accepted by other boys their age and they only have each other to lean on. That however is precisely the danger. As we learn at the beginning of the book, the fourth member of their squad, Amin, has gone missing causing some fear and panic in the community.

It’s interesting how Kagee manages to capture the emotions of the boys. While their days are spent playing around and making mischief, it is always in those final moments before they fall asleep when thoughts of Amin and their miserable family lives overwhelm them. As they are children though, there is that innocence with which they hope their friend returns safely and their home life will improve.

Speaking to The Daily Vox Kagee said, “I wanted to tell the story of childhood and the loss of innocence and the fact that when children inhabit a largely adult world their emotional and social needs are not necessarily attended to in the way they would like.”

As mentioned above, one of the characters that doesn’t appear on the pages a great deal but still plays an important role is Sis Ghava. She is a mysterious woman who lives on the edge of the community – in both a symbolic and literal sense. Through her, Kagee created an adult figure who understands the boys and gives them the support they are missing from the other adult figures in their life.

Without spoiling too much of the story, the character of Sis Ghava is important because she is intimately involved in the outcomes of the boys’ lives but also Norman. Norman plays the role of a kind of foil to the boys.

If you’re looking for a book that combines the innocence of the childhood experience against the intimate violence hidden in communities, this is the book to read. It isn’t all doom and gloom. There are some funny and sweet moments. There’s also the way Kagee threads the backdrop of the 1960s apartheid political landscape with the pop culture that the children consume. There isn’t any big lesson to learn from this book as Kagee said himself. Instead, it’s a book with good storytelling, compelling characters and a plot that will draw you in.

The book is part of the Exclusive Books Recommends for May 2021.