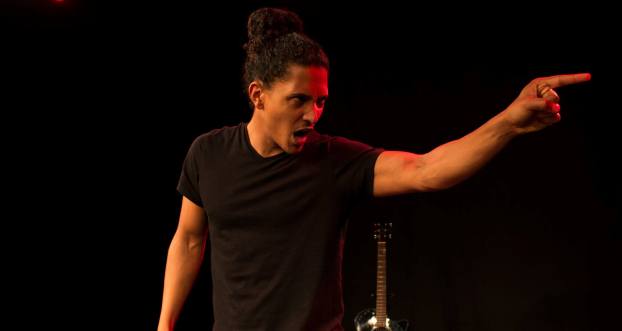 This piece of work is poorly served by its title – it undermines a serious work of critical contemporary socio-political commentary – by casting it as slapstick when it is anything but. It is irony, satire and spoof, replete with the character of a poof – a white PhD student. Playing this part, Daniel Mpilo Richards seamlessly slips in and out of the stock stereotypes of the South African social setup.

This solo revue is one that pokes, provokes and promotes. It pokes at politicians and people of power and influence. It provokes people’s consciences and consciousness. It makes the audience think. It carefully promotes an inclusive, cosmopolitan, humanist vision of society anchored in social justice but it does so not by simply imagining an idealistic future into will, but through trenchant examination of how the past has (mis)shaped the present.

Though much of the fun is in the superb performance, Mike van Graan has crafted a clever script as social criticism worthy of being read on its own, as a commentary on both the foibles of politicians, the concerns of the public and its mass media and the manner in which the public consumes and engages in contemporary current affairs. The script as text is conscious, literate, witty and gritty and arguably littered with a few obvious, if gratuitous and sometimes cringe-worthy, barbs, which are especially grating at the beginning. This minor irritation is especially acute at the start and is more salient in performance, than in text, I suspect. But sitting through a few fleeting moments of irritation is a small price to pay for what it will reveal. An intimate and perspicacious observation of current affairs woven into a pun(ny) and funny script that serves as both hilarious comedy and astute, articulate social criticism.

There are no props (except for an acoustic guitar) and there are no gimmicks. The props and gimmicks are all to be found in the script, the production and the performance. The solo actor has made a remarkable interpretation of Van Graanâ€™s work, bringing a dexterous musicality in tone, theatricality in movement, and fluency in expression. The script bears the stamp of Siv Ngesiâ€™s comedic spirit and sensibilities and trough the deft direction of Rob Van Vuuren, this work comes alive. These four â€“ the writer, director, producer and actor â€“ all synchronise and synthesise almost perfectly.

So, in spite of its silly title, the occasionally irksome and cringe-worthy predictability of a line or four (excusable for an hour and fifteen minutes worth of material), and the small lapses in comedic timing, Go see it! I enjoyed it. You will too. But donâ€™t go tired. Go alert.

Expect to be engaged, enraged and entertained for all of an hour and a quarter. Oh, and brush up on current events (especially South African), including the pet phrases and technical terminology. Recognisable in this piece are the conversations, observations and prejudices of the suburban dinner party, the taxi talk, the family function, the cafÃ©, the shebeen and the street. But if you live by the misguided adage – that avoids the talk of politics, sports and religion – then this piece is not for you, you will miss every reference, every joke, every pun and all the fun.

Pay Back the Curry runs from 24th November – 15th December 2016 at the Auto and General Theatre on the Square, Nelson Mandela Square, Sandton. It was directed by Rob Van Vuuren, produced by Siv Ngesi by arrangement through Daphne Kuhn, performed by Daniel Mpilo Richards and written by Mike van Graan.

Featured image via Pay Back the Curry on Facebook