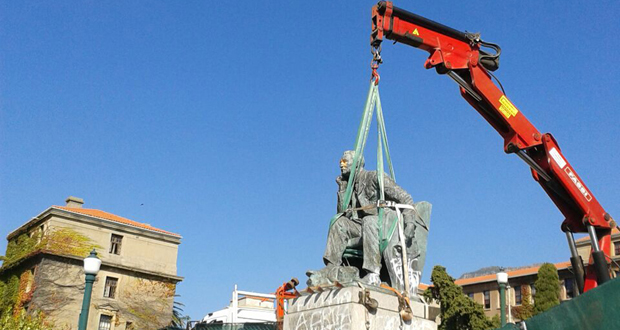 After almost a month of protests, led by the Rhodes Must Fall movement, the University of Cape Townâ€™s statue of colonialist Cecil John Rhodes wasÂ removed at 5pm on Thursday, 9 April.

The UCT Council made the decision to remove the statue on Wednesday eveningÂ andÂ Heritage Western CapeÂ issued aÂ permitÂ for the temporary removalÂ of the Rhodes statue from the campus. An application for the permanent removal of the statue must be made within 90 days and mustÂ include a process of wider public participation, according to a statement issued by the university.

Heavy machinery was brought in on Thursday morning, and workers strapped the statue securely before hoisting it away for storage off campus. The statue has been further defaced in the weeks since protestor Chumani Maxwele first threw a bucket of excrement at it. There wereÂ hardly any onlookers early in the day but a few people gathered to watch the preparations including some who engaged in performance art. By 5pm, when the statue was scheduled to be removed, a huge crowd had gathered in excitement.

– All images: By Sepideh Azari.