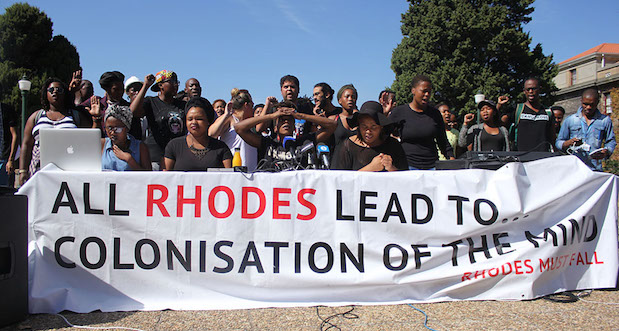 Members of the Rhodes Must Fall movement are looking for a new home after they were asked to leave the University of Cape Townâ€™s administrative offices at Bremner Building on Sunday night.The movement was served with an eviction notice from the Western Cape High Court on Friday. The court notice referred to four Rhodes Must Fall members who, according to the movement, â€œwould have to personally bear the legal and potentially financial bruntâ€ if the movement decided to defy the universityâ€™s demand for them to leave. The four people mentioned in the court order also previously filed complaints with UCTâ€™s campus protection service after university staff members allegedly assaulted Rhodes Must Fall students during their occupation of Bremner Building. Members of the movement spoke to RAâ€™EESA PATHER about the eviction, the alleged assaults against their compatriots, and how they plan to move forward. Athabile Nonxuba, 22, public policy and administration student, lives in res
Iâ€™m the first respondent accused by the institution. A white man, allegedly a staff member, bumped into me with his car, so I had no choice but to jump on top of the car. The movement gave a call that no one must pass through Azania House on that day. The man decided to pass through even though students were blocking the road, and I was in front of the car. The court must decide the charges, but the allegation is that Iâ€™ve damaged the car, which Iâ€™m not aware of because on that day the car was not damaged. Iâ€™m happy with what weâ€™ve done in Azania House. Weâ€™ve made some historical moments there; however, we are not confined to a space for us to move forward and express our demands. The management has promised to give us another space, and Iâ€™m happy with that, because we need one space where we can consolidate and plan ahead on how we can decolonise the university. Dominic Schorr, 22, mechatronics engineering student, Rondebosch
The eviction was bound to happen, but it was our home for a while. Weâ€™ll find another place, so we will deal with it. There were students who were physically harmed during our time at Azania House and itâ€™s annoying, because the university keeps on ignoring that and then saying we were intimidating staff members. At no stage did we physically harm staff members, there was only â€œintimidationâ€ in inverted commas in the form of protesting and singing and dancing outside, sometimes inside, their offices. The point was to occupy the building and thereâ€™s no point occupying it if weâ€™re going to let people continue as they were. Itâ€™s very frustrating to see the university take a one-sided stance, but of course they will â€“ itâ€™s their job. Mwinje Siame, 22, sociology masters student, Newlands
Practically, I guess the university needs its space, but managementâ€™s approach to Azania House might suggest that once we are out of Azania House, Rhodes Must Fall will be over and campus will go back to normal. Whether we are at Azania House or not, weâ€™ve changed campus and weâ€™ve broken this illusion that weâ€™re transformed. Theyâ€™ve been inflicting violence on us, so Iâ€™m not surprised dissident voices have been victimised. It just exemplifies the kind of violence weâ€™re privy to, whether itâ€™s as a black woman facing sexual violence with no recourse, whether itâ€™s the intellectual violence of having to learn things that dehumanise you and your people, or the physical violence against your black body. Iâ€™m not surprised. Zwelakhe R Lephoma, 29, film student, Walmer Estate
The eviction notice was very smart. It shows exactly how Empire operates and transformation is only going to be done as long as it suits Empire. Challenging them would have cost money and we donâ€™t have the money. We do have people who are willing to fund us, but we also donâ€™t want any student to be subjected to further marginalisation, which is what the university is prepared to do. The collective found it better to take our struggle where people wonâ€™t be subjected and where we can do it on our own terms at our own pace. Being black, you are used to being violated and itâ€™s sad, but students know that there are consequences to joining the struggle. Nokuthela Kalipa, 20, gender and sociology student
The universityâ€™s meant to be protecting us, so if theyâ€™re the ones assaulting us then who wonâ€™t be assaulting us? The registrar witnessed a student being assaulted and did nothing, and weâ€™ve asked the university to put him in order, but heâ€™s still sending us letters. The eviction notice was them trying to minimalise our struggle, in a sense that theyâ€™re probably thinking it will demotivate us and theyâ€™ll separate us. Itâ€™s going to take a while to decolonise the university: it wonâ€™t happen overnight, itâ€™s a process. Itâ€™s important for us not to lose momentum and to carry on fighting the structure within the university.

In a statement released yesterday, Gerda Kruger, the executive director of the UCT communications and marketing department, said: The university will pursue disciplinary action in cases where we believe the legitimate boundaries of protest action were exceeded, but we remain open to receiving proposals on how to resolve these matters.â€