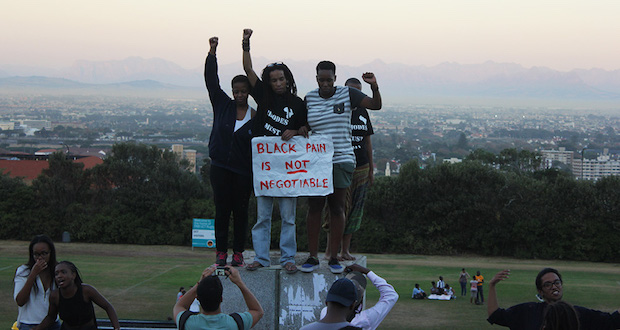 It’s been more than a month since Rhodes Must Fall burst into action at the University of Cape Town (UCT). With the statue gone, the movement is now planning the way forward with the monumental task of decolonising the university. RA’EESA PATHER rounds up everything you need to know about what the movement stands for and how it plans to continue its mission. 1. Decolonising the university
Although members of the movement still call themselves Rhodes Must Fall, the name refers to the fall of systematic oppression born from colonialism, rather than simply to the fall of the statue. For the movement, transformation is as a catchphrase that’s been around 20 years and yielded little meaningful change. Instead, the movement is calling for universities to be “decolonised”. This means creating a campus environment that is welcoming to black students. The response from some UCT students to the Rhodes Must Fall movement has revealed the day-to-day racism that slips under the campus radar – white students calling black students in the movement “monkeys” and “k****rs” or “savages” who “destroy everything they touch” on social media; black staff and students frequently reduced to tears by the racism they encounter from their peers.

“When we say ‘Rhodes Must Fall’ we mean that patriarchy must fall, that white supremacy must fall, that all systematic oppression based on any power relations of difference must be destroyed at all costs,” Kealeboga Ramaru, a student in the movement, said just before the statue fell.

The movement plans to address decolonisation through a three-pronged approach: the university must hire more black academics, it must stop outsourcing workers, and it must develop an Afrocentric curriculum. 2. Moving beyond UCT, to other campuses
The students of RMF are not here for a programme to relocate statues – they’re in it for the long haul. Their aim is to fight against racism at the institution and create a space where they no longer feel marginalised.

“This is not about the statue, it’s about us. It’s us finding a voice and finding a community within UCT that represents us in the manner that we want,” Masixole Mlandu, a student in the movement, told The Daily Vox.

Rhodes Must Fall has sparked discussion about transformation at Rhodes University, UKZN and Wits University and plans to engage with its counterparts on other campuses to find ways to move forward with the process of decolonising academic institutions. 3. Staying student-centric and apolitical
Rhodes Must Fall is a movement for students, led by students. While black academics on campus, particularly from Transform UCT, a body of black academics committed to transformation at the university, have voiced their support for the students, the elders are understood to be there to provide advice support, not to help lead the movement.

The movement is also not tied to any political party; instead it draws on black consciousness, Pan-Africanism, queer politics, and black feminism for its politics. The movement’s student body is diverse, and it attempts to reconcile its diversity through the development of intersectional politics that are inclusive of all its members.

It is also adamant that the decolonisation of the university will be led by black students. This stance is based on the writing of Steve Biko, who argued that black students must lead their own struggles. Nevertheless, the movement has positioned itself a place for people of all colour, including white students. 4. Confronting management
Just before the statue fell, Rhodes Must Fall said that its enemy was the university’s management. The students believe management has ignored cries for transformation and the pain endured by black staff and students as a result of racism at the institution.

Management’s move to evict the movement from Bremner Building after the statue fell and to take disciplinary action against students perceived to have exceeded the “legitimate boundaries of protest action” meanwhile has created further tension between management from the movement.

â€œWe must at no point forget that management are our colonial administrators, and their removal of the statue is merely an attempt to placate us and be perceived as sympathetic,” Kealeboga Ramaru, said on the day the statue fell. “Our freedom cannot be given to us – we must take it.”

UCT vice chancellor Max Price has rejected this position, saying that viewing management as the enemy is divisive rather than constructive. 5. Being transgressive
From its very inception the movement has pushed people’s buttons, starting with its defence of Chumani Maxwele’s poo protest, to excluding white students from certain fora and chanting “One settler, one bullet!” at its protest events. But the movement’s more transgressive actions appear to be largely performative and designed to get people’s attention.

Although Rhodes Must Fall is apolitical, many students in the movement belong to student groups at the university. Pan-Africanism is one of its influences and the “One settler, one bullet” chant, historically linked to the apartheid-era PAC call inciting violence against white people, comes from members of the Pan Africanist Student Movement of Azania, the student chapter of the PAC at UCT.

The chant has been a cause for concern leading Price to say he is considering filing a complaint with the South African Human Rights Commission. But members of the movement have defended the use of the slogan, saying that black people identify with it as a rallying call to protest and tackle colonialism at the university through protest action, rather than incite violence.