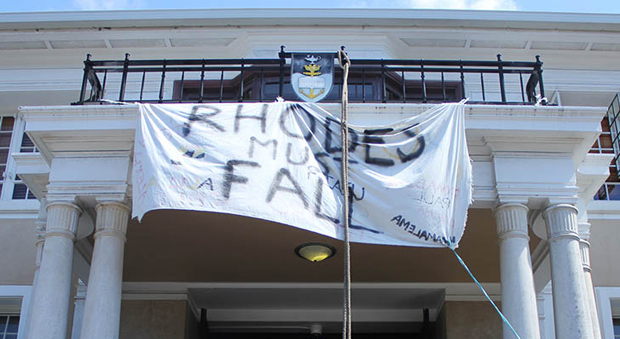 The Cecil John Rhodes statue at UCT has been boarded up, and students are in the second week of their sit-in at Bremner Building. But beyond the removal of the statue itself: what are the politics and demands of the Rhodes Must Fall movement? RA’EESA PATHER speaks to three students in the thick of it about why they reject white liberals, the importance of creating an intersectional movement, and why they prefer the term “decolonisation” to “transformation”.

Kealeboga Ramaru (21), Masixola Mlandu (22), and Ru Slayen (22) head into a conference room on the top floor of Bremner Building. They firmly ask staff members already inside the meeting room to leave, and the staffers dutifully comply, conceding to the students. “Symbolically, what we’ve done is so powerful,” Ramaru says, sitting at the big conference table. “We’ve brought this space where decisions are made without our consent and said, “Look, this is our space too, and we deserve to be here.”

Ramaru, Mlandu and Slayen are three members of Rhodes Must Fall who’ve been there since the beginning. They say that the movement has no leaders, and students have banded together on a horizontal level to make it all work. Through their involvement in political student groups, the three have become familiar faces on campus.

When student protestor Chumani Maxwele threw excrement at the UCT statue of Cecil John Rhodes, it provided the impetus for the students began to embark on a series of protests that would lead them to live together in occupation of Bremner Building.

Maxwele’s protest mobilised small meetings on how institutional racism and the university’s lack of transformation could be addressed, and from these meetings Rhodes Must Fall emerged. “In our first meeting we started with speaking about how we were going to address the pain in the room before we started addressing our pain to the world. That was about trying to forge this space where everyone could be welcome,” says Slayen, an honours student in applied mathematics.

Although the majority of the movement comprises black students, white students have been active in the campaign, too. In some instances, though, their roles have been restricted. On Sunday, Rhodes Must Fall invited “all people of colour” within the movement to an “important meeting”, from which white students were excluded. This raised tensions on social media.

attend an important meeting tonight. That is:…

Posted by UCT: Rhodes Must Fall

But it was a considered move. Drawing on black consciousness principles, the campaign has limited the involvement of white people to ensure that black people remain leaders of the movement and to safeguard it against white liberalism.

In its mission statement, the movement quotes Steve Biko, “For a long time the black has been listening with patience to the advice he has been receiving [from whites] on how best to respond to the kick. With painful slowness he is now beginning to show signs that it is his right and duty to respond to the kick in the way he sees fit.” “This is not about the statue, it’s about us. It’s us finding a community within UCT that represents us in the manner that we want. Hence, we are always critical about who speaks about our movement the white liberals and all those people [who don’t understand],” says Mlandu, a humanities student majoring in political science and sociology.

The politics of Rhodes Must Fall are still undefined, locked in what Ramaru, an honours student in gender and transformation, calls an “exploration phase”. The movement has attracted students from all backgrounds, political influences, and ideological creeds, bringing robust debate and difference into the campaign.

Their buzzword is intersectionality, particularly the intersection of Black Consciousness, Pan-Africanism, queer politics and black feminism, which are all represented through the body of students in the movement.

The three students The Daily Vox spoke to represent some of this diversity: Kealeboga belongs to Say-F (South African Young Feminist Activists), a black feminist student group; Slayen is part of the the Left Students Forum; and Mlandu belongs to Pasma (Pan Africanist Student Movement of Azania), the PAC chapter at UCT.

“We’re trying to incorporate all of that and it’s really difficult, but it’s happening,” Slayen says. “Essentially, we’re creating a new politics that we need right now.”

While their politics might be uncertain, the movement’s demands are clear: calling for the inclusion of an Afrocentric curriculum, the promotion of workers’ rights and an end to outsourcing, and the employment of more black academics.

UCT RHODES MUST FALL MISSION STATEMENTWe are an independent

collective of students, workers and staff who have come…

Posted by UCT: Rhodes Must Fall

The students have rejected transformation as a superficial catchphrase andÂ instead specify that the university must be decolonised.Â â€œFrom the time that it was colonised there was never an attempt to decoloniseÂ the university. The university culture is still very white, itâ€™s very elitist,Â patriarchal, and itâ€™s very heteronormative,â€ Ramaru says.

But the movement, although appreciative of the SRCâ€™sÂ support, has maintained independence from the student governing body, beingÂ â€œfully aware the SRC as a body operates inside of management structuresâ€, asÂ Slayen says.

Despite being in such close quarters with UCT management, in the heart of theÂ universityâ€™s administration block in Bremner, the students have shown noÂ interest in negotiating with management, particularly on terms set byÂ management.

â€œAny engagement on managementâ€™s terms around this thing will be silencing toÂ us. Their attempts to engage us havenâ€™t been with the people who have theÂ problem, itâ€™s been this kind of pseudo-democratic â€˜Letâ€™s hear what you thinkâ€™,â€Â Slayen says, citing the universityâ€™s Have Your Say discussion boards, which wereÂ tainted with racist commentary from students. Vice-chancellor Max Price has proposed that teach-ins and seminars be held toÂ educate students unaware of the harm of Rhodesâ€™ legacy, but the movement has rejected the idea.

“It’s not our duty to conscientise white students,” Ramaru says. “If we were going to take up that role, we are compromised by virtue of the power dynamics that exist and it’s exhausting trying to explain yourself to someone who is not willing to understand.”

Although students are entering the second week of their occupation at Bremner Building which they have now dubbed Azania House they show no sign of relenting. They’ve kept the movement alive through protesting in shifts while their comrades attend lectures, and the establishment of six subcommittees to sustain and organise the movement: education (the Rhodes Must Fall literature includes writings by Biko and Fanon), radical action (which includes protests), writing, creative expression (such as performance protest), media relations, and support (which includes food donations).