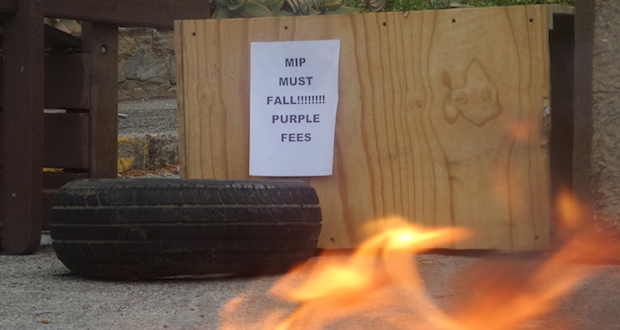 The university currently known as Rhodes was been brought to a complete halt on Monday morning, following student protests on campus. All academic activity has been stopped and most of the roads leading onto campus have been blocked with makeshift barricades made of benches, rocks, pinboards and burning tyres. STUART LEWIS reports for the Daily Vox.

Following a successful campus shutdown at Wits University, student protesters set up the barricades at midnight on Sunday 18 October in protest of the high cost of studying at Rhodes. Their main barricade is set up across the bottom of Prince Alfred Street, the de facto entrance to the Rhodes campus. There are secondary barricades set up across many of the other access routes to campus but many of them have been abandoned as protesters focus on the Prince Alfred Street barricade.

Protesters then went around to residences on campus to gather support for the march. At its peak, nearly 500 students were gathered at the main barricade on Prince Alfred Street.

An email was sent out to students by Rhodes University Vice-Chancellor Dr Sizwe Mabizela at 4:26am stating that the University had decided to â€œsuspend all academic activities planned and scheduled for Monday 19 October 2016â€. This was followed up by a similar SMS to students at 7:45am.

These protests follow on the heels of an emergency student body meeting called on Friday, 16 October, by the Rhodes SRC after students raised concerns about the high Minimum Initial Payment (MIP) for Rhodes on social media.

While students are seeking a reduction of the cost of studying at Rhodes in general, their main demand at this point is that the MIP be either drastically reduced or removed altogether as it would effectively exclude poor students from studying.

Several units from the Grahamstown police department have been deployed to the Prince Alfred barricade. Colonel MonrayÂ Nel, the officer in charge on the scene, stated that Public Order Policing Units had been summoned and that the protest was in fact illegal as it blocked a public road and tyres were being burned.

Mabizela arrived on scene shortly after the police units did and tried to negotiate with them to stand down as long as students remained within the borders of the Rhodes campus. He promised to meet students with management at 8:30am at the Prince Alfred Street barricade.

However, heÂ only arrived at around 9:20am, as he had been in a meeting with the Rhodes SRC to discuss the same issue. After proposing a possible reduction to 20% for the MIP which was rejected by the gathering, students suspended the meeting with him.

Mabizela has promised to wave an interest charge on students who are unable to pay their total fees by July. At present annual fees have to be paid in full by the end of the first semester and defaulting students are penalised with compounded interest.

Mabizela was set to address students at the Barratt lecture theatre at 11am.

While members of the Black Student Movement, a student movement at Rhodes, as well as members of the local EFF chapter have been highly visible at the front of the protest, it does not appear that the protest has been organised by any single group.

It is also unclear at this time how the protest will proceed but students have promised to continue demonstrating until their demands are met, even if it means disrupting the November examinations.

Editor’s note: A previous version of this article to referred to a Murray Nel. #TyposMustFall – It’s Monray Nel.Â