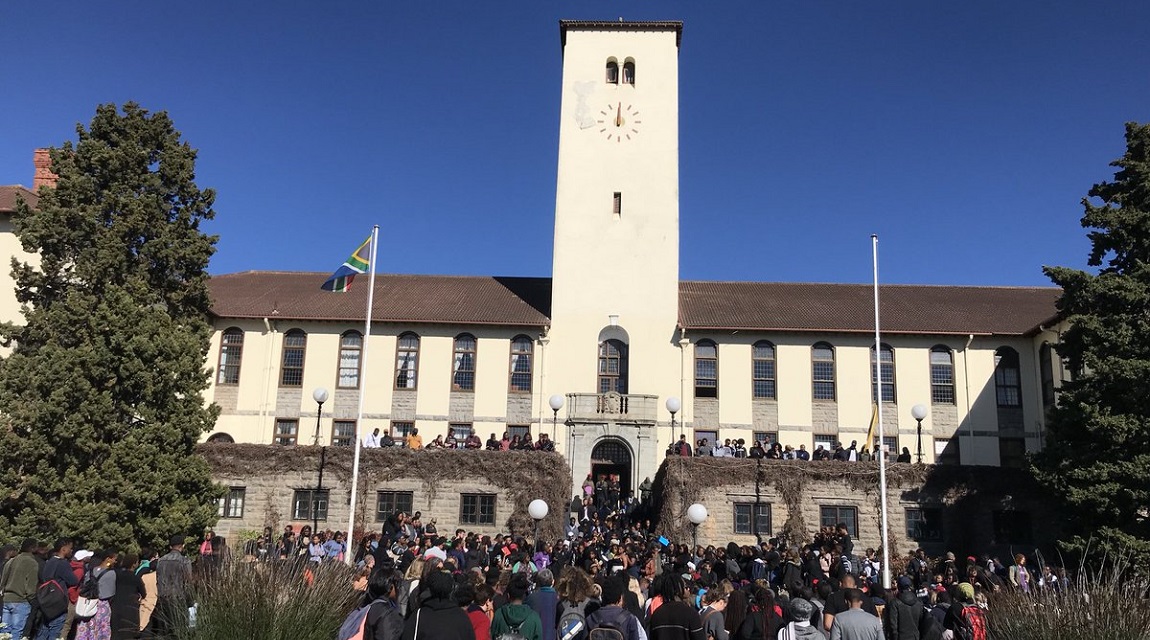 Students at Rhodes University are mourning the death of third year law student, Khensani Maseko. Maseko was allegedly raped by her then-boyfriend in May and died of apparent suicide at her home in Johannesburg on Friday afternoon. “The news of her passing has been received with great shock and sadness by the entire student body,” the student representative council (SRC) said in a statement. The university suspended academic activities for the day after it’s SRC announced on Sunday evening that it will protest in honour of Maseko.

Students gathered at Purple Square early on Monday morning where they sang protest songs and marched to the main admin building of the campus.

Nhlakanipho Mahlang, SRC president at USKAR, addressing students at #RUShutdown18 “we are here to mourn Khensani and to take a stand against rape culture” pic.twitter.com/TXdbw6ugSS

After a meeting between the SRC and management, the vice chancellor Sizwe Mabizela addressed the students. “We’ve just had a meeting with the deans and other leaders of this institution and we’ve taken a decision to mourn the tragedy that has befallen this institution. All academic activities today will be suspended,” Mabizela said.

The academic programme for Tuesday was also cancelled, and an alternative curriculum to combat rape culture has been organised. The curriculum will include a march in the morning, afternoon rape culture discussions and an evening anti-rape activism talk.

Mahlangu: “We are working with a task team to come up with a programme for tomorrow. The proposal is that we will have a march at 9am to Monument, at 2pm rape culture talks and at 6pm a culminate anti-rape activism talk” #RUShutdown18 pic.twitter.com/KrhufxfhDK

The flag of the university has been lowered to half-mast in mourning of Maseko.

“I did not know Khensani personally, but she was in my law class,” third year law student Kevin Obonyo said in an interview with The Daily Vox. “From what I know, Khensani seemed like a very proactive person. She took initiative, she answered a lot of questions in class. She commanded a lot of respect.”

Maseko was an active member of the student body at Rhodes. She was elected to be on the SRC and was voted Miss Varsity for the 2017/2018 year. Maseko sat on the Rhodes Independent Electoral Board, and was a fighter in the Economic Freedom Fighters Student Command.

This is Khensani Maseko, a 1995 born Served in the SRC at Rhodes University, a law graduate, she was raped, she suffered from depression thereafter she committed suicide. Rest in power fighterðŸ’” #RIPKhensani pic.twitter.com/mFNgIHKtUO

Obonyo said combating rape culture needs amongst students. “We need to have a dialogue especially amongst those who perpetrated, because we need to prevent it from happening in the first place,” he said.

“Management of the University need to do a better job,” Obonyo added. He said it seemed as if incidents of sexual violence “get swept under the rug” as management forget about them. If management is not more proactive and will not implement the policies that are there, then we’re going to have the same problems, he said.

Rhodes students have been protesting gender-based violence on campus for years. The year 2016 marked the #RUReferenceList protest at the university where, in a show of guerrilla activism, a list of names of alleged rape accused was circulated on social media and at the university.

“I find it very triggering. I don’t think it’s fair how women generally don’t feel safe in this institution,” second year microbiology and microchemistry student Tumi Tsele said. “It’s unfair how it has to take a life for us to actually take action for something to be done”. Tsele said she hopes that after this protest, things will get better and students will feel safer around campus.

Georgina Snaddon, a first year journalism and media studies student, said although she wasn’t fully aware of the protests against rape that had happened on campus before, the lack of effort from management since then is “frustrating”.

“I think this experience has been sad but inspirational because of the people that are here,” she said.

In a statement, the SRC said Maseko’s last post on social media was a “haunting suggestion of the woeful circumstances she faced when she was alive”. Maseko’s death comes in Women’s Month, a time of the year when South Africans are to emphasise and support women’s rights and resolve to end gender-based violence. It also comes after the Total Shutdown protest against gender-based violence on August 1 and the Silent Protest at Rhodes on Friday.

The funeral of Khensani Maseko will take place on Thursday, the university will hold a memorial as well.

The academic activities at Nelson Mandela University are also temporarily suspended after a reported sexual assault incident on campus over the weekend. A criminal charge was opened against the alleged perpetrator, who is also a student at the university, with SAPS and the university is gathering necessary intel to pursue internal disciplinary action as well.

Author’s note: This story has been updated.