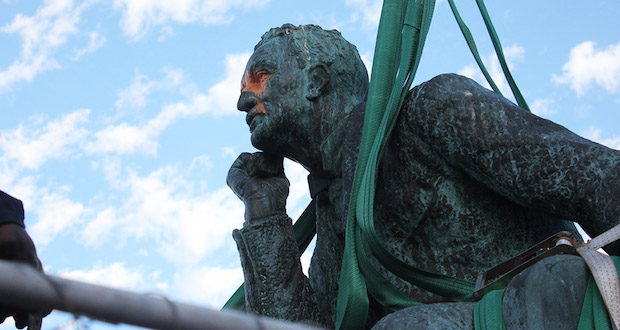 On a hot Thursday evening, the statue of Cecil John Rhodes was finally removed from the University of Cape Town. It happened exactly one month after UCT student Chumani Maxwele threw faeces at the statue to protest against racism at the institution. After four weeks of dialogues, protests and confrontation, led by the Rhodes Must Fall movement, the moment for the demise of the Rhodes’ statue had finally arrived – to the jubilation of the students involved. RA’EESA PATHER was there. The statue was set to fall at 5pm, but the removal was delayed. As students waited they sang protest songs, chanted and danced. Rhodes Must Fall led the celebrations, making it known that the removal of the statue was a culmination of student efforts.

“Our freedom cannot be given to us – we must take it. We want to be clear that our only regret is that we did not take the statue down ourselves,” said Kealeboga Ramaru, a student involved in the Rhodes Must Fall movement. Thousands of people descended on the steps leading up from the rugby field to Jameson Hall. Rhodes Must Fall marched from Bremner Building – which the movement has occupied – to the statue, arriving at 5pm. Although the removal of the statue had been spurred by their protest, there was by this time little space from which their supporters could observe its fall. Construction workers brought in to remove the statue were surprised by the excited crowd that had gathered to see Rhodes off.

“I was here since early this morning getting everything ready and prepping everything and it culminated into something I did not expect. I expected him to go peacefully, but what happened, it just blew my mind,” said Rihaaz Shabodien, a foreman. Just before the statue was removed, someone from the crowd threw white paint at students hoisting a banner that read “All Rhodes lead to colonisation” Rhodes Must Fall protestors looked around in confusion, while their clothing – and their banner – were stained. The action showed that despite the diversity of the students in the crowd, not all were in agreement with the fall of the statue. At 5.30pm, students counted “5 4 3 2 1” and the statue was lifted from its pedestal onto the waiting truck. Rhodes’ face, smeared in orange paint, was a far cry from the brooding, honourable figure it had been depicted as from its tenure at the university. The atmosphere was electric, with cheers punctuated by deafening shouts from dancing students. For many students, it was the moment a symbol of oppression that made them feel unwelcome had finally been removed.

“It was a great moment. I felt like a load was removed off my shoulders. It’s one of those things where you feel like you’ve been waiting for it for such a long time and now finally it has happened,” said Siphokazi Mlambu, a 17-year-old Bcom financial accounting student. Students jumped over the fence that had been placed around the statue and clambered onto the truck. One student pasted a page bearing the words “We are not done yet” onto Rhodes’ face. For Rhodes Must Fall and their supporters, the fall of the statue marks the beginning of a campaign to achieve broader transformation and inclusivity on campus.

“It’s just such a liberating moment for a lot of people and I’m just glad that it happened,” said Spokazi Tati, an 18-year-old financial accounting student. “We are all here and we all studied and we all worked hard to be here. We should be treated the same.” Students rejoiced and revelled in the moment. Chumani Maxwele stands on top of the truck where the Rhodes statue sits. Although he has been at the centre of the storm since his controversial use of faeces in a protest over the statue, he maintains that the statue’s fall is not about individuals.

“It’s not about us, it’s about the collective black pain of our people. Our humanity has really been degraded for a very long time,” said Maxwele, a 30-year-old politics student. As students climbed over the fence, police came forward, preventing anyone else from joining students on the truck. There was no violence from the students towards one another or the police. The truck drove away with students still on it, while many others chased after it. The statue has been stored at a location determined by Western Cape Heritage. The location has remained confidential owing to fears for the statue’s safety. Rhodes Must Fall has distanced itself from any political affiliation, even creating a clear separation between itself and the UCT Student Representatives Council. Yet political parties, particularly the Economic Freedom Front, have in recent days been accused of hijacking the movement against colonial structures.

“This movement is not a political party space,” said Zethu Matebeni, a senior researcher at UCT’s Institute for Humanities in Africa and a member of Rhodes Must Fall. “This movement recognises that in this city, in this country, there are political parties, but they will not have a voice in this movement.”

There was momentary chaos before the statue was removed, as people at the fence at the base of the monument pushed forward to demand the statue be taken away immediately. Construction workers told The Daily Vox that it appeared to them that the people involved represented outside political parties. Rhodes Must Fall has committed itself to continuing its campaign specifically focusing on the inclusion of an Afrocentric curriculum, the employment of more black academics on campus, and putting an end to the university’s outsourcing of cleaning staff. At the core of the movement, is the goal to fight against racism, sexism, and any form of bigotry at the university.

“When we say Rhodes Must Fall we mean that patriarchy must fall, that white supremacy must fall, that all systematic oppression based on any power relations of difference must be destroyed at all costs,” Ramaru said. Students took pride in what they had accomplished, remaining in the area hours after the statue had fallen. It was their work, as students, that led to what many have described as a historic moment. Rhodes Must Fall has denounced transformation as a buzzword of little meaningful action and has instead advocated for decolonisation of the university. Black students stood on the pedestal where Rhodes once sat. The statue of Rhodes that they once had to look up to was gone. Although students took pride in their moment, Rhodes Must Fall is far from over for them.

“We’re not stopping – if they keep the momentum up, we are going places,” said Mbali Msimang, a fourth-year law student.