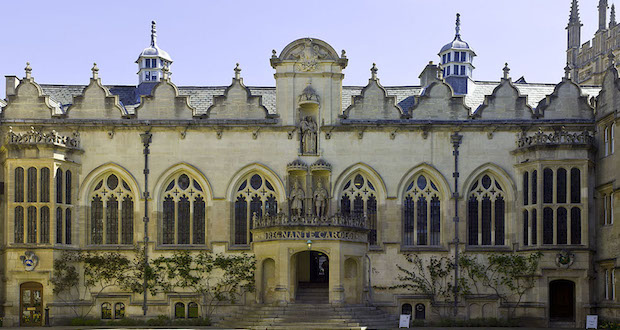 The #RhodesMustFall protests at the University of Cape Town have just jumped borders. A group of students at Oxford University in the United Kingdom have begun to demonstrate against the Rhodes statue in solidarity with students at UCT.

Students in Rhodesâ€™ home nation arenâ€™t too impressed with the colonialist hovering over their university. Ntokozo Sboh Qwabe, a student from South Africa studying at Oxford, took to Facebook to show that Rhodes isnâ€™t just a problem in South Africa â€“ his legacy is contested all over the world.

â€œDespite public order police being called to remove us prematurely, nothing could stop us from conveying the message! Rhodes Must Fall everywhere!â€ Qwabe wrote on Facebook.

Oriel College, which is home to 450 students from â€œall kinds of schools, backgrounds and countriesâ€, is one of the oldest colleges at Oxford University, which is made up of 38 colleges.

But with Rhodes standing above the doors to Orielâ€™s entrance, evidently the prestigious college isnâ€™t as welcoming as it likes to think.

â€œThere is no space for symbols of oppression and domination within the gates of learning,â€ Qwabe wrote on Facebook. â€œWe are in solidarity with students at the University of Cape Town in the struggle against institutional violence.â€