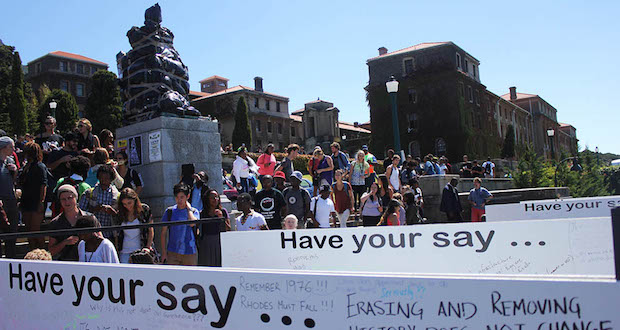 Students demanding that the University of Cape Town (UCT) set a date for the removal of a statue of Cecil John Rhodes on campus have entered the fifth day of their sit-in at the universityâ€™s administrative offices at Bremner Building. RAâ€™EESA PATHER was there.

It began on Friday, when students marched from the statue of Rhodes on upper campus to the universityâ€™s management block at Bremner Building on lower campus. Once at Bremner, students interrupted a speech by vice-chancellor Max Price, stormed into the building and occupied it.

The protest was peaceful, with students singing anti-apartheid struggle and victory songs as a rallying cry for transformation on campus. Beneath the statue of Rhodes, boards have been erected for students to air their views on the statue as part of the universityâ€™s Have Your Say campaign, which aims to encourage debate on the matter.

Some have cemented the call for the statueâ€™s removal, while others have questioned how removing the statue would accelerate academic and staff transformation on campus.

The writings have also revealed the racism on campus.

â€œNo 1 gives a flying fuck about you bunch of barbaric kaffirs. A statue won’t get you a degree you. Apartheid is over bitches,â€ one message reads. Hundreds of students converged on Friday to march to the Bremner Building. The protest was well organised, with students stopping the march along the way to ensure everyone was safe. A notice was put out asking people to watch their step near the tunnel at the rugby field, which leads to middle campus.

The roads/Rhodes pun wasnâ€™t lost on students, who shared in the good humour, calling it the â€œmost polite protestâ€. The good humour was momentarily dispelled when a tussle broke out after a man on the sidelines shouted â€œViva Rhodes, viva!â€ at the students.

â€œRhodes was greater than you,â€ he called out.

Some students rushed towards the man, while security attempted to calm the situation, urging them to ignore him.

From the crowd, one student responded: â€œThis is what we mean when we talk about white arrogance.â€ Negotiations between students and UCTâ€™s management have broken down since the protest began. Although Price has, in his personal capacity, showed solidarity with students, agreeing that the statue should be removed, the final decision sits with the university Council. Once they arrived at Bremner, the students joined staff and workers who were protesting outside the building in solidarity with studentsâ€™ demands for transformation.

â€œThe majority of workers that are not here, we know it because they are fearful of their jobs,â€ Berry said.

She went on to say that employers on campus mistreat workers, telling them that: â€œI donâ€™t have to talk to you but you have talk to me,â€ or â€œItâ€™s my world, get used to it.â€ Student Representative Council (SRC) president Ramabina Mahapa told students that through its use of symbols, such as the monument to Rhodes, the university is discriminating against black people.

Mahapa then announced to loud applause that a sit-in would be staged in Bremner Building.

He again emphasised that the SRC â€œdonâ€™t want to talkâ€ to management.

The SRC is represented on the university Council which is set to meet on April 15 to discuss the fate of the statue. Leaders of the protest refused to allow Price to speak at the end of the proceedings, but students in the crowd became restless, chanting â€œlet him speakâ€.

Throughout the proceedings, Price had been in the background, making notes on the complaints various representatives had laid. Speakers from the universityâ€™s transformation council condemned the slow pace of transformation on campus, and academic representatives rubbished the universityâ€™s reasoning that the lack of black staff on campus was a result of the 20 years it takes for a student to become a professor. Price was eventually handed the mic. He agreed that the statue should be removed, and suggesting that teach-ins and seminars be held to educate students who were not at the protest and who did not know about Rhodesâ€™ damaging legacy. But student protestors heckled and sighed in response.

The students also demanded that the university drop charges of assault against Chumani Maxwele, the student who sparked the Rhodes Must Fall movement when he threw faeces at the statue two weeks ago. The protests have caused divisions on campus, but they have also encouraged debate and understanding among students who have been encouraged to weigh in on the conversation. More thanÂ a hundred students had packed themselves into the foyer at Bremner. But on the hot, stuffy summerâ€™s afternoon, they soon exited the building to sing victory songs outside. The students have claimed Bremner Building to â€œdisrupt the normal processes of managementâ€ and â€œforce management to accept our demandsâ€. By Monday they had made their way to Archie Mafeje room, where management meets, so that they could â€œsubvertâ€ the activities of management.

The students will remain in the building for an indefinite period, supported by food donations. Black lecturers are lecturing students on transformation and Rhodesâ€™ legacy, while tutors have been organised to assist students with their studies during test week.

â€œComrades, bring your toothbrushes,â€ The Rhodes Must Fall movement said in a statement. As the protest continues, students and management are still locked in a negotiation void. The Council will meet in less than a month, but the students have already shown they are unwilling to wait.