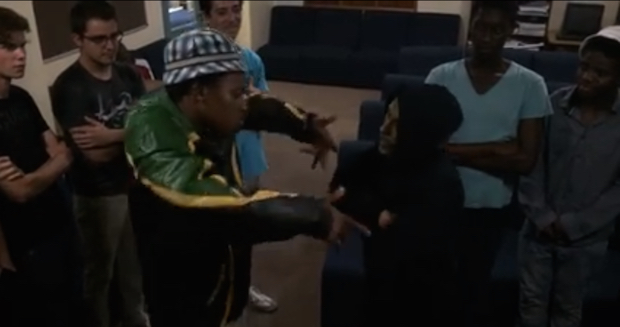 Rhodes students have taken their #RhodesSoWhite revolution from placards to a video. A video doing the rounds on Thursday showed wannabe MCs facing off in a Yo-Mamma-style battle but with a #RhodesSoWhite theme. It has been shared on Facebook more than 900 times in less than a day.

While enacted with a light touch, the exchange depicts some of the race realities that exist at the institution:

â€œRhodes soÂ white Joe Slovo is next to Rosa Parks,â€ says the other, referring to two of the few buildings at the university named after black people.

There has been a growing wave of anger over institutional racism from students atÂ Rhodes University. Things escalated this week following demands byÂ UCT studentsÂ for the removal of the Cecil John Rhodes statue that overlooks the University of Cape Townâ€™sÂ lower campus and the city below. On Wednesday the hashtag #RhodesSoWhite trended on twitter, with students voicingÂ their dissatisfaction with the slow pace of change at the institution.Â Students say they want transformation and for the university to be renamed.