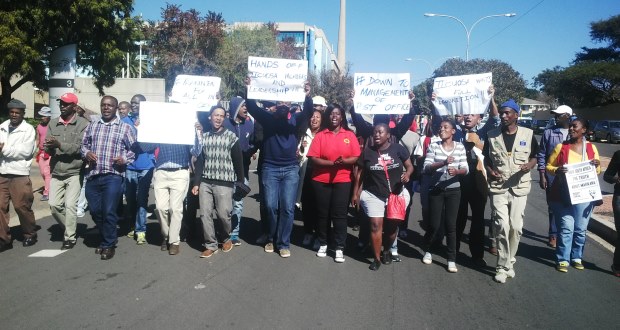 On Monday morning, civil society NGO Right to Know (R2K)â€š together with allied organisations, staged a protest outside the SABC’s Johannesburg offices, where they handed a memorandum to spokesperson Kaizer Kganyago. The protest was in response to the new SABC editorial policy that it will not broadcast property being destroyed during service delivery protests. The Daily Vox spoke to a few of the protestors about their concerns. Simphiwe Zwane, 38, PR councillor and member of Operation Khanyisa Movement, Thembelihle
[dropcap]â€œ[/dropcap]It’s affecting us already because as a community, protesting is the only way we get our message across, so if it will not be noticed, we will get affected. In my community, Thembelihle we will getting electricity soon because of the ongoing protests. Protests [are] our weapon as a community because we sit with politicians in meetings, we sit and discuss many issues but nothing happens. The decision taken by the SABC should be removed. This decision is wrong. If they can show us the war in other countries, what is the issue with protests in South Africa? They want to hide that in South Africa there is informal settlements. They want to hide that people are not happy and not satisfied where they live people don’t have water, because most protests are service delivery protests.â€

Full memorandum:
END CENSORSHIP!
The SABC is being turned into a propaganda machine for the state and ruling party and in recent times we have seen numerous attempts to censor content that embarrasses or is critical of the ruling elite. Programmes and documentaries like Miners Shot Down, Project Spear, The Editors and On The Record have been canned because of their critical content. Among the most alarming recent developments is the decision to ban coverage of violent protest. We will not allow the SABC to whitewash reality and censor footage to protect the powerful. Censorship and sunshine journalism must stop! Lusapho Jozi, 25, R2K member, Pretoria
[dropcap]â€œ[/dropcap][The decision] has affected us as activists of Right to Know because now they are closing us outside to what we have to see as a country. They donâ€™t broadcast the things that we want as a country. They broadcast things that are useless. I came today because I felt my voice should be heard; this is a democratic country, the voices of the people matter a lot. The SABC should broadcast our strikes and our needs. We [as the Right2Know] are addressing what we see that is lacking in our country. In other countries, they broadcast these things like public protests, so in South Africa why is it an issue now? In South Africa they are closing us, itâ€™s like we donâ€™t exist to them.â€ Given Mokgolomotho, 18, Grade 11 pupil, Soweto
[dropcap]â€œ[/dropcap]The decision taken by the SABC has violated our rights because they do not put proper content on TV, like the news, they only put the headlines and not the core stories. They only give us the top stories, they don’t give us the proper information. I think it was worth it for me to come join the people protesting against this matter. Like they say in the ANC, â€œtogether we can workâ€; so I feel I feel like majority counts. The SABC should update us and give us full information, not only the headlines. Protesting is a way of knowing how people feel, because if there is no protests it will mean only individuals will give their say.â€

WITHDRAW THE REVISED EDITORIAL POLICY!
After years of delays, the SABC has quietly finalised and implemented a new editorial policy, but it has failed to properly undertake the public consultation process that it laid out and is obliged to follow through on. The views of the public clearly do not matter to the public broadcasterâ€™s management.

The SABC is a critical institution that has by far the widest reach of any media organisation in the country. Millions of South Africans depend on it for their information needs and it therefore must be accountable to the public. As a public broadcaster, the SABC has a duty to Â inform the public, uphold free expression and deliver news that is accurate, fair and impartial and programming that deals with matters of public interest.

It is a basic principle of ethical media practice that management should not be allowed to interfere in editorial. But the new policy says that content should be referred upwards for approval. It gives Hlaudi sweeping powers to interfere with the work of editors and the final say on any editorial decision. The new policy must be withdrawn and redrafted after a full and meaningful public participatory process! Micah Reddy, R2K Media Freedom and Diversity Organiser, Johannesburg
[dropcap]â€œ[/dropcap]The decision by the SABC will trample on peopleâ€™s right to know and people have a right to know what is happening in the country. Protests are usually about issues of public interest. We live in a country of systemic violence, and to cover that up, to pretend it doesnâ€™t exist, does nothing for our right to know. Itâ€™s also very condescending to audiences. It assumes that we need to be protected from ourselves basically. It assumes we cannot make up our minds, we cannot view violence on TV critically. It assumes that the public broadcaster must be very selective in how it informs us. We canâ€™t be presented with the truth because the truth is too uncomfortable or unsettling; itâ€™s very undemocratic and patronising. Most people rely on the public broadcaster for their information needs, and if the public broadcaster is delivering us propaganda and sanitised news, obviously that’s a bad thing for fostering an informed public. The SABC needs to withdraw its foolish undemocratic policy basically it amounts to censorship. It needs to withdraw the decision of coverage of violence and protests.â€

HLAUDI MUST GO!
SABC COO Hlaudi Motsoeneng is unfit for the job. The Public Protector found in 2014 that he lied about his qualifications; that he purged senior staff; that he ignored regulations by increasing his salary from R1.5 million to R2.4 million and he hiked the salaries of other staff, inflating the salary bill by R29 million at the struggling broadcaster. Last year, the High Court ruled that his permanent appointment as COO was â€˜unlawful and irrationalâ€™.

And yet, Hlaudi remains in his seat, steering the SABC from one crisis to another. Why? Because he is blindly loyal to those above, like Minister Faith Muthambi, who keep him in power. We do not want political lackeys running this crucial public institution. Hlaudi shows no respect for the ideal of editorial independence, he views good journalists and the profession of journalism with contempt, and his actions are consistently in violation of the Broadcasting Act and SABC Charter. Hlaudi must go! The SABC can expect further mass action until our demands are met.