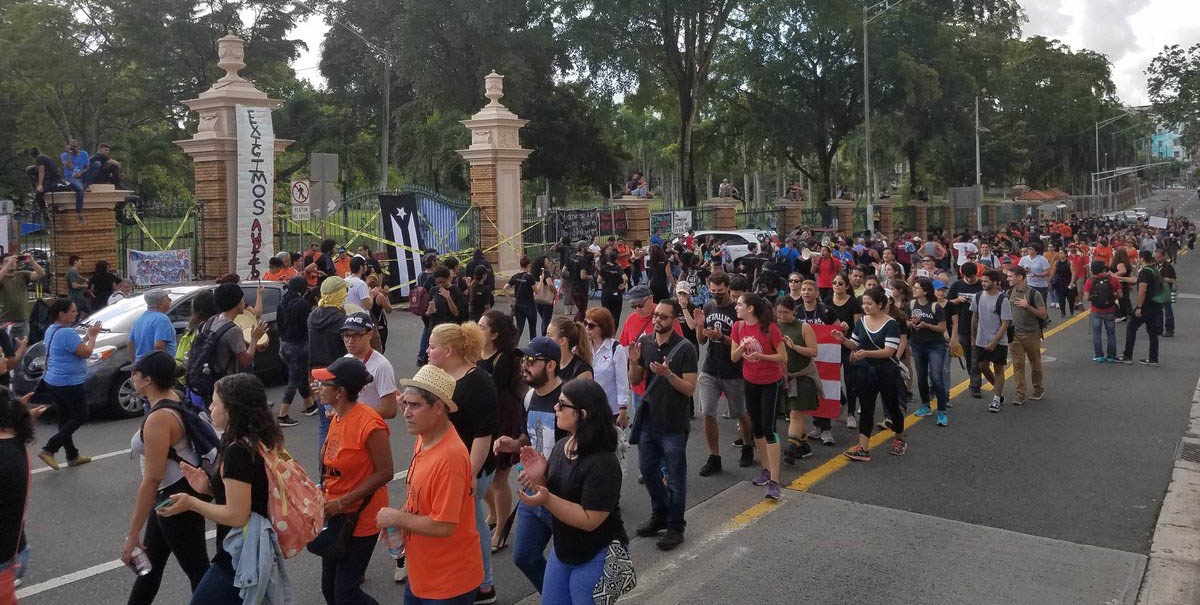 As word of an indefinite strike at the University of Puerto Rico over austerity plans breaks international media headlines, one cannot help but read the Puerto Rican context as something that speaks to the ongoing struggle of their contemporaries in South Africa. Often when transnational dialogues are invoked, the United States is the subject of discussion. Today through the ripples from San Juan we unpack the context under which the fight against austerity and modern-day colonialism takes place at the university as a site of struggle.

Puerto Rico holds a complex history for its size. The physical territory located in the Caribbean consists of an archipelago, with a main island housing its capital San Juan and a number of other islands surrounding it. The predominant indigenous peoples to the region, the TaÃ­no, encountered colonialist Christopher Columbus in 1493. This marked the first of several European conquests on islands including by the French, British and Dutch empires. The island’s colonial economy made heavy use of enslaved Africans sourced through the transatlantic slave trade and used primarily in its sugar plantations.

Calls for independence accelerated after the formal abolition of slavery in Puerto Rico in 1873. By the end of the 19th century, the territory had been granted partial self government as an overseas province of Spain, not unlike the conditions of Angola under the Portuguese empire prior to independence. Shortly after, the Spanish-American war culminated in Puerto Rico ceding to the United States of America. While citizens born in the modern day colony have access to US citizenship, they cannot participate in the vote for the president, nor can the territory itself vote in the US Congress.

In the year 1900, during the reconstruction period, the Escuela Normal Industrial (Normal Industrial School) was established with only 20 students and five professors, primarily to train teachers. In the century that followed, the institution later incorporated liberal arts, agricultural, natural science and engineering programmes. As the institution grew, the students joined the national liberation, civil rights and independence movements of the 60s and 70s, in significant numbers, politicising the campus through protests in the face of government repression.

In more recent times, historic protests between 2010 and 2011 at the University of Puerto Rico forced its Rio Piedras campus to shut down for 80 days in response to austerity measures, triggered by the 2008 global recession, that included brutal public education spending cuts. In the article â€œVictory Defending Education in Puerto Ricoâ€Â Kate Frey maps the context of the protest and describes the devastating impact of the protest that was said to have cost the university over $305 million while securing concessions for students on financial aid, the postponement of tuition hikes and, crucially, prohibited alliances leading to university privatisation.

Similarly, the South African student protest for FeesMustFall in particular arose out of demands to decommodify and decolonise the education system, in part through a demand for fee-free education. The thrust of the demand arrived in the context of the deep underfunding of universities, hiking tuition fees along with inefficient and sometimes exclusionary practices of the National Students Funding Scheme (NSFAS).

Nelson Maldonado-Torres, an associate professor at Rutgers University USA, met with student activists at the University of Cape Town (UCT) off the heat of the FeesMustFall protests of early 2016. Several of the students participating in the protests had been banned from campus grounds by court interdict, so Maldonado-Torres addressed them in a park just off campus.

He linked decoloniality theory from the Americas to some of the arguments being made during the South African campaigns, by relating and analysing the University of Puerto Rico protest of 2010. In his speech he referenced to the importance of broader community buy-in and participation in the protest but also the use of performance art, street art and other creative, disruptive methods during the context of the campus shut down.

This aspect has resonance in the South African context, as captured by Leigh-Ann Naidoo during the 2016 annual Ruth First Lecture, where she highlighted the potentially creative, generative and fundamentally disruptive possibilities that come with re-appropriating the time and space of the university in the context of protests.

Later in 2016, Maldonado-Torres met with the popular education collective â€œPathways to Free Educationâ€ and discussed the tactic of â€œUnited Frontâ€ as it was applied at the University of Puerto Rico in an engagement for how to think about structuring the student-worker protests at the time.

One of the standout differences appeared to be the forms of democratic decision-making that were used. While RhodesMustFall and FeesMustFall in the UCT context, for example, favoured free-form direct democracy approaches, students from the University of Puerto Rico used popular assemblies hosted by the student union as a device to make collective decisions and to ratify and resolve protest and negotiating principles. In the South African context, the Student Representative Councils were instead regularly accused of helping the administration break the protests the SRC were not in control of.

As the South African student movement remains embattled with factionalism and endless legitimacy crises, it would be interesting to establish more sustained dialogues with students at the University of Puerto Rico to learn lessons from how they were able to conduct a stable protest over long periods of repression.

Looking towards the present day, the Rio Piedras campus finds itself embattled in another indefinite protest after the United States government proposed a three-year US$450 million budget cut. The students have made connections between the new austerity measures imposed on the higher education system as part of a general push back against social spending on public education, healthcare and social housing more broadly. They have joined forces to form a united front with two majority unions on the campus, including the Hermandad de Empleados Exentos No Docentes, the union representing maintenance workers on campus, as well as the Association of Puerto Rican University Professors, demonstrating the need to build broad-based coalitions for sustained large-scale public action. While the task ahead remains steep, in a country under colonial administration and a growing economic crisis, the resilience and determination of protesters offers strength and potential inspiration to the difficult years ahead of South Africa today.

Amidst the furore around decolonisation in South Africa, it has become routine to think of the formal colonial era as something from decades past. However, contemporary cases like Puerto Ricoâ€™s demonstrate the urgency of engaging in debates that fall outside mainstream narratives. While the ongoing struggles in Puerto Rico may not be widely covered in our media there is much we can learn from one another if we are willing to look beyond what is immediately available.

With the growing list of neoliberal rating agencies downgrading South Africaâ€™s credit rating to junk status, the fight against increasing austerity and modern day colonialism is set to intensify. It is precisely in these moments when the need for transnational dialogues must be emphasised and so we welcome the ripples from San Juan and pray that tomorrow they may roll into unstoppable waves of resistance.