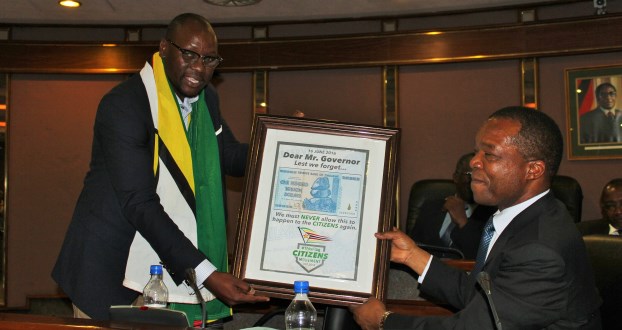 From camp-outs to petitions, young Zimbabweans are finding alternative ways to organise and express their frustration with a worsening economic crisis and political repression. As the government resorts to shifting civil servant pay dates and considers re-issuingÂ  the fallen rand, Zimbabwe’s young people are digging in their heels and continuing their resistance.

Through winter’s cold nights, an Occupy movement of roughly two dozen protesters endured threats and assaults for squatting in Harareâ€™s Africa Unity Square and calling for President Robert Mugabe’s resignation after 36 years in power. The activists planned to camp out in the park opposite parliament for 16 days and nights, but by the eighth night, up to 17 of the occupiers had been accused of theft, rounded up and imprisoned for just over a week. They were only released after a negotiated bail of a total $3,200 was paid.

Occupy Africa Unity Square (OAUS) was charged with stealing a bag containing $80, but the group believes these were trumped-up charges designed to frustrate their efforts. In a telephone interview with The Daily Vox, OAUS Spokesperson, Dirk Frey, said the group were undeterred and have resumed a one-hour (5pm to 6pm) daily occupation of the park led by Patson Dzamara. Inspired by the disappearance of Dzamara’s brother, abducted activist Itai Dzamara, OAUS will not be scared into silence.

â€œEven after all the attempts to frustrate us, we want to be very clear that we’re not stepping back; we’re continuing with our daily sessions and preparing for our next move strategically. We’re not going to allow the state to intimidate us.Â We have a right to protest under the Constitution and the police have a duty under Chapter 4 to promote that supreme right so they must do their job and stop harassing us,â€ he said.

On Monday, OAUS resumed its #5to6 attempt, but demonstrators allege they were assaulted by riot police. The group vow to press on, but occupying in Zimbabwe is no easy feat.

This is why some similarly frustrated citizens have chosen the digital route.Â #ThisFlag, is a social media campaign that began as a pastor’s video lament over his inability to pay his children’s school fees as a direct result of the current economic situation. Launched in April by Pastor Evan Mawarire, a church minister, the videos have grown in popularity after the first recording gained more than 100,000 views in its first five days.

Last week, #ThisFlag, held an audience with the Reserve Bank Governor, John Mangudya, who claims that bond notes are intended to ease severe cash shortages and stimulate exports. But, as displayed at the forum, many Zimbabweans are distrustful and fearful the â€œfunny moneyâ€ could mean the return of the hyper-inflated Zimbabwe dollar. Since 2009, when the local currency was declared obsolete, several foreign currencies including the US dollar, South African rand and Chinese yuan were introduced for daily use and export trade.

Unconvinced by Governor Mangudya, the hashtag movement has now taken the Minister of Finance to task over the proposed bond notes. In keeping with their promise to speak out against corruption, they petitioned President Robert Mugabe to dismiss the Minister of Energy and Power and Development Stan Undenge over an unprocedural $5 million payout to an energy contractor. Spurred by the successful staging of #ThisFlag’s first significant act of public protest, Mawarire told The Daily Vox that it was a sign of citizen victory and a potential start to more acts of passive resistance.

â€œThis is a victory for us as citizens as so far; we have shown that we can move from the fringes to the centre of power and we’re able to create our own space from which we can speak without fear,â€ he said.

A mix of desperate hope and hype, both #ThisFlag and Occupy Africa Unity Square have struck a chord with the urban young within Zimbabwe and beyond. However, as social movements still in their early stages, some remain concerned about the extent to which the campaign could result in effective citizen engagement that might bring about the change the movement hopes for. Â On the contrary, political analyst, Takura Zhangazha, feels that given Zimbabwe’s repressive climate, it’s more important to support all forms of alternative protest, rather than examine their impact.

â€œThese are new forms of expressing what is deep anger at the current state of affairs in the country by young Zimbabweans.

These forms of protest largely driven by social media should be encouraged more than they are judged on whether they are pragmatically effective or not.â€ he said in an email to The Daily Vox.

The rise of minor urban movements saying â€œenough is enoughâ€ might be a strong indication of the growing anger against President Mugabeâ€™s alleged failure to run the country. And even though speaking out remains a fearful act in Zimbabwe, young people are finding other ways to speak because, perhaps, the unshakable fear that Zimbabwe once again faces economic collapse akin to the unstable 2000s, may be much greater than the baton.

Featured image:Â #ThisFlag leader, Pastor Evan Mawarire handing the central bank governor a picture to remind him of the hyper-inflation era at height in 2008 as a way of saying “Zimbabweans do not want to go back there”. By Tendai Marima.