Home Features The #RUReferenceList is testimony to the failures of the justice system for...
WhatsApp
Facebook
Twitter
Email
Print 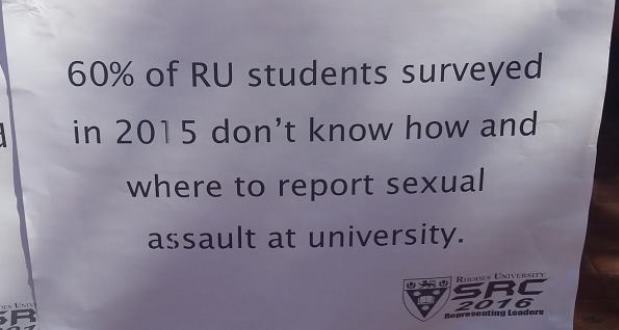 This week, a list circulating on Facebook named a number of men who are alleged to have committed acts of rape at Rhodes University. The objective of the list appears to be a demand for justice, or some kind of meaningful recourse for the survivors of sexual violence at the university.

The criminal justice system is rigged against survivors of rape. Over and over again, the testimonies of victims of sexual assault have shown that the system is designed to impede access to survivors of sexual violence. And the numbers show it too. Research released last year showed that that the processing of rape cases is often â€œinconsistent and riddled with problemsâ€. The report revealed that of the 62, 649 sexual offences cases reported between 2013-2014, just 5, 484 resulted in convictions, while the rest never even made it to court.

Prosecutors quoted in the report by Times Live, said that prosecutors regularly declined to take rape cases to court if they felt that the evidence presented wasnâ€™t strong enough. â€œIf there is no corroborating evidence, it becomes a case of his word against hers,â€ a National Prosecuting Authority official said.

The system in place at Rhodes University is similarly flawed.

Students at Rhodes say the process they must engage to report sexual violence at the university shames victims and protects perpetrators.

â€œWhen Rhodes University deals with rape, thereâ€™s this attitude of ‘donâ€™t go and get drunk and walk home alone or else youâ€™ll get raped,” Rhodes SRC’s Naledi Mashishi told EWN.

Soon after the reference list was circulated online, students gathered to protest against the presence of some of the men on the list on campus. The following day, a list of demands was read out by Sian Ferguson and Dominique McFall of #Chapter212. These demands include changing Rhodesâ€™ policies towards sexual assault, a call for one of the men on the list to step down from an SRC leadership position, and the establishment of a task team to manage rape and assault cases on campus.
In response, Vice Chancellor, Professor Sizwe Mabizela, told SAFM that Rhodes had established a task team to deal with rape and sexual violence at the university.

Mabizela is quoted to have said that while it’s very difficult to talk about issues of rape, one rape is just one too many adding that when they are given information on rape, they act.

Editors’ note: A journalist working with The Daily Vox was named on the Rhodes reference list. The journalist has since been placed on a leave of absence while we conduct an enquiry into the allegation.Â The Daily Vox is committed to principles of social justice. Inherent to the promotion ofÂ social justiceÂ is the rights of survivors of sexual violence to pursue justice. We support allÂ calls to end sexual violence.