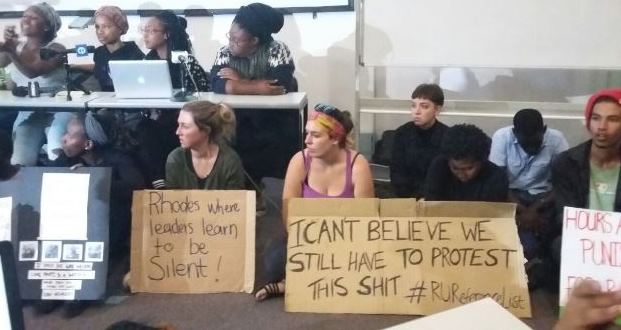 The protests around rape culture and the #RUReferenceList have been deeply triggering for many survivors of rape and sexual abuse. Rhodes journalism student, THANDI BOMBI, imagines what an exchange between one such survivor and her therapist may look like.

His smile was not as bright as it usually was. His eyes were fatigued, for a second she wondered if he had cried this week. She would not be surprised if he had cried. She had cried, she had seen people crying â€“ it had been a week of mourning.

He ushered her into his office. He said something about the window and ventilation but she heard nothing. For the longest time she had been holding back the emotion the weight of the protest had brought out in her and she knew she felt safest letting it out in his office. She sat down and politely smiled before asking if she could begin. He smiled politely and explained that she was safe to speak or not speak; that this was her space and that he would help her through whatever she was feeling.

The floodgates opened and she told him her story.

“I’m not exactly sure how to articulate myself,” she said. “I hate the way this week has left me feeling.”

“I am worried about the validity of my feelings, my fears.

“I am triggered by a person who doesnâ€™t think anything he does in relation to me is wrong.

“I was not raped at Rhodes and yet I want justice. I know I can’t get it for myself, the men who used my body for self-gratification will never know the wrath of the law but if one girl can get justice for her rape then I have to fight for it,” she said.

They had spoken about rape from the time she had first started seeing him. She was able to say the word and explain how the idea of it made her feel but even with him she was unable to say that what happened to her was rape. The word alone was enough to break any spirit and she knew if she ever announced it to herself or anyone else, the image of strength she had constructed herself as would be tied to three or four disgusting men who had taken advantage of her in her most vulnerable state.

Her therapist had watched her tear up over the issue before but now her tears flowed continuously from her face. She was unable to control them. Every drop symbolised a part of her breaking heart and although this process was part of her healing, he was unable to look at the pain she now fought through in her alienated journey.

“What I still don’t understand is, why was this not taken seriously from the moment it began?” she said while looking him dead in the eye for answers he didn’t have. “When a person says they have been violated, why are they not instantly protected? Itâ€™s not fun being triggered, itâ€™s not fun looking at the police and fearing them with the same fear that one fears rape.â€

“They don’t realise the trauma they have put us through,” she said as she wiped her tears away. “My feelings of fear and rape now extend to the police, so tell me if I was to get raped now where would I go to find justice?” she asked sincerely.

He looked at her. He was pained by her questions. She asked them simply because she wanted answers, answers he was unable to give her.

“I stood with a sign saying ‘I canâ€™t believe we still have to protest this shit’. I did that because that is what I believe, but in that moment all I could think about is what if I am seen in this protest. What if my rapists see me fighting against what they did? What if my family members who have been accused of similar things see me? I will have to account for my actions in ways they will never have to because of the way rape is constructed in our society.”

The pain was unbearable for her at this point. She had been able to hold back her emotions the whole week but was now falling apart. She knew this was her only safe space but time was running out. He had other heartbroken clients to see.

“Please help me understand how triggers work?” she asked him. “Am I allowed to be uncomfortable around someone who, to me, resembles the person who raped me when I was seven?” She continued, “It’s not only that he looks the same way, he is equally as manipulative and he always touches me without my permission. Am I crazy for wanting to break down when I see him at the protest singing the loudest about Igama Lama Khosikazi Malibongwe?

“I thought I might be acting irrationally because itâ€™s just a trigger, right? It exists in my head alone, I have made the construction,” she said.

“But thatâ€™s not true because somehow he ended up next to me and brushing up against me. There was enough space for him to not touch me, yet he did it anyway. He knows I hate it; I have told him that many times before. He feels entitled to my body the way my rapist ‘was’ and I feel it in every stroke.

“I just need to understand triggers so I can validate my feelings of fear towards this guy,” she explained. “My whole life, my experiences have been hushed and therefore my worst fears have been left to roam around my head without any validation. I need to know itâ€™s okay to want to run away from certain people.”

“Iâ€™m going to stop you right there,” he interrupted. “You have every right to feel uncomfortable when someone makes you feel uncomfortable. It does not need to be validated, if you don’t want someone touching you, then they should not touch you no matter what.”

She looked up at him for the first time since she sat down. He didn’t know that this was the issue she fought the hardest with. It’s one thing for other people to not believe you, but when your own brain tricks you into thinking things are okay as a coping mechanism, then there is no hiding. She called it ‘self-silencing’, the kind of suppression a person resorts to when she has been convinced that she is the one responsible for her rapes.

She looked up at him. She had told him so much about her life that she was shocked to hear these words. At that point, she realised he knew a lot about her life but actually knew nothing at all. She had managed to get away with omitting this fundamental part of her existence but was not ready to work through it with him.

“Would you like to know what happened when I was seven years old?” she asked. Disappointment crossed his face.
“We can talk about it if you are ready, but we have three minutes left so I don’t know if we should start today.”

She looked back at the clock that hung behind her chair. She smiled. It was a smile to hid her sadness, the sadness of that moment. Her time to be sad was over. She had to go back to the world and pretend. She had to walk out of the safe haven and into the world where protesting rape is met with all kinds of violence.

“Thank you so much,” she said. “This has helped me so much; I feel a lot better now.”

She carried her lie home with her. It sat and watched her have her second glass of wine before her first meal of the day. She fell asleep next to it while it wiped away her tears. This is the lie that would get her through the week. She was okay with that. Similar lies had helped her through her childhood. But it was these lies that the therapy was supposed to uncover.

Thandi Bombi is a 4th year Journalism and Media Studies student at the University currently known as Rhodes. She is majoring in writing and editing. Although she enjoys writing short stories the most, her passion for writing extends to all forms of writing. Through her writing, she wants to give a voice to some of the issues black women have to go through in South Africa.