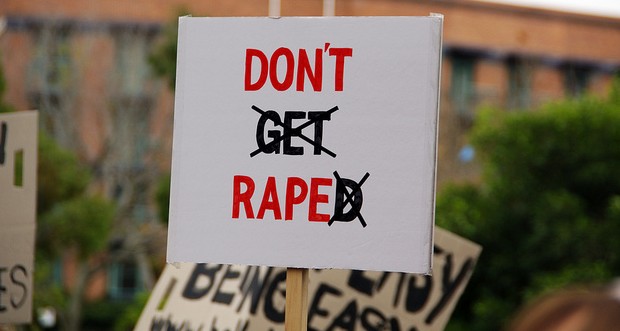 TheÂ release of #RUReferenceList has forced scrutiny on the policies and systems available to survivors of sexual violence at South African universities. HELEN MOFFETT reflects on her own experience of sexual harassment at UCT and she’s reminded that as much as perpetrators of sexual violence must be held to account, so too should the “decent” men who offer platitudes and excuses when sexual assault is reported to them.Â

If you’re not sure what it means to be “triggered”, look at how nearly every woman who’s ever been sexually harassed or assaulted while a student (especially by her peers, lecturers, tutors and supervisors, rather than a “stranger-outsider”) is feeling in response to the current protests and anguish at Rhodes University. I don’t hold with public “outings”, but dear Goddess, Rhodes, along with most South African universities (in fact campuses across the globe) have brought this on themselves, courtesy of their persistent head-in-the-sand attitude to misogyny (both overt and covert) and sexual violence on campuses. Social media has produced many thoughtful comments, but I find I need to get this off my chest: if everÂ the truism that for evil to flourish, good men need only do nothing applies, it is in these cases.

Decades ago, I got sucked into a particularly horrible (and career-ending) sexual harassment case at UCT after theyÂ approached meÂ asking for “corroborating evidence”. (This is for context only; one of my dearest friends pointed out to me that by burning that particular bridge, I accidentally kickstarted a much happier career.) But it was in that toxic environment that my HOD, alone with me in a corridor, said “Why did you disagree with me in that meeting? Just you wait until we appoint examiners for your PhD. I’m going to get some feminist-hating misogynists who will pull your work to pieces.” I did everything a young woman grad student tries in those circumstances: first I pretended he was joking (“Ha, ha, so funny”), then I tried pretending this was a concern about examiners (“I can provide a list of qualified academics, if you like”). I was shouted at, the threats repeated. There were no witnesses, and the conversation ended with him pushing through a swing door into the Dept office and slamming it in my face.

I retreated to my office, in tears of shock and distress. Eventually I rang a close friend over in the Law Faculty. “You haveÂ to tell someone senior in the university hierarchy asap,” she said. “Even if he’s just bluffing, if he does get you a hostile examiner, it will be too late to complain by that stage.” Next I rang my father, himself then Dean of Science at another university. He gave me the identical advice: I had to let my Dean know immediately (in those days, there were no hotlines, no official channels for complaints of this nature).

So the next morning, I went off to see the Dean of the Arts Faculty. It was a beautiful autumn day. I still remember what I was wearing. And this is the crux of my story, the bit that’s choking me 24 years later: he was (and still is) a decent man. A good man. He was a colleague in the same department. And after I told my story, this is how he responded; in kind and gentle tones, he said: “He [the HOD] didn’t mean it.”

Just let that sink in for a moment. “He didn’t mean it.” The Dean went on: “I’m sure he was joking. Not very funny, but just a joke. You have to understand, he’s under tremendous stress at the moment.”

YES, THOSE WERE HIS WORDS. I WROTE THEM ALL DOWN IMMEDIATELY AFTERWARDS, AND THEY’RE IN A LEGAL DEPOSITION. This is not fuzzy hindsight or imperfect recall.

It didn’t end there: I was told that a committee would appoint my examiners, that my HOD didn’t have the power to pick a hostile examiner. (Really? He had the power to block the second year disbursement of my HRSC bursary, losing me a year’s income, he had the power to de-register me from my PhD programme without my knowledge, he had the power to take away my university medical aid, on all of which occasions the university administrators had wrung their hands feebly only afterwards, but I was supposed to believe that in the case of a degree I’d given four years of my life to, the university would do the right thing in the face of an overt threat?)

By now, I was crying. Again. The response (and you all know what’s coming, right?): “There, there, you’re being emotional about all this.” I got up to leave, and at that point, the Dean said, “I’m sorry you had this experience. Not very nice. Tch tch.” AT WHICH I THANKED HIM. Because that’s what women in their twenties who are at the mercy of a hierarchical university system do.

This man is remains a decent human being, as far as I know. My beef today is not with the vile HOD, who may or may not have redeemed himself in the intervening time. It is with the decent man who told me I was imagining evil. Who has never, ever apologised to me for doing so. Who has never acknowledged that he trivialised a horrific and scarring experience, one that will have thousands like me nodding their heads in recognition.

And although I hold with due process, and conflict resolution without violence, there is a small part of me that could cheerfully burn down every campus populated by decent, well-meaning men (and women) who have spent decades telling traumatised young people: “There, there. He didn’t mean it. I’m sure you misunderstood. Maybe you’re over-reacting. It was just a joke. He must have been drunk. He’s under huge stress, you know. Now, now, you’re getting emotional.”

DEAR “DECENT” MEN AT RHODESÂ & OTHER CAMPUSES: YOU ARE REAPING WHAT YOU HAVE WATCHED OTHERS SOW — WHILE MAKING EXCUSES FOR THEM. Your hands are also dirty. â€ª#â€ŽRUReferenceListâ€¬ Helen Moffett is an editor, poet and activist. Read more about her here.Â

Editorsâ€™ note: A journalist working with The Daily Vox was named on the Rhodes reference list. The journalist has since been placed on a leave of absence while we conduct an enquiry into the allegation.Â The Daily Vox is committed to principles of social justice. Inherent to the promotion ofÂ social justiceÂ is the rights of survivors of sexual violence to pursue justice. We support allÂ calls to end sexual violence.